As Jane Powell, Kathryn Grayson and innumerable state-level pageant contestants have so often reminded us, “Love is where you find it, / Don’t be blind, it’s / All around you, everywhere!” And so it is with good singing in the Met’s current Italian opera performances: it’s there, but you do have to do some digging to turn it up.

In last night’s revival of Verdi’s Il Trovatore, for example, it was very hard to love Yonghoon Lee’s blatty and blatant attack on the leading role. The title of the opera means “The Troubadour,” that is, someone who makes his living as a poet and singer, but this kind of art doesn’t seem in Lee’s wheelhouse.

Everything seemed focused on making the loudest and longest high note possible at the end of the aria “Di quella pira,” an effect Lee accomplished only by omitting half the music and finally striking a squatting pose, which indicated not so much heroic defiance as acute constipation.

Opposite him, as the self-sacrificing noblewoman Leonora, Jennifer Rowley shoved her medium-weight soprano violently off-pitch with a juddering vibrato. Now, it is true that some of history’s greatest sopranos have sung sharp from time to time: Zinka Milanov, Leonie Rysanek, Anna Netrebko. But there were times last night Rowley seemed literally to have landed in the wrong key.

I hate to be prescriptive, but it seems to me the singer might better have spent her time working out this technical issue instead of interpolating that pair of tasteless and hard-edged high C’s in the final act.

The contrast could not be greater with Anita Rachvelishvili’s eloquent portrayal of the beleaguered Azucena. Yes, she flung out her big, red-blooded mezzo in great cries of despair, but those were set in relief by exquisitely musical gradations of volume from pianissimo to mezzo-forte.

Particularly lovely was her take on the nostalgic “Ai nostri monti” in the last act, sung with a sweet and childlike timbre. It was as if in her last moments of life, the tormented woman found refuge in an untroubled past.

If baritone Quinn Kelsey didn’t quite scale such towering emotional peaks, he did accomplish the daunting task of singing the demanding music of Di Luna with the elegance suitable to a nobleman in love.

At most performances of this opera, listening to “Il balen del suo sorriso” is like watching a tightrope act: so many things can go wrong. But when Kelsey spun out the aria with perfect legato, one could relax and, for once, appreciate the dramatic point that the character thinks of himself as not so much evil as simply lonely.

Perhaps best of all, the Met chorus sounded youthful and vibrant throughout, and the women portraying nuns in the second act even managed the practically unprecented feat of staying in tune during their offstage prayer. I only wish some of their musicianship would rub off on conductor Marco Armiliato, who took big, disfiguring cuts in number after number.

In Donizetti’s L’Elisir d’Amore on January 16, the finest performance was an Easter egg indeed: the crisp, rangy baritone of debuting Davide Luciano caught the ear from the very first phrases of his opening aria. He outshone both Matthew Polenzani’s Nemorino (his “Una furtiva lagrima” felt a little calculated), and Pretty Yende’s Adina, marred by intermittent loss of focus in her pearly soprano. 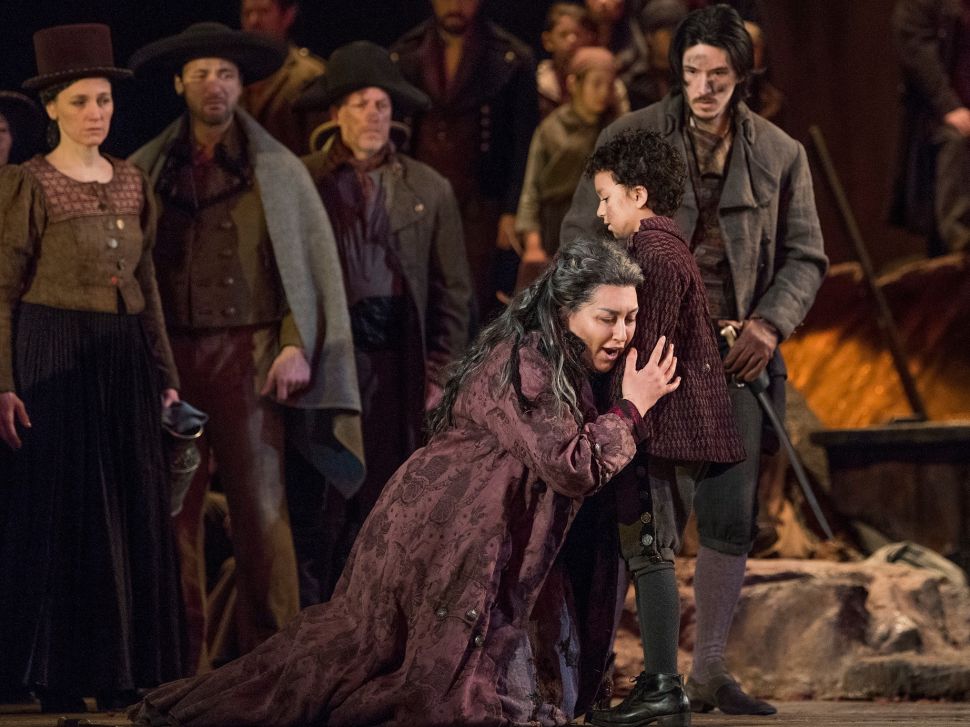