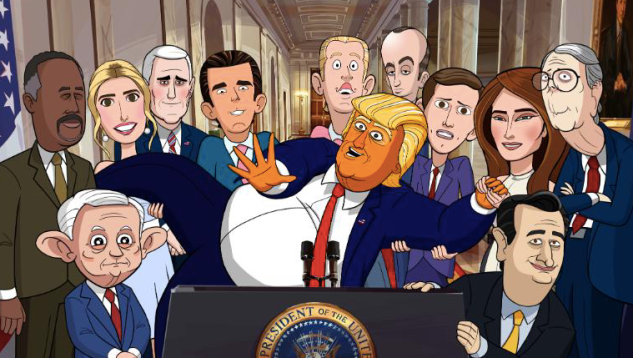 In this time of chaotic politics, one thing can be counted on—that the late-night talk show hosts will be riffing on the day’s news with an insight that’s both humorous and spot on.

Now, one of those hosts is taking it a step further—by using the world of animation to poke even more fun at the current leader of the free world.

From the team behind The Late Show with Stephen Colbert comes Our Cartoon President, a hilarious look into the Trump presidency, animation style. Starring two-dimensional avatars of Trump and his merry band of insiders and family members, the comedy series presents the true-ish adventures of the president. It’s a timely political send-up of the always colorful Commander in Chief. And, according to Colbert, “It’s yuge, and you’re going to laugh bigly when you see it.”

At a recent press event, Colbert and fellow show executive producer R.J. Fried talked about how the rapid news cycle is affecting both the late-night series and the new animated show, with Colbert explaining, “I’m well aware of how fast the news is moving these days. Many is the day, at 5:15, we have to throw away, like, no shit, ten minutes of [The Late Show] monologue and just push the show back and rewrite it in the moment.”

Speaking specifically about how the velocity of news coming out of Washington will be portrayed in the new series, Colbert said, “The purpose of this show is not to respond to the references of today’s news cycle. It’s about what’s going on behind the doors of the most important house in the world with the most important man in the world.” 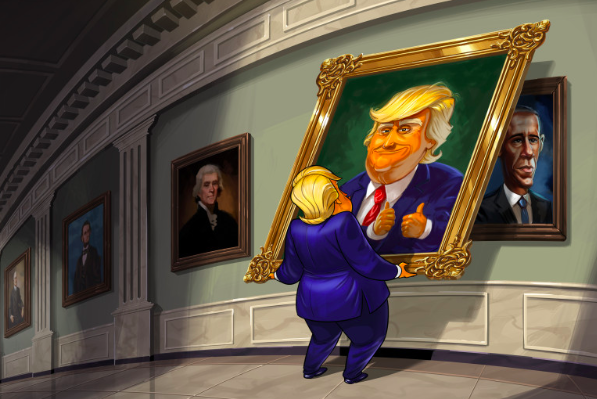 But Fried explained that there will be some timeliness to the narrative. “What we’re going to do is have a cold open scene. The first scene of the show is something that we’re going to write and animate that week and update right up until airtime.”

Colbert went on to say that Our Cartoon President is primarily about, “the interpersonal relationships of the people that you don’t get to see, all the relationships you imagine they have, animated, which I think at this point is the only way to truly accurately capture what it must be like to be inside the White House.”

“We have the benefit that this is a White House that has been very characterized by leaks,” added Fried. “And, we do get a lot of press reports, perhaps more than we’ve ever had. So, we get a lot of insight.”

Talking about what Washington figures will appear as animated characters, Colbert said, “Well, we’re not investing a lot of animation time into Rex Tillerson at this point, But Melania’s not going anywhere. Jared, on a daily basis, gets more attention from the writers than other days. Jeff Sessions has his own motivation…but it’s basically all the cabinet members [who] think they can ride the tiger for their own purposes.”

And of course, there’s the extended family. “The Trump brothers are wonderful characters in this show,” said Fried. “There are Beavis and Butthead, Don Jr. and Eric. They are so much fun to write for.”

Colbert added, “And their motivation is they want to please their dad. Ivanka wants to build her brand.”

Discussing the production cycle of the series, Fried explained, “Right now we’re taking about two or three weeks to write each episode. Overall it takes about two to three months to animate an episode. That said, over the course of [the production], the show is constantly updating based on if something crazy happens.”

Since the series is debuting on the heels of the newly published White House tell-all Fire & Fury, Colbert said, “I think Michael Wolff stole all ten of our episodes to write that damn book of his, because there’s nothing in that book that’s not in our show. And we just guessed. I’m not joking.”

The creative team behind Our Cartoon President is well aware that there’s currently another show lampooning the current administration on Comedy Central. The live-action series The President Show, stars Anthony Atamanuik, as the title character.

Comparing and contrasting the two shows, Colbert said, “I think reality versus cartoon is a base coat that changes it. Anthony’s great at doing the president but [our show] is actually, in some ways, like a ‘realer’ cut at the voice and characterization than what Anthony’s doing.”

Asked about the possibility of “Trump Fatigue,” Colbert, smiling broadly, responded, “He’s the President of the United States. There’s no escaping him. It’s like having oxygen fatigue. That’s why I like doing the comedy. It keeps me from being fatigued. If I didn’t get to do the show, I’d be much more tired of the president, but it keeps it fresh to be able to laugh at the devil.”

Does Colbert have any concerns about normalizing the President? “No!” He said very emphatically. Then he added, “I don’t think there’s anything normal about his behavior as a cartoon. The subjects we’re picking are dark enough that they reflect the truly cartoonish behavior in the actual 1600 Pennsylvania Avenue. We want to keep reminding the audience that, while we’re doing a comedy [show], this behavior is really not what you want in the White House.”

Hoping that that series has longevity, Fried chuckled as he said, “Honestly, if the President needs to stay in office longer so that we can have more shows, we’re all for that.”

Colbert sarcastically smiled at this…and cringed, at the same time.

The first episode of Our Cartoon President is available for streaming on Sunday, January 28. The series premieres Sunday, February 11 at 8:30 p.m. e/p on Showtime. 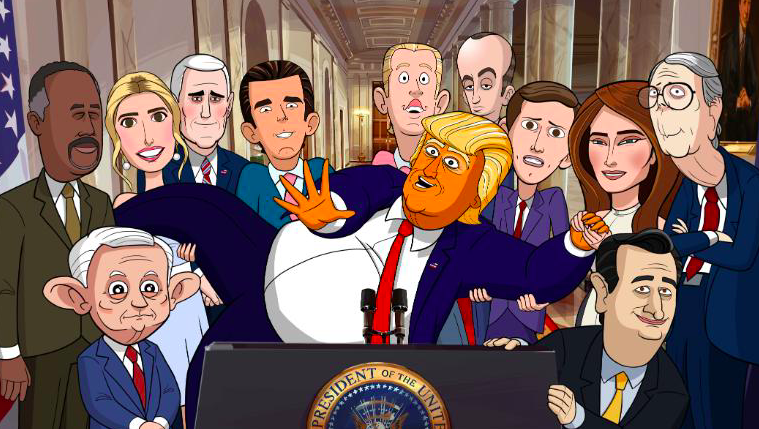