Steven Spielberg’s The Post is one of the most important films of the year.

Hey, just because it’s obvious doesn’t mean it isn’t true. Of course the filmmaker behind other recent “important” movies like Bridge of Spies and Lincoln is going to aim for our social conscious. But The Post is especially relevant in a time when our president labels any media coverage he doesn’t like as fake news and where opinion and truth are becoming dangerously interchangeable in the media.

The film follows the staff of The Washington Post, led by executive editor Ben Bradlee (Tom Hanks) and publisher Katherine Graham (Meryl Streep), as they try to obtain and publish the Pentagon Papers in the face of government opposition. That is weighty material not only because of the prodigious ramifications it had on this country in the 1970s, but also for the long-reaching effects that have reverberated throughout journalism and politics ever since. Yet somehow, Spielberg managed to squeeze the enormity of that story into just seven quick months of filming, barely an inch of column space in newspaper terms.

“If I had a year and a half, the movie wouldn’t be as good as it is right now,” Spielberg said during a Q&A for The Post at an advanced screening at the great Jacob Burns Film Center.

Spielberg is a master filmmaker, this we know. But delivering a potential frontrunner at this year’s Academy Awards so quickly while still working on March’s Ready Player One is impressive even by his lofty standards.

“I called an audible before I started shooting this movie,” he said. “There’s not a single storyboard that I used to make this movie. I just made all the shots up on the day. I had a basic plan of how I probably wanted the script to feel. I knew that Josh [Singer] and Liz [Hannah] had written a script that had no fat on the bones. We even cut scenes to make it even more propulsive.

“But every single shot was discovered through the discovery of the actors’ performances. When you get performances like this and a company of actors like that, the shots are coming at me fast—I’m having trouble keeping them in my head how I want to shoot the scene—but I came to work every day with an open mind without a shot list…The same way the actors never rehearsed, everything was done in the moment and very spontaneously.”

Normally, most major films undergo an extensive pre-production schedule in which every minor detail is planned and accounted for. That includes storyboarding each and every shot so that the cast and crew know exactly what they’re doing and how they’re doing it each day. But Spielberg, who was infamous among studios for going over schedule early in his career, went the opposite way with The Post. You’d never say the film was an improv tour de force like a Seth Rogen comedy, but it’s clear that the director embraced a more organic approach to this historical story.

It’s a risky strategy, especially for a journalism-based prestige drama that cost $50 million and was already operating on an compressed schedule. It’s not as if the genre is a blockbuster money maker (2015’s Spotlight earned $88.3 million worldwide off a $20 million budget). But the studios let Spielberg work in his own fashion (as if they would be able to do otherwise) and it appears to have been the correct call.

“We made this picture with the most amazing amount of equanimity and the most amazing amount of solidarity,” he explained. “I couldn’t wait to get to set every morning because we felt we were telling a story of our times. We’re telling the story of resiliency, honesty and dedication of the whole career of journalism…Some would have us believe that there is no difference between beliefs and facts. We wanted to make a story where basically facts are the foundation of all truth and we wanted to tell the truth.”

The Post has received nearly universal praise from critics ahead of its wide release later this month. It is expected to be a major player at the Oscars this year and another top notch addition to Spielberg’s sterling filmography. Not bad for just seven months of work.

“Those are the kinds of movies that as I’ve grown a little more experienced, I really, really love making. I love telling stories like this.” 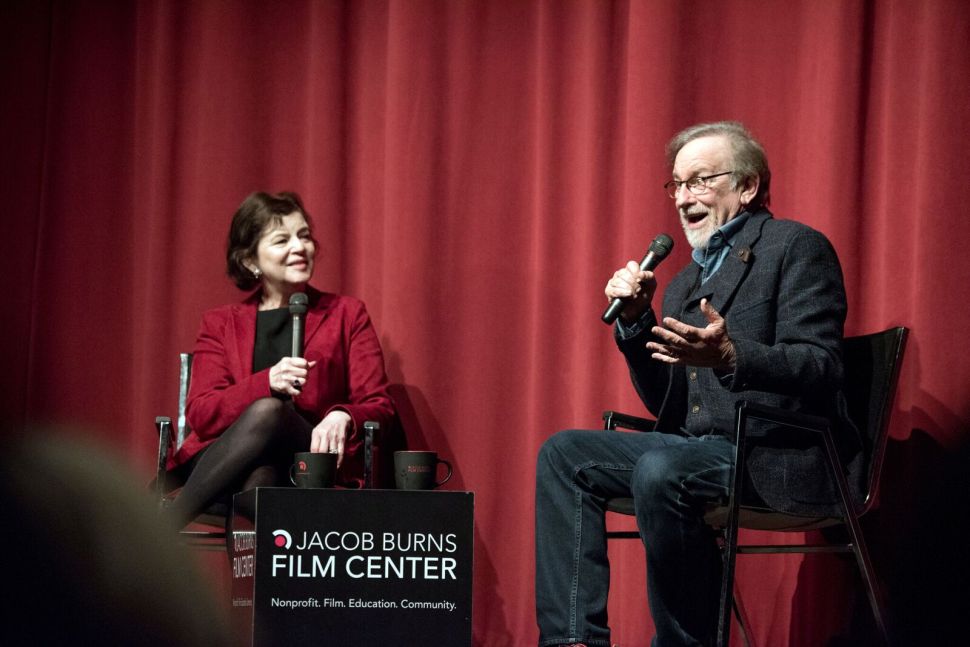