The annual Sundance Film Festival is set to begin on Thursday, January 18, and as such, the film industry is bundling up and heading to Park City. Of course, it’s not just those involved in the actual production of movies that make their way to Utah for the yearly gathering—plenty of socialites and influencers that have nothing to do with the film industry flock to the slopes until Sundance ends on January 28, enjoying all that the snowy climate and après-ski has to offer.

Sundance is the biggest independent film festival in the United States, so the massive crowds that gather in the wintry destination are expected. But considering the sheer number of people that will be making their way to Park City, it’s best to ensure you have your luxe accommodations taken care of, well in advance.

Below, see our top five choices for where to stay during the Sundance Film Festival this year.

The Waldorf Astoria Park City is just as glamorous as the rest of the hotel’s renowned properties around the world, but this one happens to be the largest ski and golf resort in the United States. The 160-room hotel opened in August 2009 and offers year-round access to Canyons Village base via the Frostwood Gondola, plus access to 7,300 acres of terrain and over 300 trails.

All of the luxe rooms are fitted with custom furniture and décor, and equipped with a fireplace, while many have private patios and balconies. It’s also where you’ll find the award-winning, 16,000-square-foot Waldorf Astoria Spa, which contains 15 treatment rooms for personalized experiences. Other amenities at the hotel include a year-round outdoor heated pool, ski valet and a fitness center, just in case your day at the slopes wasn’t quite enough exercise.

As the name implies, the limestone Washington School House hotel was, indeed, built as a school in 1889. It received a total gut renovation and reopened as an exclusive, boutique hotel in December 2011, with just 12 rooms and suites. The rooms feature 16-foot ceilings as well as reclaimed oak barn wood floors, quarried quartzite and marble, with furnishings including European antiques and sparkling chandeliers. There’s a heated pool and spa on the grounds, as well as an outdoor fire and a ski lounge, where you can feast on the perfect après-ski snacks.

The Stein Eriksen Lodge was voted the World’s Best Ski Hotel by the World Ski Awards, and it does not disappoint. The European-style resort is composed of 180 rooms and suites, some of which have fireplaces in the living rooms and private decks with hot tubs. Wine connoisseurs may be particularly inclined towards this resort—Stein Eriksen Lodge’s 10,000-bottle wine collection is valued at over $1 million.

The St. Regis Deer Valley is located at the base of the Wasatch Mountains. The hotel is comprised of 109 guest rooms as well as 65 suites, all with picturesque mountain views. The hotel is known for its signature amenities, like nightly champagne sabering demonstrations, a hot chocolate bar and s’mores by the terrace. Aside from ski valet service and ski-in, ski-out access, there is also a split-level infinity pool with adjacent hot tubs. Plus, the multi-level, 14,000-square-foot Remède Spa offers 11 treatment rooms, in addition to two spa suites with outdoor patios.

The entire Montage Deer Valley has incredible views overlooking Park City. The 220 rooms and suites all have fireplaces and sitting areas, walk-in closets, deep soaking tubs as well as private outdoor space. There’s also no need to ever actually leave the cozy confines of the hotel—it houses five separate restaurants, a lounge and even a bowling alley. 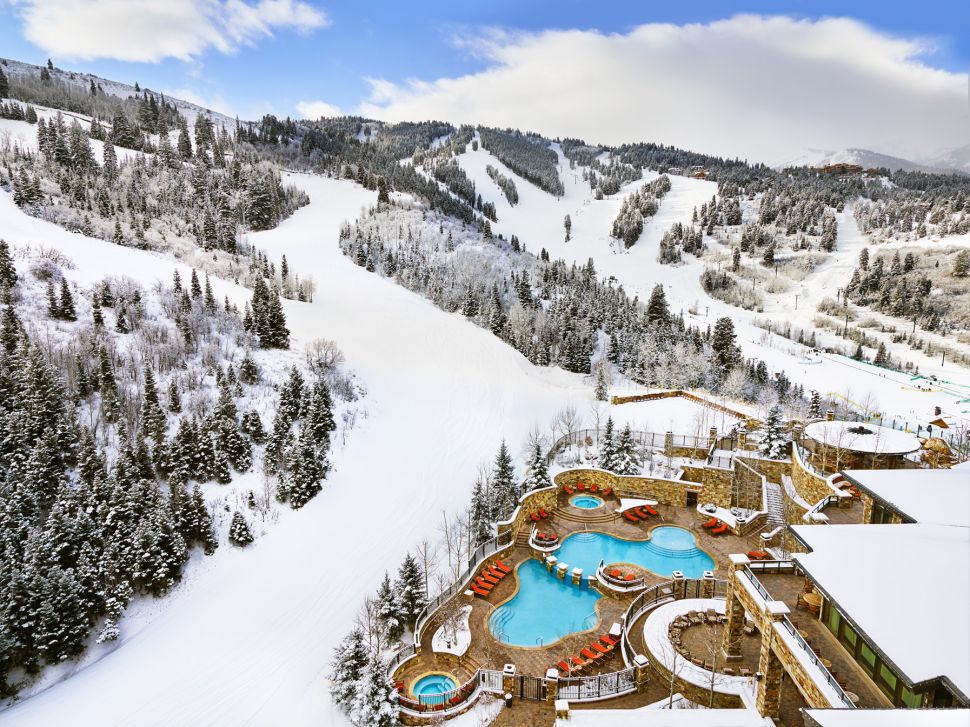