The one-month countdown to the 2018 Winter Olympics has officially begun, as the PyeongChang games will kick off in South Korea on February 9. And that means just one thing: it’s time to review the uniforms that will be worn by the athletes repping the USA when they make a grand entrance at the opening ceremony, hit the slopes and collect their medals on the podium. From waterproof Nike jackets with hidden pockets for cellphones, to some chic Ralph Lauren getups, here’s what your favorite athletes will be wearing—and how you can buy their exact looks.

Team USA will be making their Olympic debut at the Opening Ceremony in head-to-toe Polo Ralph Lauren designs. The looks, which were revealed on the Today Show this past November, include a white puffer jacket, some cozy fleece track pants and a retro red, white and blue ski sweater. The requisite accessories worn by Team USA include wool gloves and a hat, plus a bandana splashed with the American flag. However, the pièce de résistance of these outfits will be the brown suede boots with red laces. Indeed, it will appear as if the Olympic athletes stepped right out of a Ralph Lauren catalog and into the Parade of Nations. You can replicate the entire look, when the range drops later in January 2018.

Seeing as the medal ceremonies for all sports—save for hockey—will take place outdoors, Nike has plans to keep the athletes warm and cozy in their fully-insulated outfits. The Team USA Hypershield Summit Jacket will keep the team dry, thanks to the waterproof GORE-TEX exterior, and warm, with a little help from the built-in knit hand warmers (to be worn when the Nike gloves are not), in addition to the navy blue removable bomber jacket layer. These white jackets are equipped with an inner phone pocket, ideal for taking the requisite “biting my gold medal” selfie on the podium. The coordinating Nike pants are similarly equipped to keep rain and snow out, and the Gaiter Boots are designed to keep toes and ankles feeling toasty, thanks to a lace-free design and heat reflective materials.

Should you want to rock this gear for the next Bomb Cyclone, you’re in luck; the entire range will be available in stores and online on January 15.

The freestyle ski team repping America will be rocking looks from Columbia, the brand that has also been tapped to create jackets for ski teams from Canada, Belarus, Kazakhstan, Brazil and Ukraine. For their seventh season working with the U.S. ski team, Columbia decided to give athletes a touch of good luck by lining the jackets in a gold hue along with an awe-inspiring graphic that reads: “Climb to glory.” The exterior of the ski uniform is finished with OutDry Extreme, which offers maximum waterproof tech, while the interior was created with a material that mimics space blankets, providing lightweight warmth and very little bulk. Further, the ski pants and certain panels on the jacket feature a pattern that works like snow camouflage, which is intended to “mask the body movement” of mogul skiers.

“It’s a unique opportunity to work closely with a brand and see your input come to fruition,” said Troy Murphy, a member of the U.S. Ski Team. “We spend countless hours on the mountain in a wide variety of conditions. It’s awesome that we can give our feedback to Columbia and have them hand us a uniform the next season that reflects our input.” While Columbia won’t be stocking these designs in stores, customers can scoop up these similar jackets, which also boast the OutDry Extreme technology. 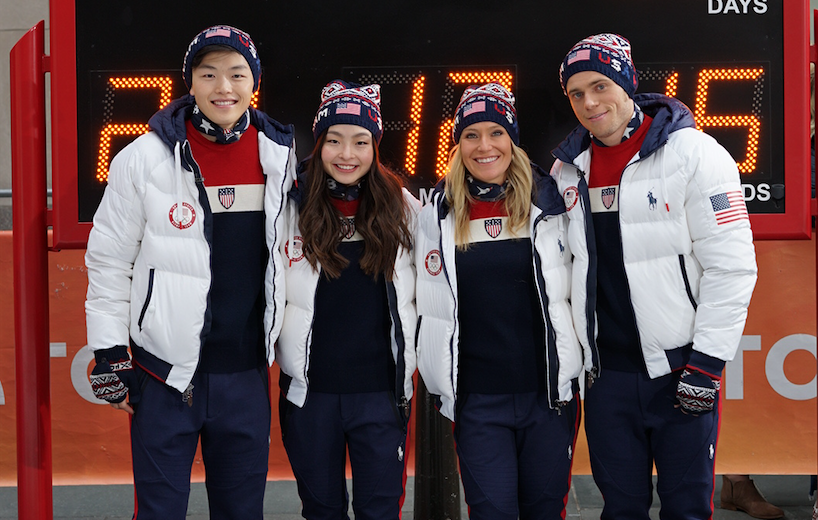