It’s warm—too warm to be sitting in direct sunlight—but this is a rare opportunity, so enjoy it while you can.

You’re surrounded by friends, enveloped by the chatter and comforted by everyone enjoying themselves. The beer garden is busy, people milling around with drinks in their hands.

Everyone seems happy to get a little drunk, keen to make the most of the unexpected but welcome sunshine. You look around and realize you’re the only one in your group without a drink.

This realization gives way to another. You feel on the edge of this haze of happiness. You’re not excluded per se, but you feel like you’re not quite part of the gang. You’re among good friends, people you’ve known for a long time, comfortable and at ease, but not drinking somehow puts you on the fringe.

It’s not anything anyone has said or done (not yet anyway). Neither is it intentional; sobriety wasn’t forced upon you. It was your choice and you own it.

Nonetheless, you feel like things would be different if you were drinking.

Finding yourself out of the conversation, you take the chance to go the bar. Even though you’re not imbibing alcohol, you still want a drink in your hand. It feels more natural and makes your sobriety a little less obvious.

Walking back to the table, you think how it’s not always like this. Usually there are a few others not drinking, and you feel like they get your decision. Silent support from like-minded people can be comforting.

Today, however, you’re the only one, and as you approach the table you realize everyone is beginning to cross that line from funny to annoying. So you say to yourself that you’ll make your excuses and leave after this drink.

They’ll understand; you’re not having any alcohol anyway.

You squeeze into the only available space and settle in. The conversation has moved on, and you feel out of the loop. Is the group getting louder?

Suddenly someone turns to you and in what feels like a shout asks, “Why aren’t you drinking?” quickly followed by “Just have one drink, what difference will it make?”

You knew this was coming, but it still caught you off guard. You say something about it being a personal choice and wanting to see how you felt after cutting out alcohol.

In response, you get some bullshit you won’t bother repeating. Everyone is definitely in that annoying stage now, so you leave.

Walking back to the car (one perk of not drinking, you can drive) you realize you’re two weeks into sobriety and begin thinking about the health benefits.

Although having a couple of drinks after a long day can help you unwind and fall asleep quicker and deeper, it disrupts sleep cycles later in the night and results in poor sleep quality. You’re left feeling tired and sluggish instead of energized and refreshed.

Drinking alcohol before going to bed causes you to spend less time in the deep-sleep stage and more in REM sleep, which can leave you feeling tired in the morning no matter how long you slept.

Additionally, drinking alcohol before bed can also result in waking to go the bathroom during the night, further disturbing sleep and leaving you dehydrated.

For better sleep, try one or more of the following instead of alcohol:

Alcohol causes dehydration—just think of all those toilet trips you make once you’ve started drinking. But alcohol also hinders the production of a hormone called vasopressin, which is responsible for helping you reabsorb .

This means alcohol not only results in getting rid of fluids at a faster rate than normal due to its diuretic properties, but it limits the ability to rehydrate by hindering the production of vasopressin.

The result of this dehydration? Skin will not look as fresh or plump as normal the next morning.

Alcohol also decreases the amount of vitamin A (a powerful antioxidant) in your body and acts a vasodilator, which means it opens body vessels and increases blood flow. That’s why people get red and hot in the face after drinking a few too many.

This overdilation of blood vessels can result in bursting and may even leave spider veins on the face. This is also what causes a puffy complexion after a night of drinking.

On top of this, consuming drinks with lots of sugar and/or salt can lead to inflammation of the skin, acne, sallow skin, bloating and more pronounced bags under the eyes. Alcohol is also considered a prime culprit of rosacea flare-ups, a skin condition that results in a red and blotchy face.

By not drinking and stay hydrated, you avoid these negative side effects and can begin to undo some of the damage caused by alcohol. If you’re a social drinker or even if you find yourself on the occasional binge, cutting out alcohol entirely will soon allow your complexion to improve, and your skin to look healthier.

Alcohol has a number of effects on the body, but perhaps one of the most severe is the damage it does to the liver. The liver plays a role in a variety of integral functions in the body, including the breakdown of food into energy, getting rid of waste products and fighting infections.

Drinking alcohol can increase the risk of liver disease and over time can cause irreparable damage to this organ. The liver is primarily responsible for metabolizing alcohol. When you drink too much, your liver cannot process it all, and it ends up circulating in your bloodstream, which is what causes intoxication.

Drinking more than three or four units a day for a period of as little as one or two weeks can result in developing ‘fatty liver,’ often the first stage in developing liver disease.

However, the good news is this can be reversed by not drinking for a couple of weeks, giving the liver a chance to break down the fat. Better yet, by moderating your alcohol intake and having several days a week where you do not drink at all, you can avoid this happening altogether.

When considering the thermic effect of food, alcohol’s calories drop to around 5.5 calories per gram, but this doesn’t negate that alcohol is of little value to the human body.

In fact, because alcohol is a toxin, it inhibits the breakdown of other food items until it’s been metabolized and cleared from your system, about an hour per unit of alcohol.

Any macronutrients consumed while metabolizing alcohol will likely be stored as fat instead of being used for energy. This can lead to weight gain and increased fat storage, particularly when coupled with the poor food choices that usually accompany drinking.

Research looking at the drinking and eating habits of students showed that “alcohol consumption affects the quantity and quality of food choices made.”

This was confirmed by a study conducted by “researchers at the National Institute on Alcohol Abuse and Alcoholism, National Cancer Institute and the U.S. Department of Agriculture.” They stated that, “People who drink more are also likely to eat less fruit and consume more calories from a combination of alcoholic beverages and foods high in unhealthy fats and added sugars.” The report went on to say, “As alcoholic beverage consumption increased, Healthy Eating Index scores decreased, an indication of poorer food choices.”

This ends up being a double whammy of negative effects when you’re drinking high-calorie selections such as cocktails, beers or lagers combined with high-calorie, high-fat foods such as pizza.

Alcohol is often associated with the mental benefits of relieving stress and unwinding. People flock to bars and pubs to grab a drink and let the troubles of the world slide away, even if just for a little while.

However, there is a flip side, as alcohol inhibits the ability to make decisions, often leading to undesirable and regrettable behavior. Whether this is in the form of overeating and straying from your diet, being aggressive and unruly or doing or saying something you know you shouldn’t to someone you shouldn’t.

The end result is feeling guilt and shame, even worrying because you can’t clearly remember what happened.

This phenomenon is known as a “moral hangover,” which accompanies the traditional hangover the next morning. In this state, you find yourself analyzing the events of the night before with your emotions swinging from discomfort to shame and remorse.

Instead of just feeling dehydrated with a serious headache and a dodgy stomach you also feel pangs of guilt, shame and regret over the night before, for a number of reasons:

In addition to the above health benefits, sobriety bring results in several material ways.

The cost of alcohol has steadily risen over the years, and one drink in any city the world over is likely to cost more than you really want to pay.

Bearing in mind it’s rarely ever just the one drink and factoring in buying “rounds,” a night out can severely hurt your bottom line.

By cutting out alcohol you’ll save more money on a weekly, monthly and yearly basis—money that can be used for those new clothes you want, that holiday you never took, or a meal in that fancy new restaurant around the corner.

No one wants to wake up with bloodshot eyes, dry mouth, a splitting headache and an acid-filled stomach, yet many people do that in the name of alcohol and having a good time.

By abstaining, you’ll avoid both the traditional and moral hangover and be better equipped to get on with your life by avoid any physical or mental health problems associated with excessive consumption.

Directly linked to the point above, you know that drinking alcohol results in late nights and painful hangovers, which leads to days in bed and wasted time.

By cutting out alcohol you’ll be able to get up and make the most of your day without suffering the debilitating effects of a brutal hangover or being insanely tired.

You’ll have more energy and enthusiasm, get more done and generally have more time to spare. This means being able to do more of the things you want and less time feeling sorry for yourself.

You’re feeling pretty good, and as you climb into bed you know you’ll sleep well and be able to get up early enough to make the most of tomorrow.

Weekends can be precious, and you’re glad you won’t waste any of it.

Feeling satisfied, you drift off into a deep and restful sleep, perfectly content in your decision not to drink and knowing that the next time some drunk person fires questions at you, you’ll be armed with a better response for why you’re not imbibing.

Theo is a Personal Trainer, Kickboxing Instructor and the founder of Lift Learn Grow, a fitness blog that shows you how to change your body without sacrificing your lifestyle. Say hi and learn more at www.liftlearngrow.com. 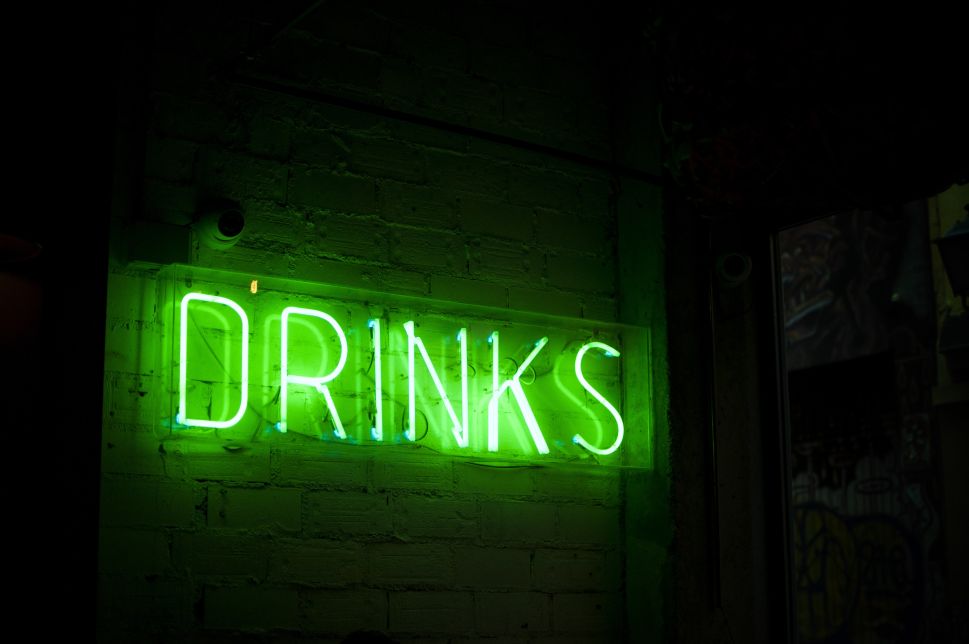