There’s nothing in the 14 words about smoking marijuana, which is today legal and even acceptable in some far-right circles. In December, the owner of an Oregon marijuana testing laboratory gave up her business after she and her partner were outed by antifa activists as unapologetic white supremacists—and they only did so because their clients abandoned them en masse. (“Nobody likes Nazis,” one of their former-coworkers explained.)

But if you’re alt-right, is it alright to get stoned while making memes and trolling libtards, as long as you still show up for work the next day all bright and fashy?

As editor-in-chief of white-nationalist mouthpiece The Daily Stormer and the leader of its attendant sewer-dwelling army of online Nazis, Andrew Anglin is in a position to know, or to at least have a “popular” opinion.

As Newsweek noted, Anglin is taking a hard pass on marijuana, after becoming convinced the “noxious” substance is part of a grand conspiracy cooked up by the people who serve as possibly his “favorite” nemesis, “the Jews.”

The subject of a recent Atlantic profile piece, Anglin is now living as a “stateless” semi-fugitive, when in reality he’s posting and reposting the Stormer, which keeps getting kicked off of its domains, from somewhere that appears to be within driving distance of his dad’s office, where he picks up checks.

So he was in a nearby time zone last Thursday, the day Sessions revoked the Cole Memo, a marijuana-friendly Justice Department policy directive dating from the Obama era.

While cannabis is now legal in Ohio and is “probably something we’re all going to have to deal with,” as Anglin lamented, this doesn’t mean he or anyone else in the tiki-torch mafia has to like it.

“Most of the marijuana industry, I can assure you, is run by Jews,” he wrote. Elaborating in a follow-up post Jan. 6, he floated some well-trod theories: general right-wing bogeyman George Soros, who also personally mails paychecks to antifa, is a secular Jew; there are Jewish people involved in the marijuana industry; there are marijuana companies in Israel. Obviously, he reasoned, this is some kind of Hebrew prank.

At least a few in the right-wing echo chamber agree but for wholly unprejudiced reasons.

“Pot is not a right-wing drug,” an Altright.com contributor offered. “Pot makes you into an introspective, effeminate, ‘open-minded,’ bug man… Of course there is no ‘right-wing drug’ because right-wing kind of implies you’re not doing drugs.”

There’s no doubt the drug war has served as a convenient tool for dog-whistling Republicans, including post-Nixon Southern strategy senators like Sessions. For that reason, it’s no surprise that Boomer-aged Nazis like David Duke are furious over legalization and giving voice to the anti-weed case.

But over on Gab, the more-Nazi and Roger Stone-friendly version of Twitter, there are more nuanced takes.

Some believe marijuana legalization is part of a conspiracy to take away firearms. (With 350 million weapons in the U.S., that would be an Illuminati-level plot.) Others believe weed is the least of the ills facing today’s society.

“Whatever your opinion of marijuana is, we didn’t elect Trump to wage war on it,” @JaredWyand posted. (That’s convenient, as Trump campaigned on the promise to respect states’ rights and leave weed alone.) “We still have a porous border with drugs flowing through it and all we have is 4 prototype sections in the sand. I can think of 50 other campaign promises that come before fighting a losing battle against pot.”

Indeed, cannabis could be the right’s undoing. “Well last time around all my stoner friends voted Trump, cuz they don’t like all the illegals here, but ya, they may vote democrat in the future, if the liberal candidate is saying LEGALIZE MARIJUANA NOW!!!!!” another user wrote.

Even Anglin appears to have arrived at his conclusion only after some time and consternation. “I’m torn on the issue,” he wrote in a 2015 post that advocated for decriminalization. “Every time I come out against marijuana legalization I get a bunch of crap in the comments section,” Anglin complained a year later, still clearly struggling. “Is it part of the Jewish agenda or not?”

If it is, it’s winning handily. Every poll commissioned shows steadily growing support for cannabis legalization among all segments of the population. Legalization, of course, is a cause with deep roots in the social justice movement, which would mean a weed-smoking Nazi is a self-owning Nazi—of which there are at least a few on the alt-right, as the Oregon episode suggests.

Chris Roberts is a writer based in San Francisco. Twitter: @cbloggy 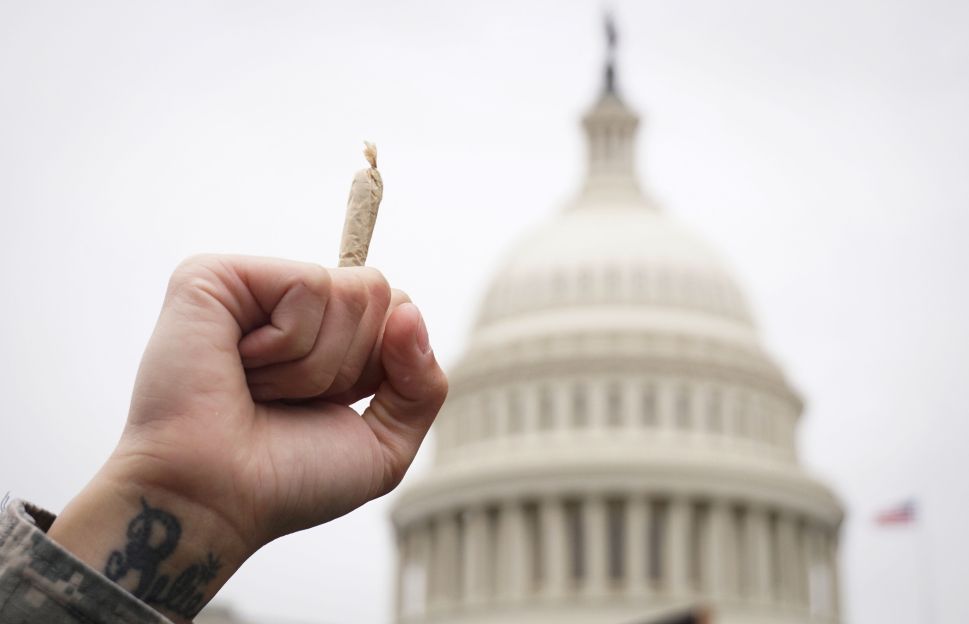