Recently, National Geographic and Doc Gallup teamed up to compile a list of the 25 happiest cities in the United States, based on the Gallup-Sharecare Well Being Index. The index compiles factors like civic engagement, walkability, healthful food options and access to the outdoors, to determine which cities boast the happiest residents across the USA. Read up on Observer’s top picks and recommendations for a healthful, reenergizing stay.

Sitting in the foothills of the Rocky Mountains, Boulder is a repeat champion for being one of the happiest and healthiest destinations in the country. Located just 25 miles from the hustle of Denver, Boulder provides a more relaxed, low-key alternative to busy city life, where you’ll feel encouraged to unplug and immerse yourself in nature by the city’s many bike paths, ski resorts and hiking spots. Staying active is practically in the DNA of its residents and the city itself, where bike paths and pedestrian walkways dominate the downtown area.

Where to Stay: The St. Julien Hotel & Spa

Recently, Condé Nast Traveler named the St. Julien one of the top 25 hotels on the West coast. You’ll get the best of both worlds with breathtaking mountain views as you sip your morning coffee, all while situated in the heart of downtown Boulder. The hotel has an exclusive partnership with local ski resort Eldora Mountain, turning Boulder’s best kept secret into a Forbes Four-Star luxury experience. After you hit the slopes, the spa offers an indulgent five-hour Day of Decadence” package that includes a full-body Swedish massage, a facial, a manicure-pedicure and complimentary champagne, that will have you smiling among the happiest of Boulder residents.

@elliothawkey here again for day two of my stay. We spent most of the evening walking through downtown and had lunch on the Sterns Wharf pier… but the highlight of the day was most definitely our flight with @nancohelicopters for sunset! Such a great way to see the city, coast, and the mountains. #americanriviera

The Mediterranean climate, mountain views and picturesque beaches of Santa Barbara make this town—situated just 100 miles south of Los Angeles—feel just like a luxury resort on the Italian coastline. Santa-Barbara locals made the list of the happiest people in America due to the city’s pristine surf conditions, walkable roads, bike paths that stretch across the coastline—in addition to 175 local wineries to choose from.

Where to Stay: The Four Seasons Biltmore

Picture perfect view of #ButterflyBeach to complete our annual Thanksgiving dinner. From the #FSSantaBarbara family to yours, Happy Thanksgiving!

The Four Seasons Biltmore occupies 20 acres of land nestled between Butterfly Beach and the Santa Ynez Mountains, a breathtaking property where you can take in the Spanish-Mediterranean architecture and the best Sunday brunch in the city, without even leaving the property. Enjoy Santa Barbara’s most scenic beaches, special privileges at top oceanside golf courses, waterfront dining, whale watching and wine tastings, all within walking distance of the hotel. The resort’s beach club also offers surf lessons, yoga and meditation classes, paddle boarding and access to the hotel’s beach cruisers.

This is arguably the wildest destination you can visit without a passport. Go ahead and turn your phone off, because you’re probably not going to get out service here anyways; let Anchorage take you off the beaten path, with five nearby national parks to hike and explore. You’ll have more time to venture through the state’s enormous mountain ranges and glaciers, thanks to longer daylight hours in the summer, though the skiing can’t be beat during the winter months.

Where to Stay: Alyeska Resort

Lily pad pond by spring, ice skating rink by winter. The pond at The Hotel Alyeska will be open for ice skating tomorrow! ⛸ ⛸ #iceskating #skates #icerink

The Alyeska Resort is located in Girdwood, a town just outside of Anchorage that lives up to its nickname of “the Palm Springs of Anchorage.” Alyeska is one of the only luxury resorts in the state, successfully reshaping Alaska’s rugged terrain into a luxurious experience, without losing touch with the surrounding wilderness. The pièce de résistance of the postmodern luxury resort is the gondola that extends from the hotel to the peak of Alyeska 2,500-foot-high private ski mountain. Take it to the top, and dine at the Seven Glaciers restaurant among the clouds, an award-winning fine dining spot and recipient of the 2017 Wine Spectator Best of Award of Excellence. 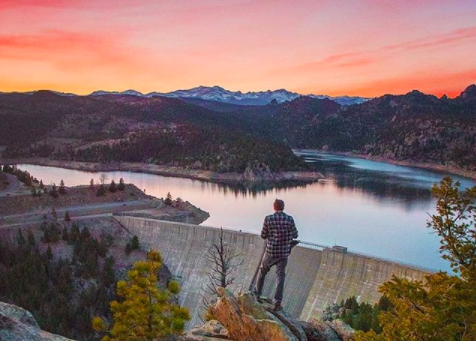