But do those shared story elements lend themselves to similar success at this year’s Academy Awards? In 2015, Spotlight took home two Oscars, including Best Picture, and was nominated for four more. Dating back to 1976’s All the President’s Men, the Academy has long held a fondness for the fourth estate. To determine if The Post is positioned for an equally successful awards run, we need to breakdown each film’s individual merit, competition and awards buzz heading into the ceremony.

The Post unfurls like a newspaper story: you read the headline, turn the page, scan the margins and dig in. It interweaves character drama with bigger themes related to freedom of the press so that it feels both intimately human and historic all at once. The timeliness of its subject matter also serves as an audience wake up call in an era of “fake news” and repeated attacks on the media. Its period setting does not distract at all from its contemporary parallels.

Spotlight manages to eloquently delve into one of the most disturbing scandals in recent memory without downplaying the treachery of its perpetrators or marginalizing the pain of its victims. The step-by-step journalistic process is methodically played out without ever being too bogged down in mundane details. Most importantly, however, McCarthy’s film never tries to paint its leads as crusading heroes, instead choosing to point out their flaws and biggest personal regrets. It’s a narrative move that makes the entire film all the more impactful upon repeat viewings.

Spotlight is a more emotionally raw movie with arguably more fiery characterizations from stars Michael Keaton, Mark Ruffalo, Rachel McAdams and Liev Schreiber. But The Post is likely a more enjoyable viewing experience thanks to the unexpected current of humor running throughout and the equally impressive performances from Meryl Streep and Tom Hanks. Both are deserving of their respective contender statuses, but we lean towards Spotlight as the better overall movie.

Here’s where things get dicey as 2017 was a noticeably weaker year for movies overall despite a handful of high-quality films. With the Best Picture race allowing for up to 10 entries, we expect the following to garner nominations: Lady Bird, The Shape of , Call Me By Your Name, Dunkirk, Three Billboards Outside Ebbing, Missouri, The Florida Project, Get Out, The Big Sick and I, Tonya. That leaves one spot for The Post.

In 2015, Spotlight beat out the following to take home the top prize: The Big Short, Bridge of Spies, Brooklyn, Mad Max: Fury Road, The Martian, The Revenant and Room. That’s two less candidates, but an overall stronger run of competition.

The prestige players involved with The Post will certainly help 20th Century Fox’s political jockeying behind the scenes in their Oscars campaign, but critics seem more taken with the whimsical The Shape of and the delightful Lady Bird. Even the technical mastery of Dunkirk seems to have drummed up more excitement this summer than the well-respected but hardly over-the-moon reception of The Post. Spielberg’s movie is fighting more of an uphill battle.

The Golden Globes are voted on by the Hollywood Foreign Press Association, which is an entirely different voting block than the Academy. But the second most-watched annual awards show still gives us some slight inkling of which way the wind is blowing ahead of the Oscars.

Spotlight scored three Globes nominations—Best Motion Picture (Drama), Best Director and Best Screenplay—losing all three. The Post nabbed six nominations—including Best Motion Picture (Drama), Best Director and Best Screenplay—also running the table in the loss category. But a general rule of thumb suggests that you can’t be a major player for Best Picture at the Oscars without nabbing a Director nomination as well (sorry, Ben Affleck). So it’s safe to say that The Post will be in the hunt. Both movies took home AFI’s Movie of the Year award and Top Film honors at the National Board of Review.

The 90th Academy Awards will be held on March 4. 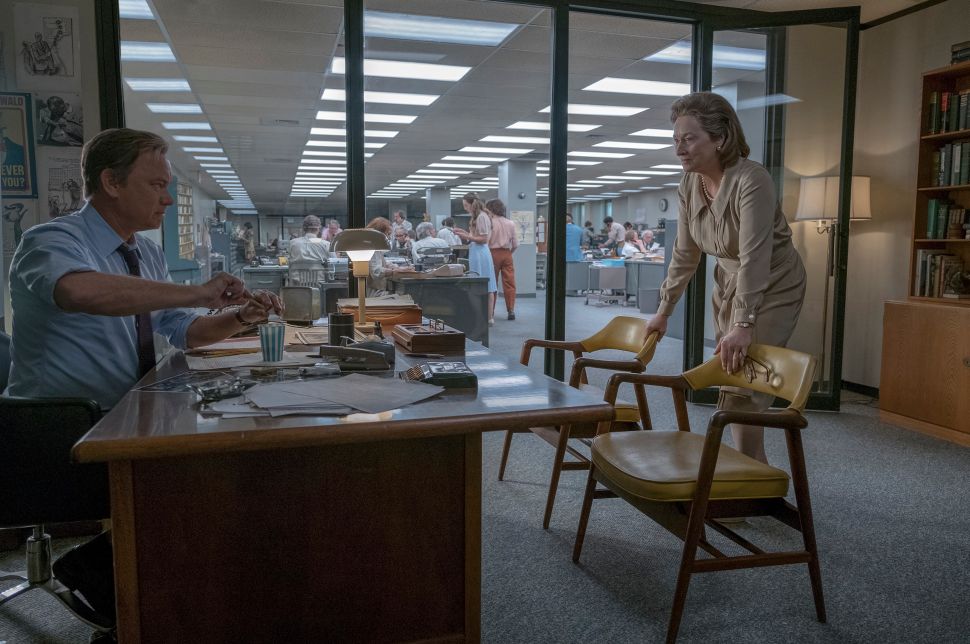