At a recent screening of The Post, director Steven Spielberg explained why he rushed to complete the film this year.

“Some would have us believe that there is no difference between beliefs and facts. We wanted to make a story where basically facts are the foundation of all truth, and we wanted to tell the truth,” he said.

While he didn’t name names, it doesn’t take much investigative journalism to realize that Spielberg is referencing Donald Trump (the director called him out directly in previous comments). It’s a sentiment shared by The Post screenwriters, who used the relevancy of the Pentagon Papers scandal to connect to today’s political and media landscape.

“I certainly felt compelled because the press is under siege, and it felt like an important time to remind the country why we need such a vital and strong press,” co-writer Josh Singer told Observer at the National Board of Review Annual Gala Tuesday night.

In today’s era of “fake news,” The Post has resonated with audiences in a way that few films of 2017 have. As such, you may be surprised to learn that Singer was brought on board to touch up the script, which was originally written by first-time scribe Liz Hannah. With a slew of Academy Awards nominations likely on the horizon, The Post is one hell of a way to kick off a career.

“It’s kind of crazy because I spent five years before this happened doing what most writers do, which is struggling and really trying to get your work out there,” Hannah told us. “I not only lucked out with Steven and Tom [Hanks] and Meryl [Streep], but when Amy [Pascal] read the script, she saw the same thing that we all saw. That was a story about a woman finding her voice, and oddly, I got to find my voice and become re-inspired about our work and what we hope to do.”

The Post is also a close parallel of today, as it follows Streep’s Katherine Graham, who must find her inner-strength when she unexpectedly ends up in a position of power. With Hollywood continuing to fail women and the greater world of business following suit, the film serves as a reminder of the great things that can result from equal opportunity.

“One of the things I loved when I read Liz’s scripts is that she had made this such a personal journey for Kay, and it really is such a wonderful portrait of a fantastic leader and I think a real role model,” Singer said. “Unfortunately, we still have only five or six percent of our Fortune 500 CEOs are women, and I don’t know why that is. I think Kay was a fantastic leader, and hopefully we’ll have more just like her.”

Those who lived through The Washington Post‘s struggle against government opposition in the 1970s will want to relive the historic happenings through The Post. But millennials who have no personal connection to the story can still find it enjoyable and entertaining as well. Though the weighty material may seem daunting, The Post is buoyed by an undercurrent of humor throughout.

“A lot of it, I think, is Steven. If you look at a lot of Steven’s films, they have a playfulness and a humor to them,” Hannah explained. “I think what’s important is when you’re making a movie, particularly this one which can be about some heavy stuff, you have to remind people that in real life, in the darkest times, we have to laugh. So I think in order to get people to cry, you gotta get them to laugh.” 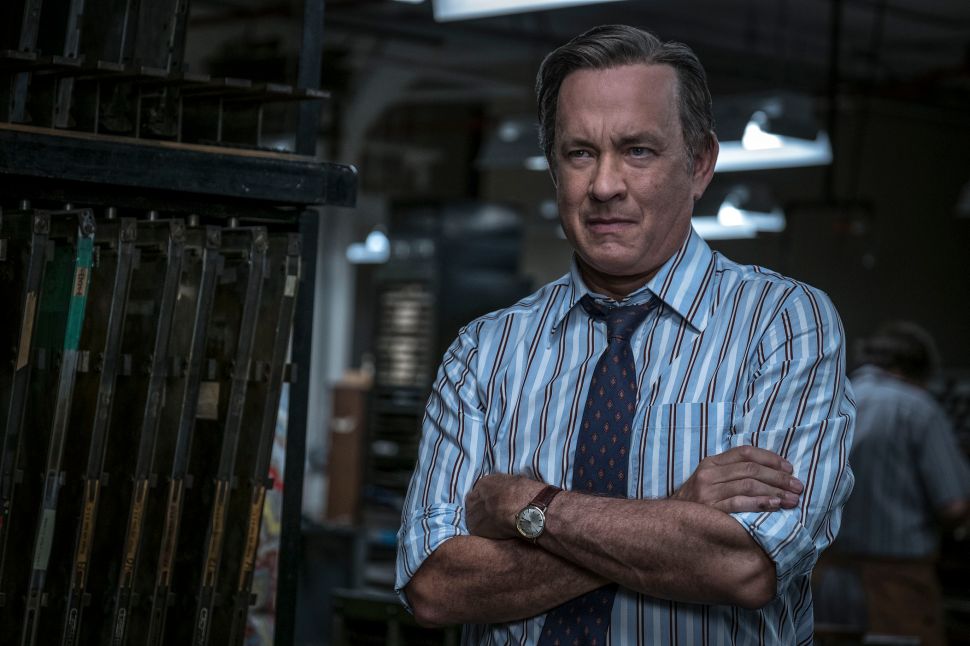