Every play worth the price of a ticket, whether it’s in a Broadway temple or a summer barn in Maine, has the same obligation: to tell a story that sends the audience home feeling something. This is a fact most of today’s playwrights choose to forget or ignore, and a tradition the resourceful, versatile and charismatic John Lithgow celebrates in a pleasant new Broadway production called Stories By Heart at the American Airlines Theatre. It’s an evening of erudition, magic and joy.

It is not a reading, but a one-man display of the values Lithgow grew up with, imbedded in the hearts of he and his three siblings as relayed by his father, Arthur Lithgow. A shy and restless actor, teacher, director and Shakespeare historian who produced and staged every single play the Bard ever wrote in a succession of festivals throughout the midwest, Arthur Lithgow lived on his passion for the stage instead of money, and died poor but happy, passing on his love for reading stories aloud at bedtime to his son John, who became an actor of very high rank indeed.

In Stories By Heart, Mr. Lithgow dredges up touching memories of his father and tells two of his childhood favorites that have been collected, along with 98 others, in a worn but priceless 1939 book 1500 pages long called “Tellers of Tales.” The book is a family heirloom and you can see and feel his father’s fingerprints on the broken spine. The set on which he tells them, illustrating every description with warmth and affection, is by the estimable John Lee Beatty and consists of one wingback chair and a couple of small tables on an otherwise empty stage. The staging by Daniel Sullivan is minimal, but it moves Lithgow in and out of superbly lit spaces that illuminate the spirit of the star’s imagination and accent the moods of his interpretative skills. The rest is up to the man who dominates the proceedings for two astonishing hours, leaving his spectators spellbound.

The evening is, then, an adaptation by Lithgow of two stories, one-act each, separated by an intermission that does not break the mood of the first half, but prepares you eagerly for the second one. First comes Ring Lardner’s 1925 short story Haircut, a tale of small-town betrayal and revenge related by the town barber as he goes through every lurid highlight while shaving a customer in a barber chair, gossiping about the various friends and neighbors in a scandal of adultery and murder. There is humor, too as Lithgow provides every sound effect, from the slap of the razor on the strop to the click of the scissors and brushes on the sideburns and chin. Lithgow has provided sound effects for animated films, and his experience shows.

Act Two, devoted to a jolly good change of pace by P. G. Wodehouse’s silly flood of eccentric words in his story Uncle Fred Flits By, is prefaced by Lithgow’s personal reminiscences of his father’s difficulty after surgery in 2002 when his reading Wodehouse aloud brightened the old man’s depression and lightened his mood until he died in 2004.

Talking about his parents’ fragility in their final years, his face melts into a mask of sadness and despair, then sparkles with wit as he tells in a stream of jabberwocky the loopy story of a fop named Pongo Twistleton, whose ordered city life turns to farce when he is visited in London by his curmudgeonly Uncle Fred from the country, culminating in a trip to the old man’s quaint childhood home, turned into an ugly housing development. It’s a capricious tale of total screwball lunacy that includes a rainstorm, a parlor of weird poseurs, a parrot, and a nerd called “the pink chap” who jellies eels.

At the risk of sounding eccentric myself, I must admit I found neither of the acts exactly what I would describe as mesmerizing. The joy of the production is not really the stories, but the passion and gusto with which Lithgow tells them. From a wicked barber to a lovesick girl to a ridiculous dowager putting on airs, the actor conveys pain, hilarity, and querulous inquisitiveness with mad abandon. One minute there’s a gleeful Ohio chuckle on his voice. A beat later, his mouth forms a bow and his fade folds down the middle in a collage of British pomposity. You spend so much time reveling in John Lithgow’s versatility that you forget the stories are, well…forgettable. And you marvel at the tsunami of words he managed to memorize, wondering how he masters the feat off making them sound fresh eight times a week.

Reviving the art of storytelling, he breathes new energy and life into a fading tradition on the stage. In John Lithgow: Stories By Heart he only tells two of them, but he leaves you wanting more. 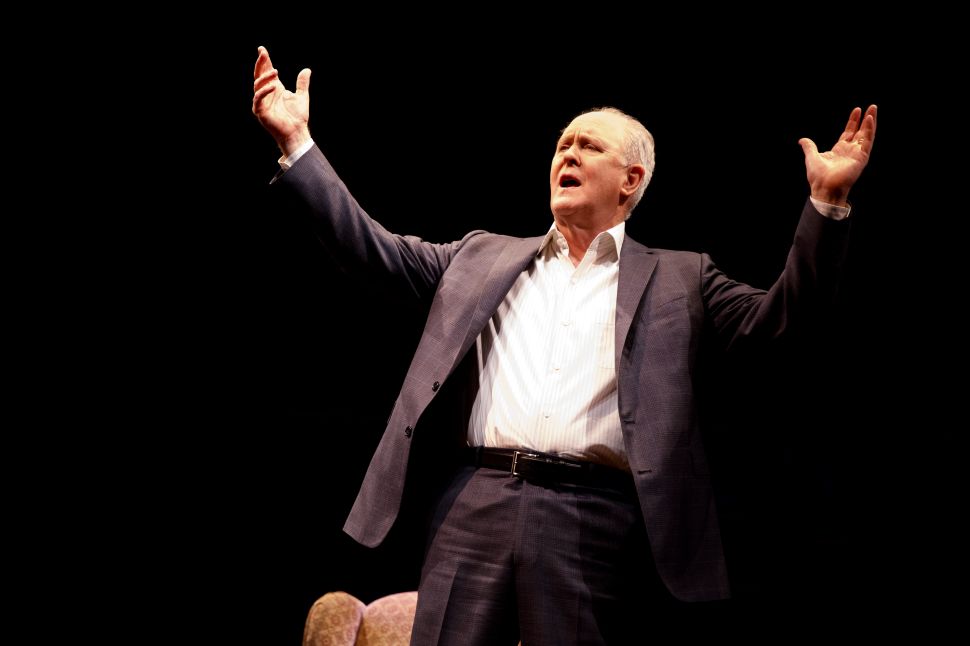