Senate Democrats are prepared to shutdown the government over the Deferred Action for Childhood Arrivals (DACA) program, an initiative that 87 percent of Americans believe should remain intact to protect the legal status of hundreds of thousands of immigrant “dreamers” living, working, and pursuing educations within the United States. President Donald Trump previously declared his support for the program, but the lack of action on Capitol Hill toward renewing DACA has caused dozens of Democratic senators to threaten to not pass a government funding bill, which would result in a government shutdown at midnight tonight.

This morning, Trump tweeted, “Government Funding Bill passed last night in the House of Representatives. Now Democrats are needed if it is to pass in the Senate—but they want illegal immigration and weak borders.”

Friday afternoon, Senate Minority Leader Chuck Schumer exited a meeting with Trump uncertain as to whether lawmakers will be able to agree on a spending bill before a potential shutdown, telling reporters outside the Capitol building, “We had a long and detailed meeting. We discussed all of the major outstanding issues. We made some progress, but we still have a good number of disagreements. The discussions will continue.”

“We certainly hope that they can work together and keep the government open,” White House counselor Kellyanne Conway told CNN’s Jeff Zeleny. “Our military deserves it, our government workers deserve it, our military spouses… and certainly those CHIP recipients. This is what leadership looks like. The president inviting people from both parties and from both chambers again and again to this White House to discuss the matters of the day with him.”

Dubbing it a “Schumer Shutdown,” White House Office of Management and Budget Director Mick Mulvaney confirmed to reporters that the GOP is indeed preparing for a shutdown. “I’m handicapping it now at some place between 50 and 60 percent, but again we’re planning for it as if it’s 100 percent,” he told reporters.

The House passed a short-term spending bill on Thursday evening to avoid the shutdown, but the bill’s fate remains uncertain in the Senate. Democratic lawmakers, if unappeased by Friday afternoon’s negotiations, will block the vote in hopes that Republicans will be willing to renegotiate the potential deportations of DACA immigrants, domestic spending, federal aid towards Puerto Rico, and the Trump administration’s plans to combat America’s opioid epidemic, among other issues. 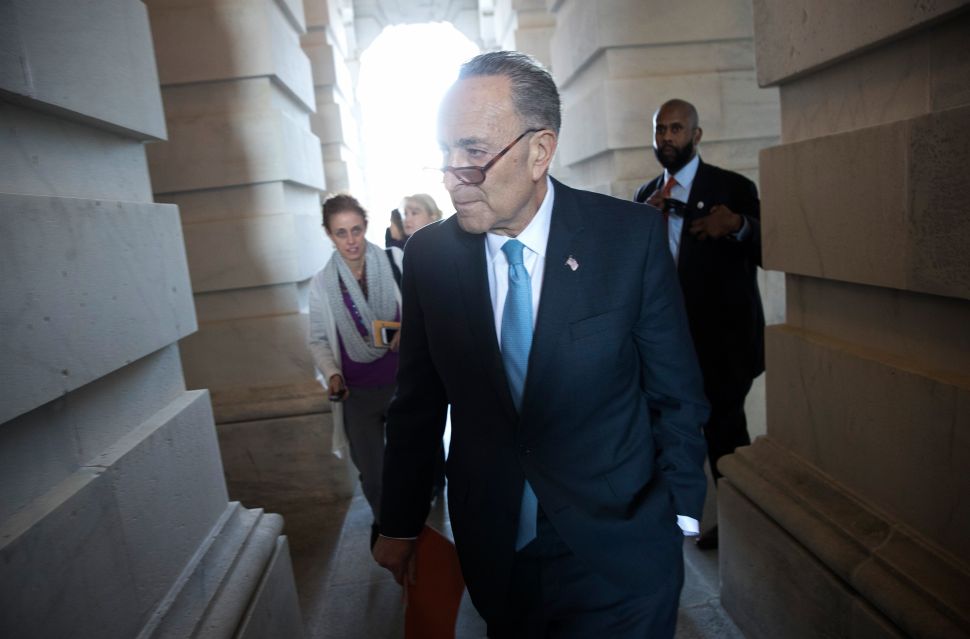