A chapter from Fire and Fury: Inside the Trump White House, reporter Michael Wolff’s forthcoming book about President Donald Trump’s White House, detonated a GOP firestorm on Wednesday. Published by New York Magazine, the excerpt alleges that Trump always intended to lose the 2016 presidential election, drawing heavily on interviews with former Trump advisor Steve Bannon. Bannon reportedly called a meeting at Trump tower between several Russians and the president’s son, Donald Trump Jr., “treasonous” and “unpatriotic.” Aides told The New York Times that Wolff was frequently spotted in Bannon’s office during the Breitbart chairman’s brief stint in the Trump administration, and that he only spoke to the president once, for 15 minutes.

Shortly after the story went live, Buzzfeed published an email exchange from 2016 where Bannon referred to the current president as a “narcissist” several months before leaving Breitbart to head the Trump campaign. Similar to how DNC interim chair Donna Brazile’s campaign memoir Hacks was a political kamikaze against Hillary Clinton and the Democratic Party, Wolff’s Fire and Fury: Inside the Trump White House turned palace intrigue into blockbuster spectacle, pitting Republicans against one another. From billionaires to neoconservatives to performance artists, here are the top exchanges between GOP operatives amid 2018’s first political explosion.

Trump refrained from speaking ill of Bannon following the aide’s ousting for allegedly leaking office politics to the press. Even after Bannon showboated on 60 Minutes, calling Trump’s decision to fire former FBI Director James Comey one of the worst blunders in “modern political history” and bemoaning the “globalist wing” of the White House, the president remained uncharacteristically silent. When Bannon’s preferred Alabama Senate candidate Roy Moore was bested by Democratic challenger Doug Jones, handing a 25-year Republican stronghold state to Democrats, Trump did not explicitly condemn the Breitbart chairman.

“Steve Bannon has nothing to do with me or my Presidency,” wrote Trump. “When he was fired, he not only lost his job, he lost his mind.”

“Steve pretends to be at war with the media, which he calls the opposition party, yet he spent his time at the White House leaking false information to the media to make himself seem far more important than he was. It is the only thing he does well.”

Donald Trump Jr., EVP of Development and Acquisitions at The Trump Organization

“Even if you thought that this was not treasonous, or unpatriotic, or bad shit, and I happen to think it’s all of that, you should have called the F.B.I. immediately,” said Bannon.

Trump Jr. responded on Twitter, saying that “[Breitbart founder] Andrew Breitbart would be ashamed of the division and lies Steve Bannon is spreading.” The son promoted several tweets from right-wing pundits while pointing to Breitbart’s comment section as an indicator that the populist movement sided with his father.

Wow, Just looked at the comments section on Breitbart. Wow. When Bannon has lost Breitbart, he’s left with . . . umm, nothing.

“Steve had the honor of working in the White House & serving the country,” wrote Trump Jr. on Wednesday afternoon. “Unfortunately, he squandered that privilege & turned that opportunity into a nightmare of backstabbing, harassing, leaking, lying & undermining the President. Steve is not a strategist, he is an opportunist.”

Former White House Communications Director Anthony Scaramucci was one of the first to publicly break from Bannon. In an expletive-laced interview with the New Yorker‘s Ryan Lizza published last summer, Scaramucci accused Bannon of building his brand off the “strength of the President.”

Following Wolff’s piece, Scaramucci reaffirmed his colorful statements over Twitter, earning him an endorsement from Donald Trump Jr. “Take out the expletives and pay closer attention,” the ex-communications director said on Wednesday.

We are a team. Teams stick together no matter what. https://t.co/20fmYFS0yb

Trump’s close friend and advisor Thomas Barrak Jr. was accused of calling the president “stupid” in the Fire and Fury excerpt. In a statement to the New York Times, Barrak Jr. called the account “totally false.”

“It’s clear to anyone who knows me that those aren’t my words and inconsistent with anything I’ve ever said,” said Trump’s confidant.

Although Bill Kristol was a strong supporter of George W. Bush’s invasion of Iraq, he has since emerged as one of president Trump’s fiercest critics.

Matt Drudge, Founder and Editor of the Drudge Report

Matt Drudge, the curator for the popular news aggregation site Drudge.com, called Bannon “a schizophrenic” over Twitter. He also referenced a Vanity Fair report that revealed how Bannon traveled with armed security.

Although Bannon distanced himself from former Breitbart editor Milo Yiannapoulos after an explosive Buzzfeed report from October, Yiannapoulos never publicly disparaged his old boss; in an interview with Observer, he called Bannon “a friend.”

“Expect to see Breitbart bigging up Pence in the months to come,” Yiannapoulos wrote over social media on Wednesday. “As I say, very sad. Two men I admire, one of whom I adore. I don’t feel the need to choose.” 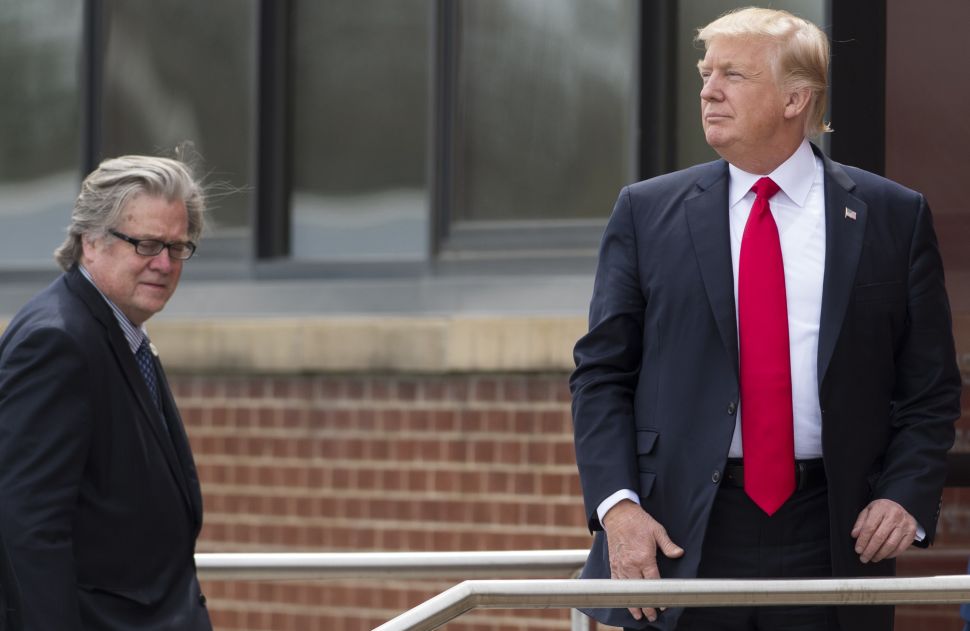