Last night, President Donald Trump bounded into the House chamber wearing an electric blue tie, his windblown mane meticulously sprayed into place. He doesn’t need the Constitution to tell him to address the people “from time to time.” He does it all day every day on Twitter.

He is the rare 71-year-old who gained his sense of the dramatic arc by hosting a reality show. A week earlier, with confession-cam candor, Trump called the Senate Minority leader “Cryin’ Chuck Schumer.” He was there to address him, Little Marco, Lyin’ Ted, Pocahontas and the rest.

This would not be the expected bipartisan speech about infrastructure. Trump instead treated the United States Capitol like a campaign rally at a hockey rink in Wheeling.

For years, there had been talk about expanding the Republican tent by picking off one or more of the identity groups that make up the Democratic Party. Different policies could attract gays or blacks or Hispanics, was the thought.

Trump has expanded the tent into Pennsylvania, Ohio, Michigan, West Virginia and Wisconsin. He has done it by rejecting identity politics and directing his appeal to ordinary Americans.

His speech called firefighters and coast guard rescuers and Corey the welder “heroic” and “beautiful” and “a great welder.” He scolded the politicians in the room: “These are the people we were elected to serve.”

In a city where every square patch of grass is named to honor a politician, he gives politicians demeaning names and honors ordinary citizens. That, right there, is the chewy Tootsie Pop center of Trumpism.

The speech was high on aspiration.

“We can achieve absolutely anything.” “We have ended the war on American energy, and we have ended the war on beautiful, clean coal.” “We are very proudly an exporter of energy to the world.” “We took away regulations that cripple our beautiful auto workers.” “We’re with you, we love you, and we will always pull through together.”

Ordinary Americans are high on aspiration, too. It is the coastal elites, the smarmy ESPN hosts, who are hip and ironic.

He cited every point with a face in the crowd, using the persuasive power of anecdote to its fullest. He politely asked them to stand then said thank you.

Their faces, too, were ordinary, some pained with loss that he attributed to erroneous policy. They were black and brown and white, two in uniform, one had crutches, there were a few visible tattoos, and an earnest kid who looked like the Fourth of July. “Preston Sharp reminds us why we stand for the National Anthem.” Take that, Super Bowl week.

There is a moment in any buddy cop movie where the by-the-book lieutenant six months from retirement starts to like the wild-eyed rogue he is teamed with to catch the serial killer. That appears to be happening with Trump and the Republicans. Paul Ryan sat behind the president with a look on his face like, yeah, okay, I’m starting to get it.

The president is polarizing, which can be a good thing for Republicans when it causes every Democrat in Congress to vote against tax reform just to spite him. Sometimes in politics it is best when battle lines are drawn. November will be a clear choice between those who rescued the economy and those who stood in the way.

It’s not just Paul Ryan who thinks so, either. Sen. Joe Manchin of West Virginia hesitated last week before submitting his petition to seek re-election in the fall. He angrily told Sen. Schumer, “This place sucks.”

He’s going to be traveling a lot of country roads in September and October trying to make a distinction between himself and those things that suck in his anti-Trump party. It will not help that everyone on his side of the aisle refused to applaud the lowest unemployment numbers in history.

The speech was bookended by the media’s tut-tutting. To them, Trump is always as marginalized and discredited as he was at 7:59 on the night the polls closed. That’s never going to change.

There was also the always comical rebuttal. For this they trotted out a Kennedy who bore the suffix “III.” Appropriately, it was filmed in a high school gymnasium, where for half a century student government types have tried to approximate the Kennedy-esque rising and falling chiasmus speaking style.

Sometimes the kids nail it, too. This Kennedy didn’t. It was an appeal to the working class using a Ford Mustang with the hood up as a prop. Because, don’t ya know, kids from rich families with houses on Cape Cod think American workers love to tinker with car engines in their free time.

The Democrats will likely come to regret their staging on this evening, in general. They looked petulant and angry in the latest Hollywood all-black fashion that is supposed to say #metoo, but on them seemed to say #lookatme. It did not work.

The take from this evening will be that it was a triumph for Trump. His speech was well-crafted and well-delivered. It did not pander to the room full of politicians and instead reached out and made a direct appeal to ordinary Americans.

Many Americans who watched the speech probably woke this morning with that same look Paul Ryan had on his face. Trump may be rogue and not by the book, but it’s starting to make sense. 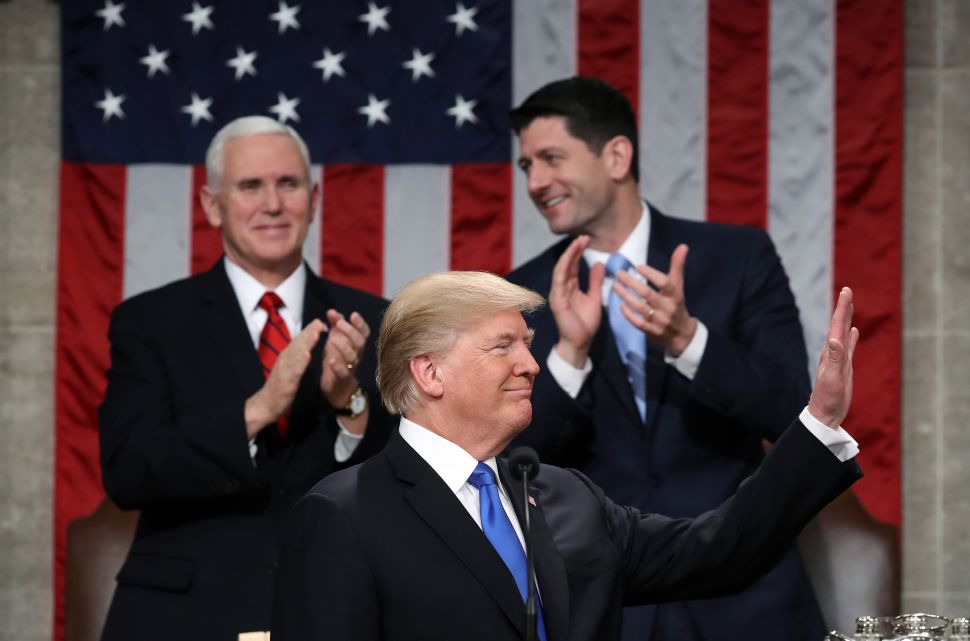