As Donald Trump approaches a year in the White House, one of his gifts that is too seldom acknowledged is his fine-honed ability to make days seem like weeks and weeks seem like months, even years. As president, he has managed to jam-pack so many bizarre, jaw-dropping antics into such short periods of time—any one of which would be scandalous for any normal White House—that they blur into each other inside the news cycle and soon melt into the morass of Trumpism.

However, for the sake of future historians trying to unravel the unprecedented disaster which is the Trump presidency, let’s review the past week’s Oval Office highlights (such as they were), many of which involve President Trump’s profligate use of Twitter. As is his wont, last Saturday morning the commander-in-chief started tweeting, and even for Trump this was a doozy.

The dark cloud hanging over the White House at the beginning of the new year is the book Fire and Fury by Michael Wolff, which paints a deeply unflattering portrait of the administration. Although Wolff insists his work is factually accurate, his track record suggests otherwise. Nevertheless, his account of an idiot president, hopelessly out of his depth to the point of mental instability, who never wanted the job, surrounded by equally incompetent underlings who spend most of their time leaking on each other and back-biting, rings true to anybody who’s been paying the slightest attention to Team Trump in action. Why the White House allowed a well-known literary rapscallion like Wolff to wander the West Wing for months, unsupervised, is the obvious question here—though, as usual with Trump, there’s no point in asking normal questions of a very abnormal presidency.

Trump’s absurd efforts to get Fire and Fury taken out of circulation instead sent book sales into the stratosphere, so the wounded president retreated to Twitter to make his case. Last Saturday he tweeted to the world that, contrary to Wolff’s account, he is entirely in his right mind and very smart. After tweeting, yet again, that the “Russia collusion” story is a “total hoax” conjured up by the Democrats and their “lapdogs” in the “Fake News Mainstream Media,” the president added: “throughout my life, my two greatest assets have been mental stability and being, like, really smart.” For good measure, Trump followed that with the statement that he is, in fact, “a very stable genius.”

This induced global guffaws, since highly intelligent people in their right mind seldom have any need to state so publicly, but “very stable genius” was the new White House line, and Team Trump went out to defend it on the Sunday morning talk shows. The ranks of sycophants willing to baldly lie for the president on live TV have thinned over the last 12 months, and it fell to White House adviser Stephen Miller to explain to America what a stable genius his boss actually is.

The unctuous Miller, a 32-year-old right-wing ideologue, went on CNN and it didn’t go well. His insistance to Jake Tapper that President Trump really is a very stable genius, and Trump’s only problem is media lies propagated by the likes of CNN, blew up in his face so badly that Tapper cut the interview short with the statement, “There’s one viewer that you care about right now and you’re being obsequious and you’re being a factotum in order to please him.”

As if to prove Tapper’s point, President Trump quickly went to Twitter, where he stated: “Jake Tapper of Fake News CNN just got destroyed in his interview with Stephen Miller of the Trump Administration. Watch the hatred and unfairness of this CNN flunky!” In the Trumpian parallel universe, which the president nurtures with his Twitter feed, this became the new-new talking points to be parroted, obvious facts to the contrary. For good measure, Trump tweeted that on January 17 he will bestow “The Fake News Awards, those going to the most corrupt & biased of the Mainstream Media,” and presumably Jake Tapper is a short-lister there.

Then, during the work-week, such as it is, Trump did some normal presidential things like photo-ops, signing executive orders, and meeting foreign dignitaries, but the president is functionally a part-time government employee. As depicted in Wolff’s devastating account, Trump spends his morning lounging around, watching Fox News and tweeting—this is charitably termed “executive time” in the West Wing—and gets down to work around 11 in the morning. Trump is often in bed by 6:30 in the evening, eating cheeseburgers while watching TV, Fox News predominating, naturally.

Mostly, the president tweeted a lot this week. About the glories of the stock market, about the still-not-built “wall” on our Southern border, and how awful and underhanded his opponents are. On Wednesday, frustrated by Republican lies and obstruction, Dianne Feinstein, one of the most powerful Democratic senators, released the transcript of the testimony of FusionGPS boss Glenn Simpson. In one stroke, Feinstein blew apart the totally fabricated Trumpian narrative that the infamous Steele dossier is a Democratic plot and the FBI is attempting a coup against the president. In a fury, Trump tweeted that “Sneaky Dianne Feinstein,” a “disgrace,” did something “underhanded” and “possibly illegal” by releasing the transcript—to no effect save to excite his dwindling base.

Things began to go seriously off the rails on Thursday morning, when President Trump tweeted about impending Congressional reauthorization of Section 702 of the Foreign Intelligence Surveillance Act, which permits the National Security Agency to collect metadata on foreign spies and terrorists. Renewing Section 702 is our Intelligence Community’s highest legislative priority this year, since FISA plays a pivotal role in many classified national security programs.

However, the commander-in-chief was watching Fox and Friends, his favorite show, and tweeted out what he found congenial. It’s best to think of Trump’s morning Twitter feed as Fox and Friends highlights, transcribed. Andrew Napolitano, the New Jersey judge-turned-Kremlin crank, was on the show, lambasting FISA 702 as a sinister “deep state” plot against our civil liberties, and the president took to Twitter to spread the word. “‘House votes on controversial FISA ACT today.’ This is the act that may have been used, with the help of the discredited and phony Dossier, to so badly surveil and abuse the Trump Campaign by the previous administration and others?” Trump tweeted, causing immediate uproar.

That one tweet included no less than four separate lies and fabrications, not to mention that President Trump doesn’t know the “A” in FISA stands for Act. More importantly, renewing FISA 702 was the White House’s own well-known position, which Trump blew up just before the vote on the Hill. In a panic, Congressional and Intelligence Community leaders went to the president and crafted a rebuttal of sorts, in a bizarre tweet that attempted to undo the damage. In the end, the House of Representatives renewed Section 702, but the needless drama laid bare that Trump pays no attention to his intelligence briefings, relying instead on Fox News, and has no idea what his own administration’s positions are, even on vital national security matters.

That was nothing compared to what happened later Thursday, when during a meeting with Congressional leaders, the president asked why America was taking immigrants from “shithole countries” like Haiti and Africa. With one statement—which was soon leaked to the media, since Trump, who has never grasped the concept of an “off-the-record conversation,” made the reference in mixed company—the president blew apart any chance at immigration reform, which is reputedly his signature issue. Outrage ensued, at home and abroad, and finally Trump had said something so offensive that even his political allies rapidly distanced themselves from the White House.

At first, Team Trump didn’t seek to walk away from the “shithole” comment, sensing that a good chunk of the president’s base might approve, but when it became obvious what an epically unforced error this was, the administration made efforts to deny the statement—without much effect. As usual, Donald Trump made the country’s political discussion all about him, his unpleasant views, and his inability to control himself in a manner most Americans expect of their children.

Americans can be forgiven for yearning wistfully for the days when presidential “scandals” focused on the wrong suit shade—which Donald Trump has made seem like many decades ago already. As expected, the president was on Twitter this morning, lambasting Democrats as “all talk and no action” for not wanting to deal with him on immigration after his “shithole” comment, while stating simply, “AMERICA FIRST!”

So it goes, and will keep going until some sense of normalcy returns to Washington, presuming that President Trump hasn’t shattered our country’s political norms permanently. Time will tell. It usually does. 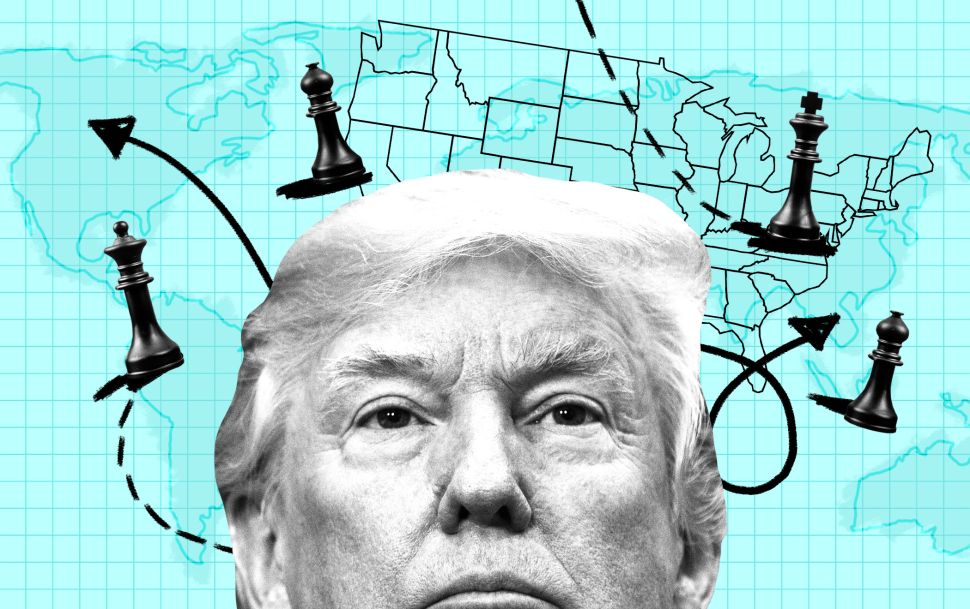