His victim was Bill Kristol, who now appears on MSNBC but used to work for Fox. In an interview with John Harwood on CNBC, Kristol recalled hiring Carlson as a cub distorter for The Weekly Standard.

“He was one of the most gifted… 24-year-olds I’ve seen in the 20 years I edited the magazine,” Kristol told Harwood. “He had always a little touch of Pat Buchananism… paleo-conservatism.”

But Kristol said Carlson has become something “very different” now that President Donald Trump has demanded an immigration crackdown and foreigner-bashing has become a meal ticket for right-wing politicians and hate-mongers in the media like Carlson.

“It is close now to racism, white—I mean, I don’t know if it’s racism exactly—but ethno-nationalism of some kind,” Kristol said. “A combination of dumbing down… and stirring people’s emotions in a very unhealthy way.”

Of Fox in general, Kristol said the right-wing propaganda factory has changed for the worse.

“Seventy-five percent of it seems to be birther-like coverage of different issues,” Kristol said. “So that’s been, I think bad.” Overall, Kristol said, Fox is showing “a gradual increasing of recklessness.” The “birther” movement, led by Trump, slandered President Barack Obama with a lie that he was born in Africa.

Carlson responded on Tucker Carlson Tonight Thursday by insulting Kristol as “a former intellectual who now exists primarily on Twitter.” Carlson insisted Kristol “discredited himself years ago, that’s why he no longer has a full-time job.”

As is often the case with Carlson, he provided no proof to back up his personal denigration of someone else. But he closed his show with a new justification for his recent attacks on Latin Americans. As he spoke, his screen showed two brown-skinned men scaling a wall.

“When the concerns of foreigners takes precedence over the needs of Americans, our government is betraying us and has become illegitimate,” Carlson said. “Of course, that’s exactly what’s been happening.”

Aside from his crackpot claim that our government is now illegitimate, the faux intellectual based his statement on a false premise: that concerns of “foreigners” have taken precedence over the “needs” of Americans.

The previous day, Carlson ranted against “sanctuary cities” that won’t help ICE agents break up families by deporting residents who have lived in the United States for many years without committing crimes. His “guest” was David Campos, a deputy county executive in Santa Clara County in California.

In this tiresome Punch and Judy act, Carlson again used a “guest” as a straw man, someone to interrupt and talk over. On Fox, especially on this show, the debate is always won by the host who out-shouts the guest.

“Answer this!” Carlson demanded. “Is it consistent with readings of the Constitution ratified by the Supreme Court that a state would actively work to undermine federal law? I’ll answer it for you! NO! Actually, NO!”

When Campos tried to say things like, “Stop demonizing any one group,” Carlson smirked, interrupted, talked over him again and sneered in a supercilious way: “Right. OK. I get it. I get it. And, you know what? I can do with a little less moralizing.”

Carlson acts most hysterical lately about DACA, Delayed Action for Childhood Arrivals. At least 800,000 of these Dreamers were brought as kids from other nations and face deportation by Trump if Congress cannot pass changes in immigration laws. Most want a path to citizenship or, as Carlson calls it, “amnesty.”

To decorate his show Wednesday, Carlson’s producers showed headlines like “DACA Mayhem” and “Entitled Illegal Immigrants Demanding Amnesty.” He showed several videos of DACA enthusiasts protesting peacefully, something that outraged the host, who said with sarcasm that liberals and progressives assume that immigrants are better than native citizens.

“In fact, if anything, you ought to be deported just so a more deserving DACA person can get your house,” Carlson said in his mocking tone. He added that protestors feel “so entitled and angry and hostile that they would scream at our lawmakers and demand citizenship.”

He asked, “Why does no one love the country enough to find out who these people are and deport every last one of them?”

Carlson’s simplistic brain belch assumed every protestor he showed was an undocumented resident and that peaceful protests should be punished.

And Thursday night—just in case his loyal followers didn’t get enough bile from him—Carlson ran a highlight reel from last week in which he insulted George Cardenas, a Chicago alderman.

“What a loathsome, little demagogue you are!” Carlson said. 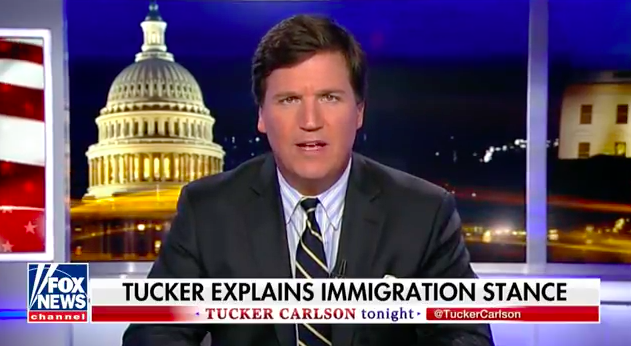