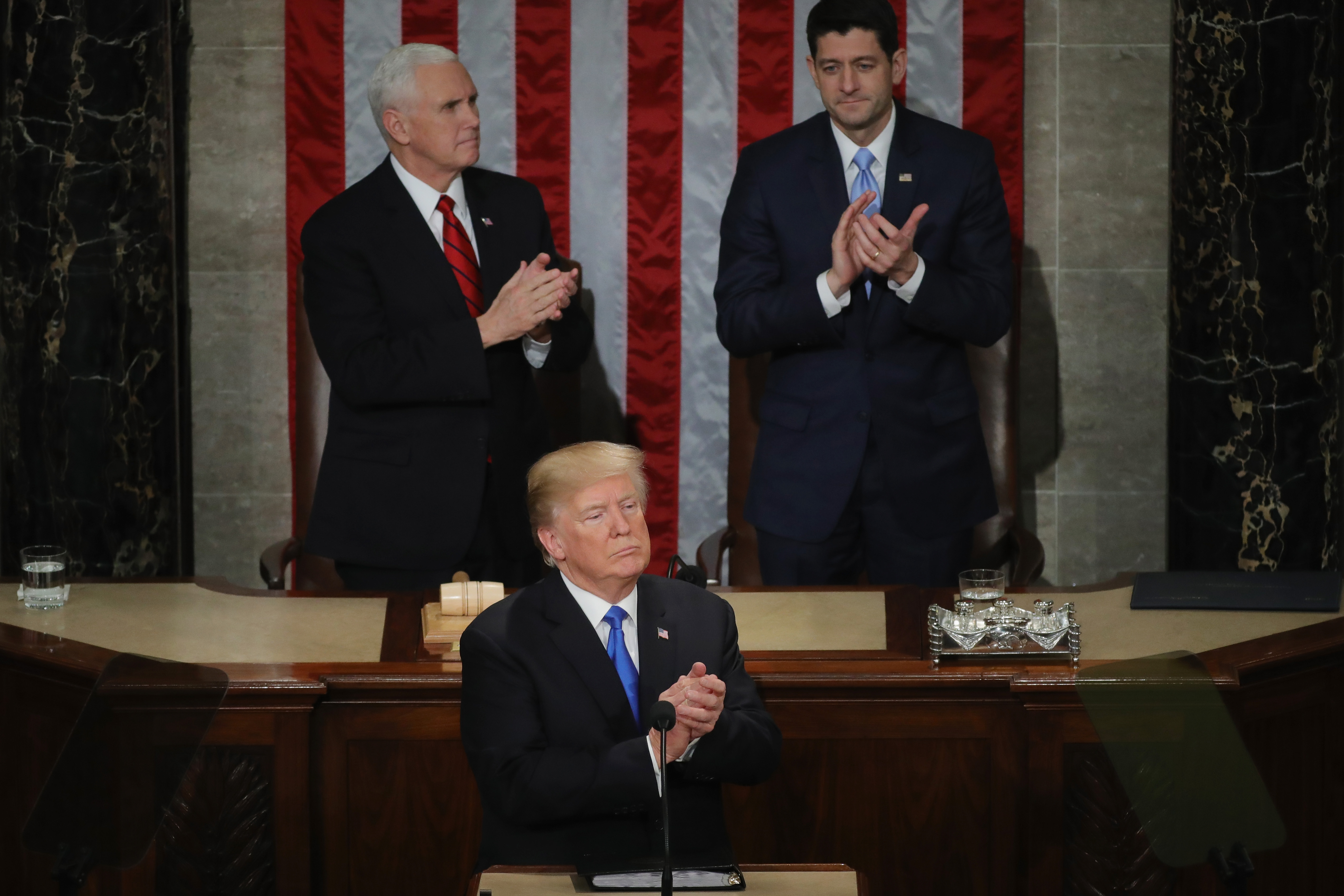 President Donald J. Trump delivers the State of the Union address as Vice President Mike Pence and Speaker of the House Rep. Paul Ryan look on in the chamber of the House of Representatives on January 30, 2018 in Washington, D.C. Chip Somodevilla/Getty Images

If those dour Democrats on Capitol Hill Tuesday night had a sense of humor, one of them might have invited Stormy Daniels as an honored guest to the State of the Union address by President Donald Trump.

Had they done so, Daniels and First Lady Melania Trump could have staged a reality show-style confrontation that would have distracted the nation from all those pesky questions surrounding the Trump gang about blatant Trump Tower collusion, lying under oath, money-laundering, obstruction of justice, Russian espionage, election-meddling, kompromat and treason.

Instead, Trump gave a so-so speech. It may have been rambling but at least it was long. And, amid platitudes and staged sentimentality, he conflated honest immigrants with criminal gangs and terrorists.

Trump crowed, “Americans are Dreamers, too” while blaming “chain migration” for terrorism. Except for most pundits on Fox News Channel, TV commentators noticed the ugly undertone.

“He was a demagogue on immigration,” Eugene Robinson said on MSNBC. “That’s when the speech got dark.”

On CNN, Jake Tapper speculated that Trump “does not quite realize how offensive” he is when he takes that tone.

“He turned off a lot of people in that chamber,” Tapper said.

And Van Jones, on the same network, said Trump was “selling sweet-tasting candy with poison in it” with his divisive racial rhetoric that conflated gang killers with peaceful immigrants.

Some of the strongest comments on the crime topic were heard on MSNBC from Democratic Sen. Kamala Harris of California.

But on Fox, the eminent philosopher Brit Hume said the line that “Americans are dreamers, too” was “Mr. Trump’s best line” of the speech.

“I think a lot of people agree with that,” Hume sniffed.

Then Hume turned his ire to Democratic legislators who didn’t jump up and down to applaud in the manner of their Republican colleagues.

“It was really striking how sour they all looked,” Hume said. “They all sat there looking like their dogs had just died. I don’t suspect anybody was very impressed with that.”

His colleague Mollie Hemingway suggested that Democrats have made “an investment in hatred that was made to oppose this president.”

Why, pray tell, might they feel that way? At least Fox token liberal Juan Williams was allowed to note that the speech wasn’t the “unification” pitch Trump’s aides had promised.

“I don’t think this was the olive-branch speech by any stretch that the White House had advertised,” Williams said. “He took credit for everything. It was bellicose… He gave Democrats every reason to sit on their hands and walk out early.”

Trump’s speech, as written, was a masterpiece of buzz words and applause lines.

He had the Republickers clapping their hands with sentences that ended with phrases such as “American flag,” “faith and family,” “in God we trust,” “American grit,” “our great military” and “our national anthem.”

The last line was a jab at football players who genuflect on one knee to protest violence by police against young black men. By growling “get that son of a bitch off the field” at a speech late last year, Trump has managed to turn The Star-Spangled Banner into a divisive racial issue.

On CNN, David Alexlrod noticed the slow, deliberate pace of Trump’s speaking as he read the words from a teleprompter.

“Almost tired and bored in his delivery,” Axelrod said. Another CNN panelist, Jennifer Granholm, noticed the same thing. “His cadence was so flat,” she said.

On Fox, Chris Wallace noted that Trump’s speech was “too long” and that Trump lost part of his audience harmony when he bragged about how Republicans have repealed the mandate that helped subsidize the cost of “disastrous Obamacare,” as Trump called it.

“You could just feel any of the good will in the room just evaporate,” Wallace said.

In short, the president expressed pride at his damaging of the healthcare system.

Naturally, Trump avoided all mention of the federal investigation into Trump Tower meetings and other dealings with Russian agents and other nefarious characters.

And, of course, he avoided discussing Daniels, the sex film performer who was paid $130,000 right before the 2016 election to keep quiet about a tender romance she had with Trump after Trump’s third wife—dear Melania—gave birth to a son in 2006.

Truth be told, one of the best moments of the night was the entrance into the chamber of the First Lady, who has avoided her husband in the weeks since the scandal was reported by the Wall Street Journal.

She took a separate car to the Hill and dazzled the cameras and the Congressional audience in a modest, well-tailored, crème-colored suit and a humble smile.

The applause was thunderous, and she handled it with grace and aplomb.

But it was hard to enjoy the moment if you were watching on MSNBC and Rachel Maddow was yakking about the designated survivor in case the whole place blows up.

Pssst! Rachel! Watch the monitor! If you see something that is visually dramatic, take a breath, allow the natural sound to grow and let the moment breathe. 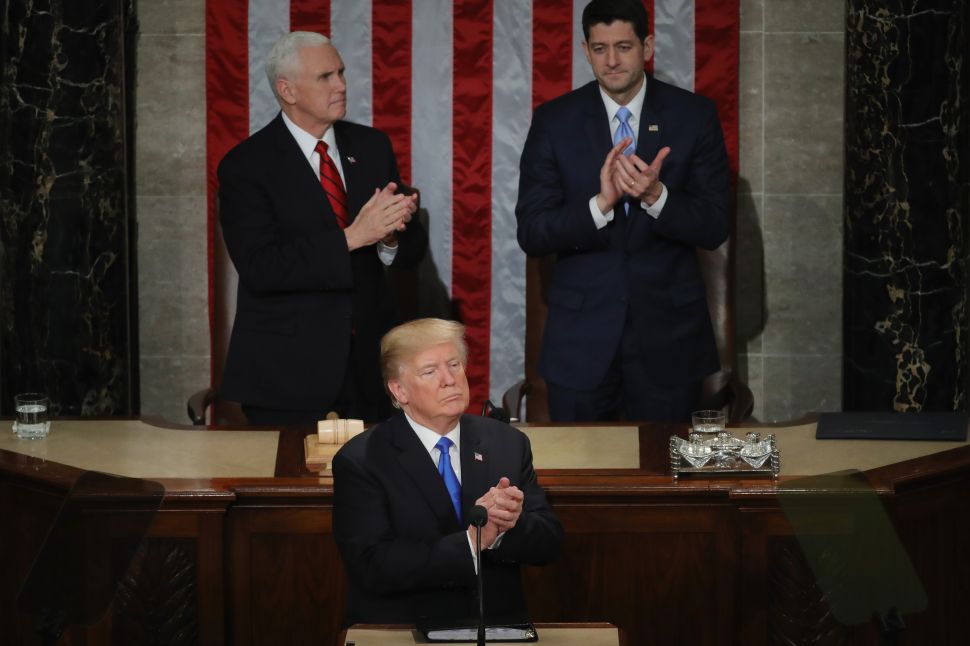