It was three years ago at the World Economic Forum in Davos, Switzerland, that then-Google chairman Eric Schmidt famously declared “the Internet will disappear” in response to a question about the future of the web. He didn’t mean that our constant supply of memes and cat videos would evaporate, leaving us to play solitaire or read books in our free time. Instead, he implied that our day-to-day activities will become so seamlessly integrated with the Internet that we won’t even know it’s there. The Internet will simply be an omniscient, omnipresent entity that informs how we can best live our lives—in sum, the world wide web might just turn into a god.

How we cope with the Internet’s potential divinity is a key theme in Zach Blas’s latest video work, Jubilee 2033. Set in a dystopian near-future in which a new, queer society has risen from the ashes of Silicon Valley, it imagines a time when physical and virtual realities have become indistinguishable from one another. Currently on view at Brooklyn’s Art in General as part of the exhibition “Contra-Internet,” Blas’s first solo show to date, Jubilee 2033 and its accompanying installation invoke a digital mysticism to help us find our strength as newly baptized post-Internet pagans.

“I’m super interested in how big tech companies essentially conceptualize their work as wizardry and appropriate mystical tropes,” Blas told Observer. He used Peter Thiel’s company, Palantir Technologies, the data analytics group that’s leading the charge on predictive policing software, as a prime example. The term “palantir” is actually from Lord of the Rings, in which wizards like Saurun use it as a way to spy on remote lands and distant pasts.

This link between tech and magical lore prompted the artist to create two glass orbs that he installed on either side of the immersive video screen on which the film is screened. Dimly aglow in the disorientingly blacked out gallery space, the right sphere is etched with a frenetic net of lines that represent Schmidt’s totalizing notion that the Internet will engulf the world while the left is inscribed with the fiber optic lines that currently crisscross the globe, revealing the increasing irrelevance of geographic borders. Together they schematically represent two potential futures of our physical world as it transforms into a digital one.

The film itself also largely alternates between two distinct worlds: a CGI-created Garden of Eden after the Fall—a fiery Silicon Valley littered with the bodies of techies and billionaires—and a new promised land rendered in a virtual vector landscape where a hypermasculine silver figure with a female voice named Nootropix acts as an A.I. prophet for the masses. The witness to these two worlds in the film is the doyen of modern capitalism, Atlas Shrugged author Ayn Rand, played by Queer Icon Award winner Susanne Sachsse. She’s accompanied into the future by the characters of Alan Greenspan and his wife; together, they all drop acid and are guided into the post-Apocalyptic wasteland by Azuma, a blue Anime-esque digital angel.

Azuma’s shoes are decorated with a symbol known as “The Hieroglyphic Monad,” a glyph of designed in the 1500s by occultist, astronomer and mystical advisor to Queen Elizabeth I, John Dee, representing the unity of all creation. It functions as a nod to how tech companies emblazon their products with brand icons, but it’s also a subtle nod toward British filmmaker Derek Jarman’s 1978 queer-punk film Jubilee, the plotline of which Blas’s video loosely follows. In the original version, Queen Elizabeth I is transported from the 16th to a grim and decaying 1970s Britain.

According to Blas, much of Jarman’s film was about creating a queer mysticism and he wanted to retain and amplify those ideas in his own version. “I wanted Azuma to link back not only to my own personal reference point for this work,” said Blas, “but also established strains of mysticism—modern and ancient.”

For the artist, the use of symbolism is potent, and he designed his own to accompany Jubilee 2033 in an effort to create a better Internet future. Outlined in a DayGlo acid green on the black floor is a confluence of three different brand design concepts for Palantir Technologies. Together they look a bit like a pentagram fused with a Mercedes Benz logo, scaled up to roughly 10 feet. It acts as a sigil, or seal, which are magical symbols considered to have power and are often used in conjuring rituals. “My reference for this was that ’90s movie The Craft,” the artist laughed, undoubtedly recalling the scene in the cult classic when the four teen witches demarcate a circle on the beach to invoke the spirit of Manon, creator of the universe.

“I’ve named this sigil the Seal of the Absolute,” Blas said, noting that all religions and mystical practices, mainstream or otherwise, are ultimately seeking something complete, unconditional, and infinite, “whether that’s God or something else. But for these tech companies, the absolute is data.” 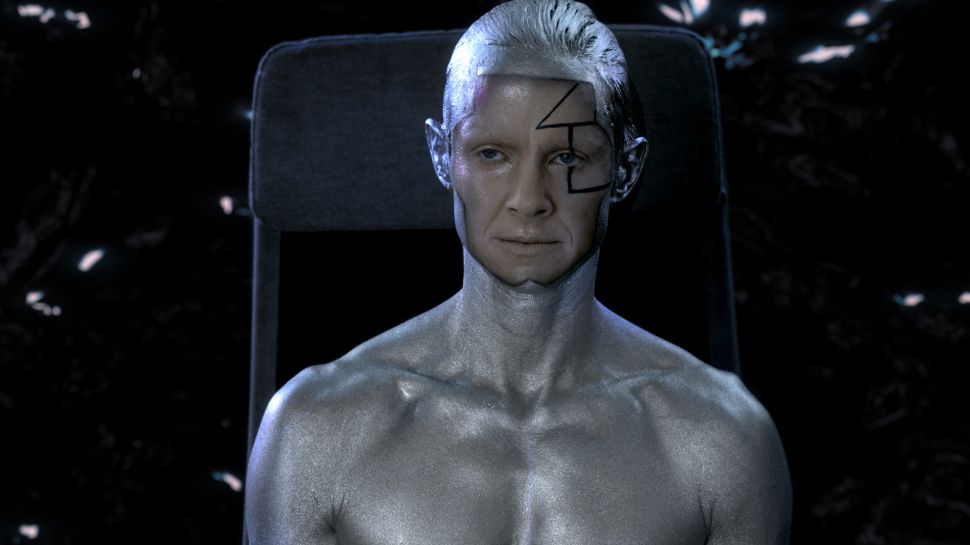