Like few other professions, educators have always been experimenters. That’s not going away in 2018; if anything, it’s accelerating.

Socrates taught in a variety of forums that wouldn’t fit today’s definition of the classroom. Often in schoolhouses they helped build, pioneer schoolmarms taught lessons of their own design to America’s frontier generations. Down the street today, a sixth grader is chatting via Skype with a tutor on another continent.

Distance learning might be a relative newcomer to the education market, but consider how quickly it has grown. Compare the mail correspondence courses of 10 years ago to VIPKID, a global teaching service that enjoys a valuation of $1.5 billion and brings in about $60 million per month.

Online learning isn’t the only feature of today’s education landscape that might flabbergast Greek philosophers. Think augmented reality. Virtual reality. Coding courses for every student — a favorite cause of Apple CEO Timothy Cook.

After watching it track across the horizon for years, the education industry is at a digital crossroads. At a time when a traditional college education has never been more expensive, online courses have never been more popular, with 14 consecutive years of enrollment growth. At a time when two-thirds of teachers say they’re stressed out — almost twice the rate of the general working population — entrepreneurs are pumping out digitally native lessons and courseware such as LearnZillion to ease their burden.

In 2018, the education market is set for digital disruption like never before. We see seven trends shaping up that will collectively change how students learn and teachers teach:

1. AR will steal the spotlight

AR and VR are no longer just buzzwords bandied about in business circles. Although a Technavio report predicts that the educational VR market will grow at a compound annual rate of 55 percent by 2021, this year’s star is AR. The report projects that educational AR will grow by a whopping 82 percent from 2018 through 2021, becoming a nearly $3 billion market in North America alone.

Expect teachers and students to fall in love with 360-degree video as hardware costs plummet. In history class, students will watch the ancient pyramids of Teotihuacan come to life. They’ll see organ systems overlaid on the human body in science class. To learn foreign languages, they’ll engage virtual speakers and get real-time feedback on their phrasings. In a way that textbooks can’t hope to touch, AR and VR are making learning interactive and immersive.

2. Students will take charge of their learning

Self-directed learning has been happening ever since the first human being took a walk in the woods. But while student-directed learning might not be a new concept, resources such as the ISTE Standards for Students are adding structure to self-guided education.

Won’t self-directed learning cut educators out of the equation? Hardly. When students are in the driver’s seat, they can explore whatever piques their curiosity at their own pace. Teachers, then, get to spend more time teaching and coaching and less time managing systems and designing curricula.

Science, technology, engineering, and mathematics is already a staple of western education. Expect it to become an even bigger focus area in 2018, given that STEM jobs have grown nearly twice as quickly as other roles since 2008.

In 2018, STEM will be an all-hands-on-deck area of education. Traditional channels such as AP computer science classes are attracting more women and minorities, while nonprofits such as Code Savvy are offering free coding courses, and for-profit companies such as Learn Jelly are teaching coding to kids as young as kindergarteners. Even for those who don’t wind up in STEM fields, such courses and initiatives teach life skills like computational thinking, critical reasoning, and problem-solving.

4. Games and assessments will change the lesson plan

Does it seem like educators have been hobnobbing about assessment for learning tools for the past decade? They certainly have, but that doesn’t mean AFL isn’t ripe for reassessment — pun intended — in 2018. Also known as formative assessment, AFL helps teachers check and adjust teaching and learning as part of a lesson rather than at the end. And like everything else about the classroom environment, AFL is going digital.

At a time when governments of nations such as Australia are considering new assessments to detect early challenges in reading and math, companies such as Kahoot! and Socrative are making assessments more fun and less expensive through an array of apps and games. Incumbents in the space are also innovating, with assessment company ACT dedicating an entire team, ACTNext, to improving measurement practices around learning, knowledge acquisition, and collaboration in modern learning environments.

Is the classroom a brick-and-mortar location or a state of mind? Now that 6 percent of the student population has taken a virtual class, the classroom has never been more mobile. At Arizona State University, an early proponent of massive online open courses, free online courses woo candidates from nearly 200 countries.

While still mostly a feature of the higher education space, blended learning will continue to make inroads in elementary and secondary schools this year. According to an August 2017 report by the National Center for Education Statistics, 21 percent of public schools offered at least one course entirely online during the 2015-2016 school year. Fifty-eight percent of those schools were high schools, while 13 percent were middle schools, and just 3 percent were elementary schools.

6. Online learning platforms will graduate to the next level

Software-as-a-service learning management systems such as Google Classroom have already emerged into the education market’s mainstream. In Texas, almost all districts have them in place. Why? Because educators see Texas-sized savings, as well as stronger student outcomes. Plus, Google Classroom’s tools are so easy to use that no fewer than 30 million students use Google Docs and Gmail at school.

This year, teachers will use LMSs to mix and match content like never before. English teacher Cheryl Morris, for example, makes short videos of herself discussing assigned texts. Some students elect to watch Morris on video, either at home or in class, while others prefer to read texts themselves. By giving students options, Morris has dropped her students’ failure rate from 10 or 15 percent to zero. Expect more and more teachers to provide modular digital content through LMSs, which might begin to double as social platforms for students as well.

Who teaches the teachers, and how — not to mention where — does their continued learning happen? Increasingly, teachers are turning to online coursework and microcredentials themselves to stay on top of fast-changing fields. Today, about 40 percent of schools are offering online professional development for their teachers, almost twice as many as in 2013.

To help teachers show off their online learnings, microcredentialing will explode in popularity. In addition to nonprofits such as Digital Promise, sometimes called the National Center for Research in Advanced Information and Digital Technologies, for-profit companies will forge relationships with districts in hopes of securing a slice of that $18 billion professional development pie.

Although 2018 might still feel like a mere extension of 2017 for the education market, it’s more than the tail end of an outstanding year. In fact, 2018 will be a critical maturation period for the digital tools that are already transforming the classroom. Microcredentialing might not catch students’ and teachers’ eyes quite like AR, but such quiet innovations are every bit as important. Together, they’re continuing the tradition of educational experimentation and innovation that’s been millennia in the making. 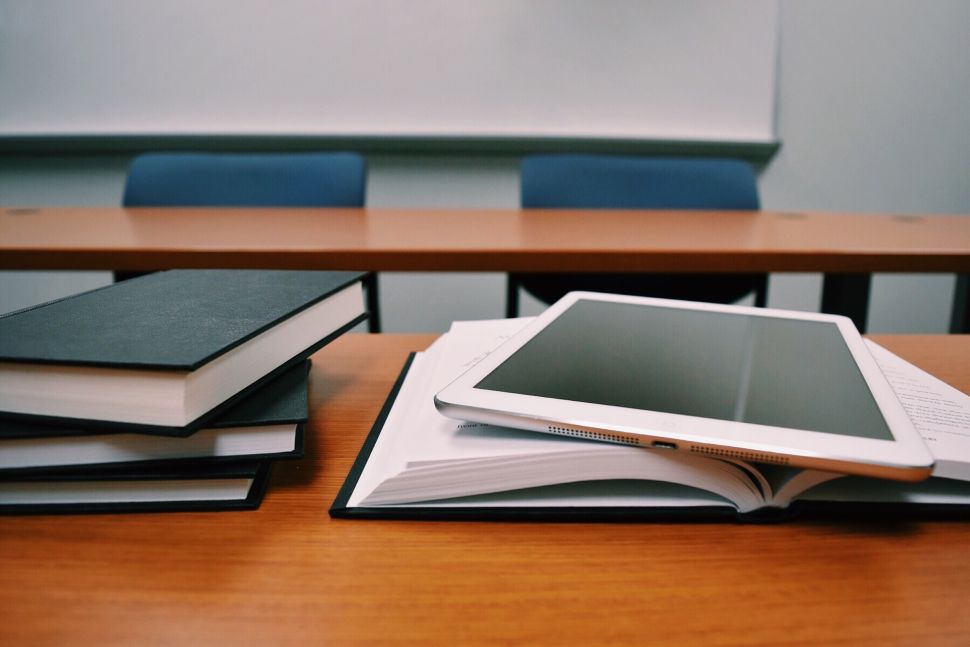