“Comics are way more serious than you think,” San Francisco-based artist Koak said. “The humor in them can be really helpful when dealing with difficult issues, but I think I’ve always gravitated toward them in order to explore a certain kind of darkness.”

Koak’s comic-inspired drawings and paintings of voluminous nude women caught in the act of everyday activities ranging from chores to child-rearing, however, have recently propelled her into the art world spotlight. Within the space of a couple of years, the artist has gone from selling her drawings for $40 at various artist-run spaces and pop-ups around the Bay Area to mounting her works in exhibitions around the world. She is currently featured in the exhibition “NSFW: Female Gaze” at New York’s Museum of Sex and is on view at London’s Union Pacific Gallery as part of the co-op art fair, Condo.

Koak suffered a lot of sickness when she was child, which often relegated her to indoor activities. That when the 35-year-old artist became obsessed with X-Men comics, often copying characters out of the books. “I was in love with Storm,” she told Observer. But her practice now is much more idiosyncratic, although she still draws inspiration from comic artists such as Dash Shaw and Ulli Lust. She also cites Henri Matisse and Joan Miró as artistic influences, although her use of geometric shapes and heavily drawn lines often invites comparisons to Pablo Picasso and his cubist style.

“I personally don’t feel that influenced by him,” she said, noting that, as a known philanderer with a history of assault against his significant others, Picasso is a problematic figure in history when it comes to equal treatment of women. “It sucks as a female artist always being compared to really creepy old dead guys, you know?” she laughed. “I like to think I make work that’s empowering for women. But if you look at it and just see Picasso then O.K., cool, I guess.”

The artist, who earned her M.F.A. in Comics at the California College of the Arts where she studied under well-known illustrator Barron Storey, developed her own distinctive style while creating a multi-volume comic autobiography about her chronic and debilitating struggle with Pelvic Inflammatory Disease. “I’ve been working on it for over a decade; I don’t think I’ll finish it until I’m, like, 80.”

She sees the swift momentum of her own career as part and parcel of a growing interest in comics within the fine arts. “I think there are so many amazing things happening in the field right now because they’re accessible and expressive,” she said. “There’s a rich history of comics in so many other countries, but for a long time American comic culture was limited to superheroes and the whole good vs. bad storyline.”

The ability to experiment with new narratives, more diverse characters, and different styles comes on the heels of the abandonment of the Comics Code Authority guidelines that prohibited, among many other things, unsavory depictions of law enforcement and “sexual abnormalities.” Created by the Comics Magazine Association of America in 1954 in an effort to stave off McArthur-era government regulation, the code became a self-censoring crutch that not only limited what and how comics could be created, but also fostered a largely heteronormative white male perspective. While these rules haven’t been hugely enforced since the 1970s, they have only been altogether abandoned in the first decade of the 21st century and have indelibly shaped comical expression in the U.S.

“In countries like France and Japan, you see comics that are so specific and niche. The protagonists don’t need to be superheroes to be worth depicting,” Koak explained, noting that there are whole genres devoted to culinary fetish and depictions of gay men drawn by women. For the artist, dynamically drawing women in the midst of the mundane—feeding babies, bathing themselves, cleaning kitchens—isn’t meant to relegate them to traditionally ascribed gender roles. Instead, it’s a way of reclaiming their agency in these situations.

“When I’m drawing figures, I want them to feel hyper-present and emotive. I’m trying to amplify the moment of being in the moment,” she said. “I think that’s really lacking in historical depictions of women in art. It’s always been about the act of looking at them rather than experiencing what they’re doing.”

In March, Koak will join San Francisco’s Minnesota Street Project Liquitex residency, where she’ll work on a new body of work before mounting a solo show at Walden Gallery in Buenos Aires later this spring. “My latest batch of work is about female creativity, like what it means to birth something, what it means to bring life into the world,” she said. “I feel like these are embarrassingly simplistic ideas, but the great thing about comics is that they can explore some of the most complicated aspects of life.” 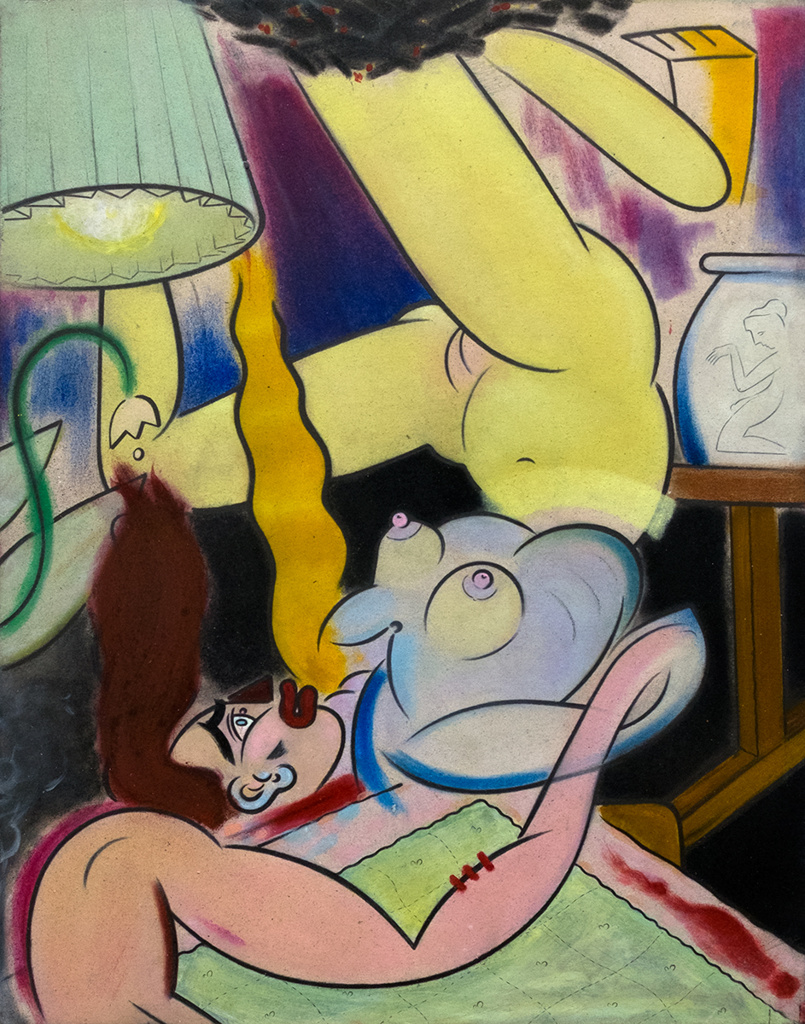