Everywhere you look, pundits are talking about automation, machine learning, and artificial intelligence. For some people, this is exciting. It’s a new world of efficiency and lower costs for goods as we witness the biggest breakthroughs in production since the industrial era began.

However, many people are also scared. Bestselling books and sci-fi blockbuster movies have warned us for decades about the dangers of fully automated, artificially intelligent technology. People are terrified that automation could mean the end of low-skilled jobs. For instance, in 1955, General Motors was the largest company in the United States and employed 576,000 people. Sixty years later, Apple was the most profitable company in the U.S., and it had just 66,000 employees.

Whether you’re excited about automation’s potential or worried about its implications, you can’t deny that automation is here. Fortunately, there’s a way we can work with automation instead of against it.

Outsmarted by Our Own Machines

The fear of automation eliminating the need for human employees is strong. According to the McKinsey Global Institute, up to 73 million workers could be displaced by increasing automation by 2030. This often makes it feel like we’re in competition with machines and losing badly.

That’s not just a metaphor: Humans haven’t seemed on top since Deep Blue beat Garry Kasparov at chess in 1997. In 2011, IBM’s Watson easily outwitted the reigning “Jeopardy!” champion, and in 2016, Google’s AlphaGo beat the best Go player in the world. No-limit Texas Hold ’Em poker is the most recent game to be dominated by a machine.

When it comes to work, it’s easy to see what machines can do and to believe we’re beat. But what if it weren’t a competition?

A chess tournament in 2005 allowed humans and machines to work together. Several top players entered with state-of-the-art software. The winners, though, were two amateurs with average machines. Their secret was their unique and advanced process of interacting with the machines.

A computer can examine every possible move in a chess game, but a human can quickly zero in on the few moves worth considering. Rather than analyzing the entire game, the winning chess players focused the machine on the few most relevant moves. This methodology is called the human-computer symbiosis, and it’s the secret to successfully navigating the future of automation.

This concept was first introduced by computer scientist J.C.R. Licklider in 1960. In a short paper titled “Man-Computer Symbiosis,” Licklider started with the assumption that eventually, computers will be able to do everything humans can do. As Licklider says, “It seems entirely possible that, in due course, electronic or chemical ‘machines’ will outdo the human brain” in functions that, today, we consider impossible for technology.

However, he suggested we’d experience a “golden period” when humans and computers would augment each other and achieve more together than either could do alone. We are in that golden age today.

The human-computer symbiosis does not mean full automation, with computers handling every task. Neither is it semi-automation, in which humans do the work that isn’t easily automated. A true symbiosis is humans and systems working as partners, both playing to their individual strengths. Computers have a big role in capturing and analyzing data, but humans are still vastly superior when it comes to identifying new patterns and creating beautiful, meaningful designs.

For example, the 9/11 memorial at the World Trade Center used an algorithm that structures groups of victims by their relations to friends and colleagues rather than alphabetically. The algorithm did all the grunt work, but human graphic designers still needed to take that information and display it beautifully.

In weather forecasting, air traffic control, and medical diagnosis, machines are contributing more than ever in ways humans could not. However, humans still have roles to play in handling emergencies, recognizing anomalies, and interpreting non-textual clues.

The key to this level of collaboration is to reduce the friction between humans and computers. In the 2005 chess match, it was that collaborative process that made the human/machine chess team the best, and it’s the only way to truly prepare for the introduction of increasingly intelligent machines.

The first step to creating a good symbiosis is to let each group do what it does best. Machines are tireless, and they excel in processing data, analyzing results, computing, storing data, and making rational decisions. Humans excel in creating connections, personalizing interactions, showing restraint, interpreting context clues, creating hypotheses, identifying new patterns, and setting goals.

The second step is to reduce friction, which requires integrating a human being into the automation process. Licklider thought the main aim of a symbiosis was “to think in interaction with a computer in the same way that you think with a colleague.” In other words, humans and computers should consider themselves on the same collaborative team.

The final step is to advance human skills to keep up with the symbiosis. Last year, information technology giant Infosys announced it was cutting 9,000 lower-level employees due to automation. The company also announced that it would train many of those employees in more advanced areas such as artificial intelligence and machine learning — areas necessary for a better symbiosis.

This and similar moves have led to increasing talk about “cobots,” or machines designed to work alongside humans. Healthcare is one industry in which cobots will flourish most. Machines already have so much to offer in diagnostics — take IBM’s Watson, for example — but the best diagnostic teams will be the ones run by doctors working alongside technology.

In supply chain and transportation, similar human-machine teams have already changed the landscape. We aren’t even surprised anymore by the fact that we can order a product online and receive it the next day, but it’s possible only because companies such as Amazon rely on robots to do the heavy lifting while humans keep an eye on the process. Moving forward, humans will likely move out of the manual workforce of driving trucks and trains and will move into systems, logistics, and traffic patterns.

Human-computer symbiosis is the framework for understanding and fully utilizing automation, at least until robots get so smart that they no longer need human input. Regardless of whether that day ever comes, we can prepare for the automation revolution by learning to make machines our partners — not our competitors.

Suresh Sambandam is the founder and CEO of OrangeScape, a company offering SaaS solutions for workflow automation, such as its flagship product, KiSSFLOW. 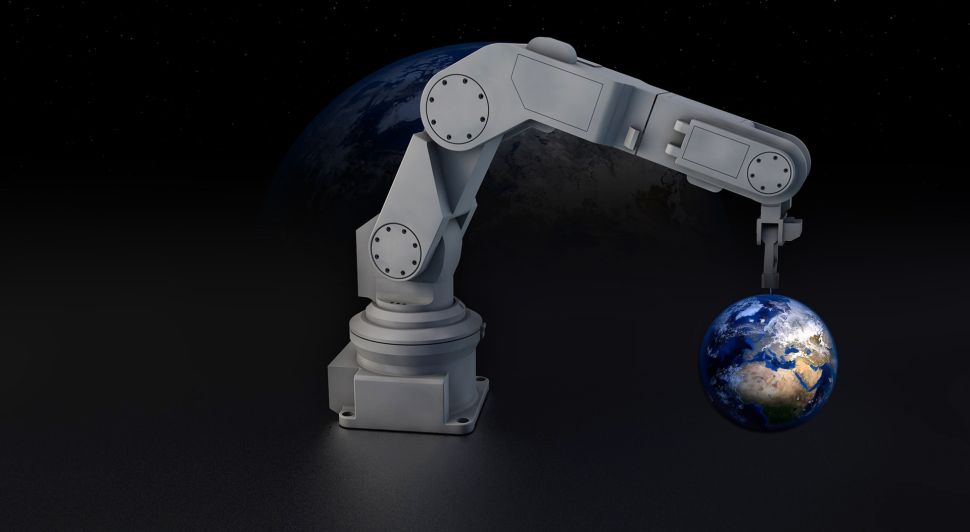