In the last year alone, the Microsoft co-founder has given away $5 billion in Microsoft shares, donated a combined $400 million to Alzheimer’s prevention and global warming research and recommended dozens of books in his spare time.

But yesterday, Gates took time out of his hectic schedule to host his sixth Reddit AMA. While the tech titan has admitted in previous Q&As that he sometimes wears a disguise in public, this year’s edition was more focused on policy.

Most of the headlines around Gates’ AMA focused on his reservations about Bitcoin—he’s a skeptic about cryptocurrency like fellow tech pioneer Steve Wozniak. But he’s also worried about crypto’s real world effects.

“The main feature of cryptocurrencies is their anonymity. I don’t think this is a good thing,” he wrote. “Right now cryptocurrencies are used for buying fentanyl and other drugs, so it is a rare technology that has caused deaths in a fairly direct way.”

Many commenters said Gates’ argument was nonsense, and said he might as well ban paper money too, since it’s also used for drug deals. But he said the difference with Bitcoin is that the drug purchaser doesn’t need to be present at the transaction.

Outside of this contentious exchange, Gates had some other important observations. Here’s a look at his Reddit musings.

On Whether the World Will Face Another 2008-Style Financial Crisis

“Yes. It is hard to say when, but this is a certainty. Fortunately we got through that one reasonably well. Warren [Buffett] has talked about this… Despite this prediction of bumps ahead, I am quite optimistic about how innovation and capitalism will improve the situation for humans everywhere.”

“Automation has been driving productivity ever since the Industrial Revolution, including things like tractors and garment making. With software this will continue to accelerate, so we need to think about how we educate people for the new jobs that will emerge. Overall automation is a great thing—eventually we won’t have to work as much, but we are still at least a generation away from a big change there.”

On Where Technology Goes From Here

“The most amazing thing will be when computers can read and understand the text like humans do. Today computers can do simple things like search for specific words, but concepts like vacation or career or family are not ‘understood’… It has always been kind of a holy grail of software, particularly now that vision and speech are largely solved. Another frontier is robotics, where the human ability to move and manipulate is amazing.”

On His Personal Goals

“For the Foundation, reducing childhood death and malnutrition and ending polio would be the biggest three things. For innovation, it would be an energy breakthrough and improving the way we educate kids. For my family, it is making sure the kids are ready to go to college and have a great experience there.”

On Whether He Misses Microsoft

“There was a certain urgency to everything we were doing to stay ahead that meant the speed of activity was very high. I miss this a bit. I had to take Think Weeks twice a year just to step back and see what the longer term trends were. Now I work on things like malaria where I wish there was more competition to solve the problems and things moved faster.”

On His Favorite People

“Melinda(Gates, his wife) and Warren are my two favorites followed by Bono. Most celebrities I don’t know very well. I do get to meet a lot of political leaders, and Nelson Mandela was the most impressive ever. Jimmy Carter is also amazing.”

On His Favorite Meal

“I do make myself tomato soup sometimes. It is kind of a comforting food and reminds me of doing the same when I was growing up.”

On Why He Doesn’t Snack

“I avoid having candy bars and nuts around since I would grab almonds (salty) or M&Ms if they were just sitting there.” 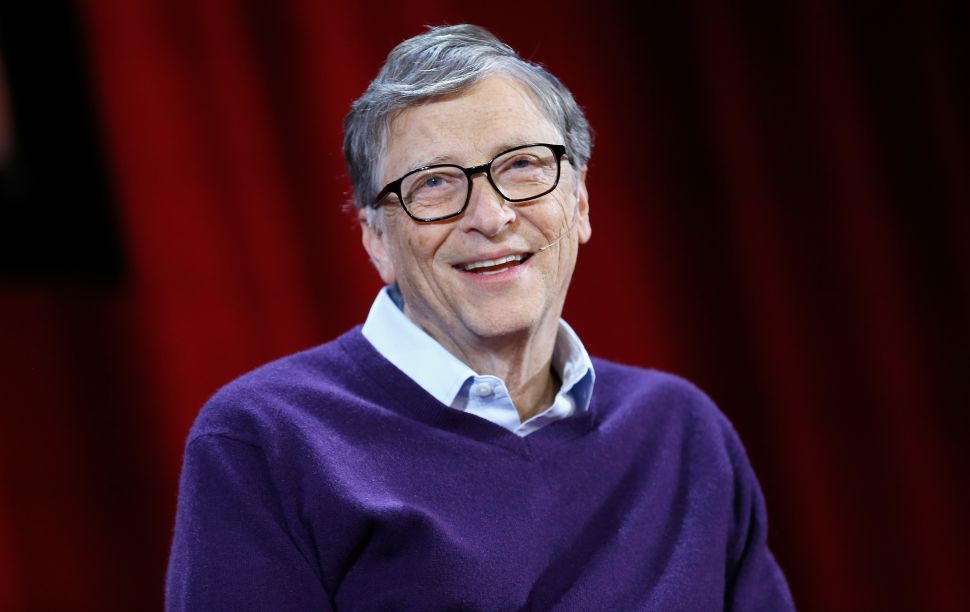