Evangelist and minister Billy Graham died this morning at the age of 99. He preached in 185 countries and met with 12 presidents through his ministry work.

Like fellow religious leader Pope Francis, Graham also preached about technology’s role in faith. He said that when used correctly, tech could do wonderful things.

Graham articulated these feelings during a 1998 TED Talk in Toronto. He started out by admitting that as an 80-year-old minister, he felt “out of place” in a room filled with tech titans.

But as Graham warmed to his theme, he talked about how “technological revolution” existed even in biblical times. He explained that King David introduced iron to Israel, allowing the Israelites to use advanced farm equipment and military weapons instead of crude stone tools.

“The introduction of iron, in some ways, had an impact a little bit like the microchip has had on our generation,” Graham said.

Technology continued to advance from those ancient times. Graham explained, “we can probe the deepest secrets of the universe and dramatically push back the frontiers of technology.”

But there are still some problems tech can’t solve. The most serious, according to Graham’s talk, is human evil.

“Why do we have wars in every generation, and in every part of the world?” Graham asked. “We can’t get along with other people, even in our own families. We find ourselves in the paralyzing grip of self-destructive habits we can’t break.”

Technology, as great as it is, plays a role in this evil as well. Graham specifically mentions computer viruses, which have gotten progressively more deadly in the two decades since he spoke.

Another age-old issue tech can’t solve, according to Graham, is human suffering. He said that given his advanced age and health problems, like phlebitis and Parkinson’s disease, he had some experience with this.

But according to Graham, poverty is a worse form of suffering than physical frailty.

“We have families that self-destruct, friends that betray us,” he said. “Unbearable physical pressures bear down on us.”

While many researchers act like they can control mortality, Graham said that “death is inevitable.”

Some scientists realize this: Graham spotlighted Blaise Pascal, a French mathematician and computer scientist who became a theologian late in life. But others don’t ever figure it out.

Graham ended the talk by counseling the audience to take certain things on faith, using himself as an example. He said he was first called to be a minister when an indescribable feeling came over him while milking cows at his family farm in North Carolina.

“I had to make that decision,” Graham said. “I couldn’t prove it. I couldn’t take it to a laboratory and experiment with it. But by faith I said ‘I believe Him,’ and he came into my heart and changed my life. And now I’m ready, when I hear that call, to go into the presence of God.”

Graham didn’t “hear that call” until nearly 20 years after he made this speech. But his blending of technology and faith has been picked up by other religious leaders and that may not have happened if Graham hadn’t spoken at TED in the first place.

So while 80-year-old Graham may have felt like a fish out of , he started an important conversation that continues for people of all religious beliefs to this day. 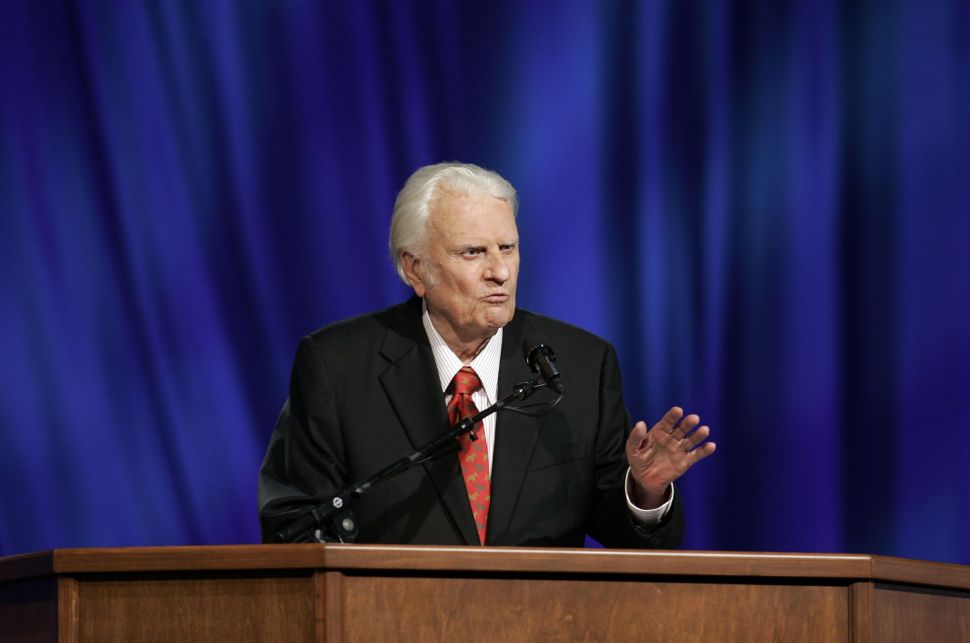