We knew Black Panther was going to dominate the President’s Day weekend box office, but we didn’t know exactly by how much or how the film would perform overseas.

Now that the first official numbers are in, we can say with complete authority that Black Panther is a full-blown cultural phenomenon.

Black Panther mauled its way to a mind-boggling $201.8 million over the three-day weekend and an estimated $235 million over the four-day holiday weekend, per THR. Sunday’s estimates had initially pegged the film at $192 million and $218 million, respectively. It is believed that the movie’s four-day gross could climb as high as $240 million once the final numbers are tallied.

Update: Black Panther earned $241.9 million over the Friday-Monday holiday. Does this assuage some of the concerns about the future of the Marvel Cinematic Universe?

That gives Black Panther the fifth-largest traditional weekend opening in domestic history behind only Star Wars: The Force Awakens ($247.9 million), Star Wars: The Last Jedi ($220 million), Jurassic World ($208.8 million) and The Avengers ($207.4 million). It also marks the biggest February opening of all time and an 88 percent increase over President’s Day box office from last year.

In four days, it has earned more than Warner Bros.’ Justice League ($228 million) did domestically throughout its entire run.

The film’s success boosts 2018’s box office revenue seven percent in year-to-date comparisons, which is important given how 2017 came in under expectations.

Overseas, where the film opened in every major market save Russia (February 22), Japan (March 1) and China (March 9), the movie earned a strong $169 million. Traditionally, predominantly black films have struggled in foreign markets, but Black Panther has proven to be a game changer. Its international take puts its worldwide total at an estimated $404 million through Monday.

“There are seven billion people on this planet, and they come from all walks of life. Audiences deserve to see themselves reflected on the big screen. Beyond being the right thing to do, it makes for richer storytelling,” Disney distribution chief Dave Hollis told the outlet.

Black Panther cost an estimated $200 million to make and opened on more than 4,000 screens in the U.S. on the backs of a stellar 97 percent rating on Rotten Tomatoes.

But how will it fare going forward?

Thor: Ragnarok carried with it a budget of $180 million and earned $122.7 million in its opening weekend while scoring a 92 percent on Rotten Tomatoes. For the sake of argument, let’s assume Black Panther posts a similar multiplier as Ragnarok‘s 2.8x. Now, we’re looking at a total domestic haul of (nearly faints) $564.7 million.

A lot of the movie’s overall take will depend on how it continues to perform overseas.

Like most blockbusters, Thor: Ragnarok earned nearly 65 percent of its total gross from foreign markets, which may not be a good indicator for Black Panther. Just for fun, let’s say it matches Wonder Woman‘s 50 percent overseas gross (though that may be highballing it slightly). If that were the case, we’re looking at a worldwide total of $1.12 billion, which would put Black Panther within spitting distance of the top-15 all time.

Realistically, the film is likely on track for anywhere between $850 million to $1 billion-plus.

All of this is just a fun guessing game of conjecture, but you can see how high of a ceiling Black Panther now has following its mighty opening weekend. 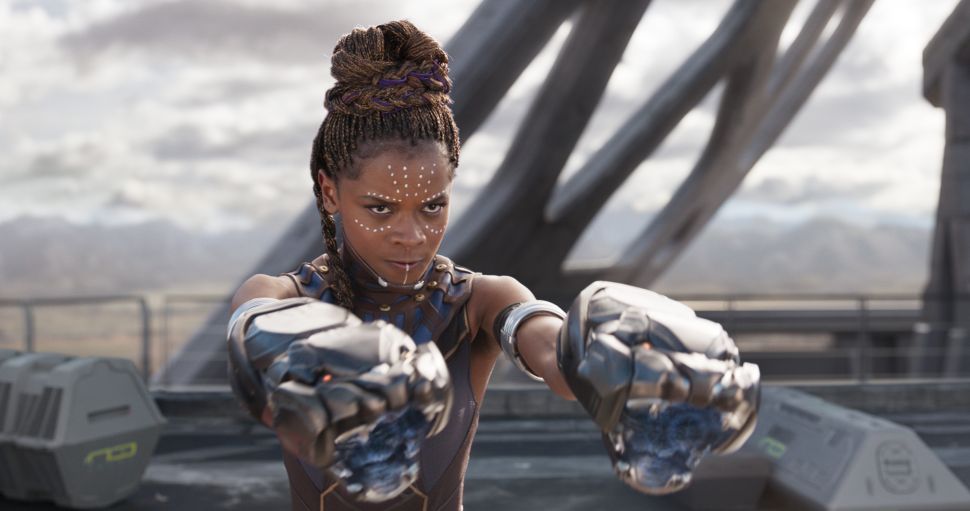