Director Ryan Coogler may have created the most influential blockbuster of 2018… and it’s only February.

Black Panther earned $241.9M over the four-day holiday weekend in North America alone, received a 97 percent rating on Rotten Tomatoes and produced an original soundtrack that debuted at No. 1 on the Billboard 200 chart.

Unsurprisingly, it’s earned an abundance of celebrity love on Twitter.

Congrats to the entire #blackpanther team! Because of you, young people will finally see superheroes that look like them on the big screen. I loved this movie and I know it will inspire people of all backgrounds to dig deep and find the courage to be heroes of their own stories.

Black Panther is more than a movie, it’s a movement. If you can be a hero in someone’s life, be one. #wakandaforever✊🏾 #BlackPantherIsMoreThanAMovie #BlackPantherChallenge pic.twitter.com/ZshYRwe89t

My whole family's out watching #BlackPanther and I stayed here to work on the novel and I'm currently full of a bitter, aching regret.

(We certainly hope you’ve found time to see it by now, J.K. Rowling!)

Just watched Black Panther, RUN 2 this Film, Chadwick Boseman, Michael B Jordan off the hook, & EVERY woman in this film, no matter your own race, is the woman you want 2 be. Believe me when I tell you C this movie, it’s SO much more than you think it is.

I was blessed to see black panther the movie 🎥 🍿 so amazing !! I will be watching for like 10 years straight 🙏🏽🔑🙏🏽

One of the best things you can do for yourself and/or the ones you love is purchase some #BlackPanther tix. I know it’s expensive to go to the theater, but its worth it for this one. You will exit forever impacted.

I woke up this morning, opened my eyes and whispered to myself “Black Panther is here.” And I was instantly recovered from Idris’ engagement. #BlackPanther

Huge congrats #BlackPanther on the staggering weekend. So happy for your incredibly meaningful success. Wonder Woman posse can’t wait for break in schedule to see it! You're changing the world. What a wonderful thing! Congrats to you all @theblackpanther #RyanCoogler

BELIEVE. THE. HYPE. All hail the king #WakandaForever pic.twitter.com/qENThMS9qU

Not that anyone has to choose favorites, but it’s clear that Deadpool star, Ryan Reynolds, is impressed by King T’Challa. Hidden Figures actress Janelle Monae gives her love to the women of Wakanda as well.

The WOMEN OF WAKANDA ?! 👊🏾🙌🏾#BLACKPANTHER

While Forbes credits Black Panther as the “biggest solo superhero launch of all time,” it’s easy to find a hero within so many of these characters, not just T’Challa. They each have distinct qualities that offer viewers a wide selection of likable characters that just about cover the spectrum of fanhood.

Little sister Shuri (Letitia Wright) is maybe the most recognizable role model for young girls, representing women in STEM (science, technology, engineering and math). She faces age and gender-based discrimination early on in the movie but helps save the day, multiple times, through her inventions.

We can sympathize with the emotionally conflicted W’Kabi (Daniel Kaluuya) and the well-intentioned antagonist, Erik Killmonger (Michael B. Jordan). Both characters try to rid the world of injustice in their own way.

Also, who can’t fall in love with the loyal Okoye (Danai Gurira)? Or the hilarious M’Baku (Winston Duke)?

Of course, it was easy to adore the independent Nakia (Lupita Nyong’o) and Wakanda’s humble leader, King T’Challa (Chadwick Boseman) right from the start.

I guess the world just lucked out that the cast happens to be just as inspiring in real life.

Imitation is the best form of flattery: @chadwickboseman I admire your quiet, confident, regal nature. You brought the wealth of all your knowledge, wisdom and physicality to T'Challa. You led us into the land of Wakanda without ego, without pretense, without fear. We reap the benefits now squarely because of your courage, your fierce dedication, your intense passion, and your grueling workout regimen. And I will never get enough of the way you say the word "because." We celebrate BREAKING BOX OFFICE RECORDS with @blackpanther for many reasons, but chief among them is because we had you as our king. Enkosi Kumkani!! And congratulations on your @rollingstone cover. From someone who loves you. #CoverCosplay My 📷 by @vernonfrancois Chadwick's by Norman Jean Roy #BlackPanther #WakandaForever

No wonder Black Panther is generating so much love from celebrities and fans around the world. The first big blockbuster of 2018 may very well end up as the best. 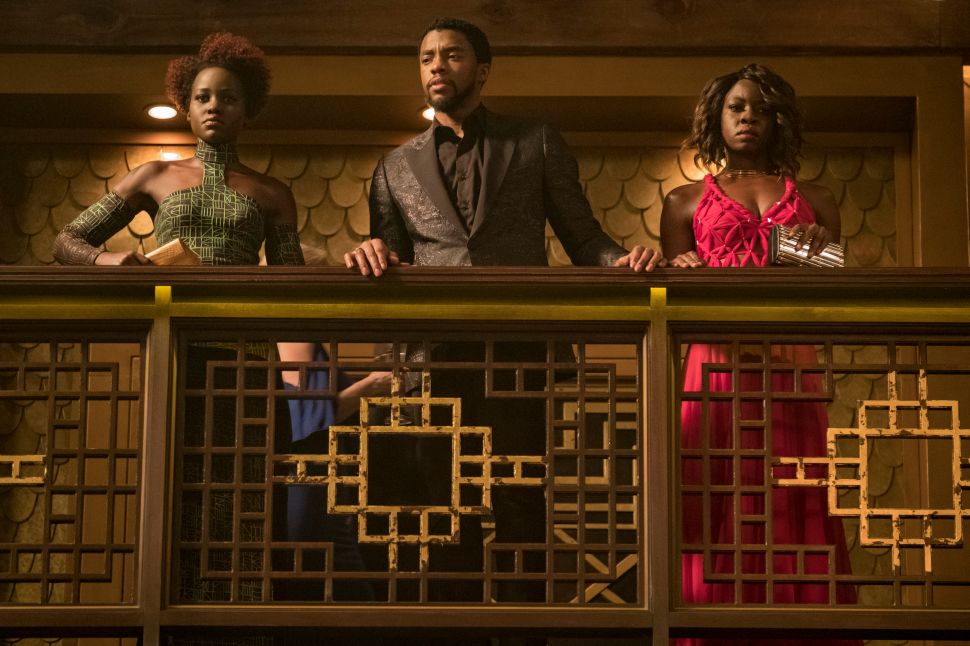