The character called “Man in Chair” in The Drowsy Chaperone might have been recently heard to echo the words of Michael Corleone, muttering, “Just when I thought I was out, they pull me back in.”

He is the Tony-winning creation of Bob Martin, who also earned a Tony nomination for playing the character on Broadway in 2006 and 2007. A nameless nebbish who revels in being a musical-theater savant, he’s chomping at the bit to share with you his salient minutia about an almost forgotten (in fact, entirely fictitious) Julie Gable-Sidney Stein musical of 1928 known as The Drowsy Chaperone. He just puts a needle to the original cast recording, and the show materializes before your eyes.

Such a gift doesn’t create a lot of job opportunities, so Martin in the interim has—as they sing in Frozen—“let it go” and moved on to other chores, flitting from flower to flower, pollinating his second, third and fourth long-running Broadway musicals.

Two of these are set for spring tryouts at the Paper Mill Playhouse in Milburn, N.J. He’s adapting The Sting (March 29-April 29) from the Oscar-winning Paul Newman-Robert Redford flick for the director (John Rando) and songwriters (Mark Hollmann and Greg Kotis) of Urinetown, following that with Half Time (May 31-July 1), a show about a company of elderly dancers, which he’s writing with Chad Beguelin and Matthew Sklar. These three previously collaborated on Elf, which has had a couple of limited Christmas gigs on Broadway, and now they have a fall date on Broadway with The Prom, directed by The Drowsy Chaperone’s Casey Nicholaw and starring said chaperone, Beth Leavel, along with Christopher Sieber and Brooks Ashmanskas.

Even with this intense workload, Drowsy dies hard for Martin. One night last month, he slipped away from rehearsing one of the above and hosted a delightful little sing-and-dance-through of the show at Feinstein’s/54 Below with some main stem stars and replacements. Then, the phone rang—in Godfather fashion—with an offer he couldn’t refuse: a pocketbook stage comeback of seven performances (February 7-11) for Man in Chair, where he curates an evening of all his pet musicals so far overlooked by Encores!—“not just The Drowsy Chaperone but the entire Gable-Stein canon.”

Josh Clayton, associate music director for the City Center series, is given sole credit for resuscitating Man in Chair’s career. He was watching his bosses—conductor Rob Berman and artistic director Jack Viertel—assembling a potpourri of 20 songs from eight shows on Encores!’s to-do list (“nine, if you count the Subways Are for Sleeping overture,” said Viertel), and they were having trouble figuring out how to get from one show to another. Clearly, this is a job for Man in Chair, Clayton quipped from the sidelines. It was a Eureka! moment, and the show suddenly had a shape.

Hey, Look Me Over! is the title for this pupu platter of (hopefully) coming attractions from Encores!. It runs from Jamaica in 1957 to Mack & Mabel in 1974, but the filling in the middle is strictly 1960s confection. “It was a long winnowing process,” Viertel confessed. “We started with 50 shows and quickly realized it would be a more cohesive evening if all these shows came from the same period. Every time we’d try to match up Jerry Herman with Gershwin, it clashed stylistically, causing a weird disconnect.

“There are lots of shows from this period we’re interested in doing. Also, selfishly, I have to say it’s when I started going to the theater by myself—I was 13 years old, and I saw All American at a Saturday matinee—so it’s a trip down memory lane for me.

“One thing we discovered—quite unintentionally—is, when we took all these shows and put pieces of them together, they formed a very interesting picture of America at that particular time. If it’s true, we don’t deserve any credit for it. It just happened. There’s wanderlust (Greenwillow), there’s the entrepreneurial oil people (Wildcat), there’s a show about immigrants (All American). Even Milk and Honey, which is about Israel, is about Americans abroad. It feels like a series of landscape paintings.”

This is not Viertel’s first stab at “putting it together.” He assembled a Harlem musical cavalcade for City Center called Cotton Club Parade, which went to Broadway as After Midnight, and his composite of 50 years of Broadway revues, Stairway to Paradise, was bound for Broadway—until Kristin Chenoweth got a television series.

For this project, he functions more as editor than writer, trimming sections of the existing books “so we can get to the number in a hurry,” but he does have musical-theater cred and credits—notably, a musical version of Jack Finney’s time-traveling yarn, Time and Again—and he’ll be ringside February 12 at Feinstein’s/54 Below when some of that score is reprised during We’ll Do It Again: The Songs of Skip Kennon.

What writing there is in Hey, Look Me Over! is Martin’s doing. “Jack programmed the evening, then he and director Marc Bruni worked out the order,” he explained. “They gave me the songs and shows, and I wrote all the interstitial Man in Chair material. Our conceit is that Man in Chair is an Encores! subscriber—and a disgruntled one because many of the shows he loves were excluded the first 25 years of Encores!, so, after an angry-letter writing campaign, Jack allows him to create his own night.”

These Man in Chair valentines will come without his usual arcane stats. “Mainly, it’s his personal connection with each show.” The nerdy look is intact, though. “They actually found the same sweater and corduroys, and it all still fits. I’m wearing ‘em.

“This is so nice to slip into him again. It’s been almost 12 years since Drowsy. I tell people this Man in Chair is really in the wilds. You see him outside his apartment in the real world, in front of real people, not the imagined people in his apartment.”

Not only is Man in Chair making his Encores! debut, so too is Martin, but there’s a more startling newbie in the show. If you’ve wondered how Reed Birney could follow 1984, the answer appears to be in the Ray Bolger role of All American. “I think he’s literally one of the best actors working today,” opts Martin. “This is his first time doing musical comedy, and he’s doing it in front of 2,400 people at City Center.”

Birney, who has a history of heavy-duty dramas and a Tony to go with it, credits this bizarre change of pace to Jay Binder, who has cast all 25 years of Encores and is the secret of many of its successes: “I ran into Jay in an elevator. That’s how these things happen. He said, ‘I’ve heard you sing.’ I’ve had to sing little bits, like in The Humans, so he sorta sussed out that I sang, and he said, ‘We should have you do an Encores! We’re doing How To Succeed in a couple of years, and you’d be amazing as Mr. Biggley.’ I thought, ‘It’ll never happen.’ Then, two weeks later, he called about this.”

The other Tony winner in the cast, Bebe Neuwirth, owes her second one to Encores! where she originated Chicago and took it to Broadway. It’s still at the Ambassador, more than 2,020 performances later—Broadway’s all-time longest-running revival.

She’s doing more Stritching in this revue: “I have two songs from Sail Away playing the Elaine Stritch role. In 1995, I did Elaine Stritch’s ‘Zip’ in Pal Joey for Encores!”

For a fitting finale, On the Town’s Clyde Alves is going to town as George M! and giving his warmest personal regards to Broadway in hopes of a future revival.

“Certainly, Man in Chair views all these musical samplings as Encores! auditions,” Martin admitted. “He wants to frustrate the audience into wanting the whole show.”

Viertel insisted that’s not necessary. “These are shows we’ve often talked about doing but just haven’t gotten around to yet,” he said. “They’ll always be on the list. We’re only 25 years old. We’ve only done 75 shows. As much as anything else, it’s a way of saying to ourselves and to our audience that there are still lots of shows out there.” 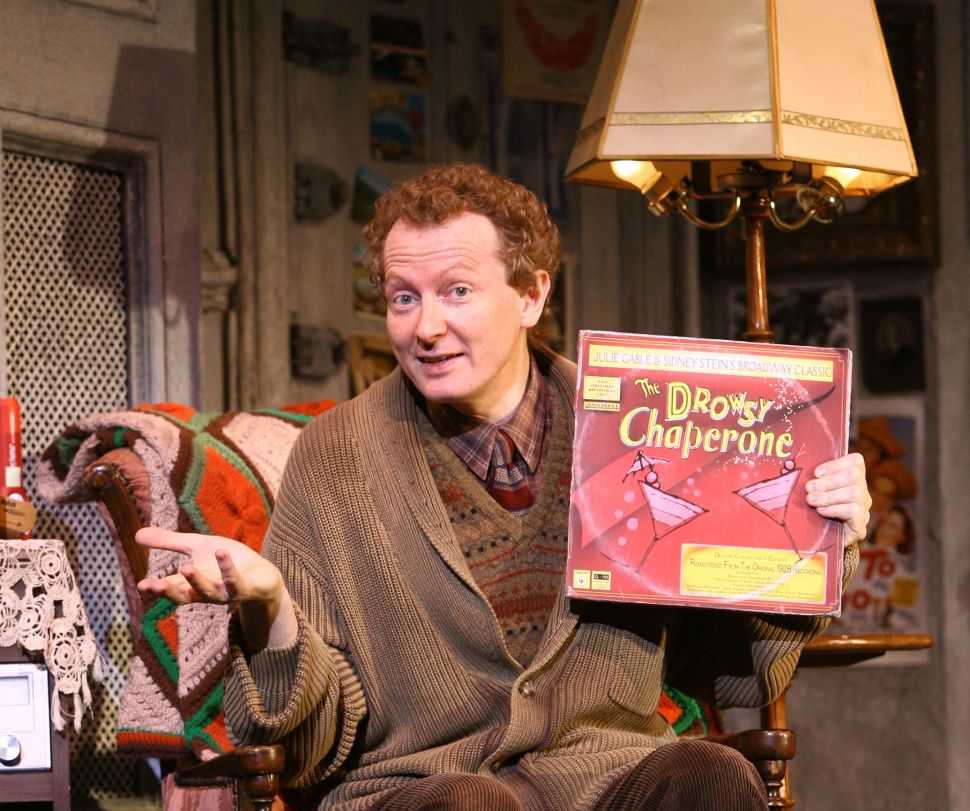