For the first time in a generation, a Democratic governor and a Democratic state legislature will be joined by two United States senators who have bonded together in friendship during a difficult time.

Last year, while most reporters focused on the antics of the motion and trial practice in the Federal District Court in Newark and others were focused on the New Jersey gubernatorial election, few were watching the teamwork between the two New Jersey Senators in Washington. Even among some of Menendez’s strongest supporters, the passionate and personal words Senator Cory Booker delivered in the press and on the witness stand might have been a surprise.

The two New Jersey senators have similar backgrounds. Both grew up as blue collar New Jersians, both advanced through the rough and tumble world of New Jersey politics to become urban mayors and both have experienced firsthand the wrenching stories of working families struggling to make ends meet.

America has witnessed the character and courage of two United States senators who are not as concerned about polls as they are about doing the right thing. Both senators fight for their beliefs even when the political consultants might counsel otherwise. When it comes to the core value that every American should have the tools to achieve the American dream, Bob Menendez and Cory Booker are uncompromising.

At a time when the President of the United States has challenged fundamental fairness and so clearly undermined the belief that every American can achieve the American dream, it is in the hands of Governor Phil Murphy, the New Jersey state legislature and the New Jersey congressional delegation to keep the dream alive.

Even those who disagree with Menendez’s ideology and politics admired his tenacity, grace and focus on continuing to do his job while he was the target of the politically weaponized United States Attorney’s office.

Those who followed the unjust case spoke out and stood at the senator’s side. His colleagues in the Senate, including Republicans like Senator Lindsey Graham and key Democratic senators came to Newark to either testify on his behalf or lend their support through their presence at the trial.

Sen. Menendez is respected in Washington, in large part because his status as a senior senator is the result of years of public service. He got his start as mayor of his home town of Union City and served in the New Jersey Assembly before being elected to the U.S. House of Representatives in 1992. Since being elected to the U.S. Senate, he has quietly worked his way up and expanded his influence among members of his party and colleagues across the aisle.

Menendez Returns as a Moderating Voice in Washington

Now that the Department of Justice has finally dropped its case, Menendez is returning to his post as the top Democrat on the powerful Senate Foreign Relations Committee.

“I am honored to resume my position as Ranking Member of the Senate Foreign Relations Committee,” Menendez said in a written statement. “Now more than ever, it is critical that the United States remains fully engaged across the globe and that we project the principles of our democratic ideals as we confront the emerging threats and demands we face under the Trump administration.”

Menendez is among the nation’s strongest supporters of the State of Israel, freedom and human rights around the world. He had the courage to oppose President Obama’s Iran deal, as well as his attempt to open relations with Fidel Castro’s Cuban regime. He talks as tough as the most conservative Republican about the atrocities in Syria, North, Korea and Russia.

Menendez is also slated to play a key role in resolving DACA. He was a member of the original “Gang of Eight” that brought about comprehensive immigration reform in 2013. Now, he is again part of a key group of congressional leaders, dubbed the “Gang of Six,” who are working across the aisle to find a mutually acceptable resolution. 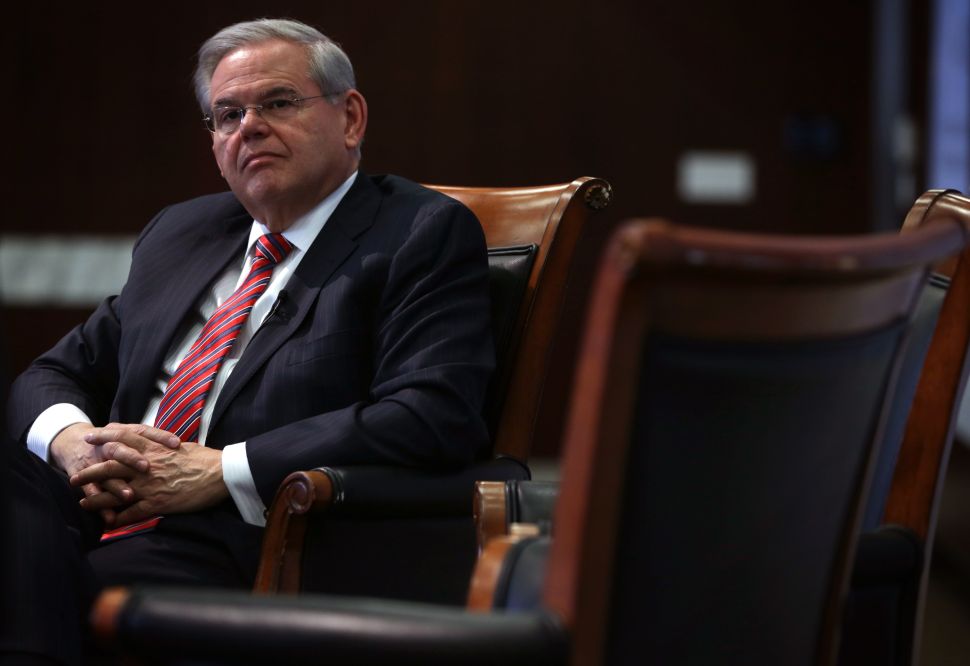