Every Olympics has its share of controversies, and the 2018 Winter Games has been one for the books, with numerous incidents all surrounding one question: what constitutes cheating? Before the Games opened even opened it was a topic of conversation, as the I.O.C. banned Russia and many of its leading athletes for participating in a state sponsored doping scheme in 2014. Still, the I.O.C. invited a large contingent of individually clean Russian athletes nominally to compete under the Olympic flag.

Yesterday, the World’s highest Court of Sport forced the Russian mixed-doubles curling team to forfeit their 2018 bronze medal and called for the indefinite suspension of the Russian male curler, Aleksandr Krushelnitckii after he failed a drug test for meldonium. The I.O.C. will decide tomorrow whether Russian athletes will be allowed to march under their own flag at the closing ceremony. In either case, the dispute over proportional punishment for cheating hardly seems settled.

Another controversy emerging from the games themselves has tested concepts of cheating, fairness, and the proper measurement of excellence, bequeathing other problems for future governing boards to resolve.

“Clothes make the man,” goes that old cliché. But when it comes to athletic competition, should that be so? In 2008 swimmers who debuted Speedo’s newly designed whole-body LZR suit made quite a splash—by making very little at all. Working with NASA, an agency long concerned with decreasing friction, Speedo substituted polyurethane membranes with ultrasonic welded seams for the more traditional stitched lycra. These new suits minimized drag by as much as 38 percent, maximizing support to the muscles without constraining movement. Within a month of its release, swimmers wearing the LZR broke 13 world records. At the 2008 Beijing summer Olympics a few months later, 98 percent of medal-winners wore the LZR Racer; 23 of 25 world records were broken with it.

Critics claimed the suit amounted to “technological doping”—that the suit acted more like a “device” that only the wealthy could afford. The unfairness lay not only in the advantage it conferred on those who used it, but also in the unjust equalizing effect it had, diminishing, if not eliminating, an earned advantage of the better conditioned athlete. Squeezed into these corsets—“full body condoms” some critics called them—a flabby body became as streamlined as a lean one.

The unfair advantage that the suit conferred proved too much. F.I.N.A., the governing body of aquatic sport, had initially approved the suits, then banned them after the 2008 Olympics, requiring swimmers to wear less and show more skin. Many great swimmers, including Michael Phelps, approved the ban. That has left unanswered questions of whether to count the 2008-2009 “rocket suit” era records or attach an asterisk to them. The suit not only conferred an advantage to those who wore them over those who didn’t and eliminated advantages of the better body, but it also distorted comparisons of past, present, and future greatness.

And yet even as an athlete’s technique and training improves, so too does technology advance.

Fast forward. In these 2018 Winter games, the British skeleton racers debuted technologically superior custom-made body suits that reduced wind resistance. In skeleton racing, a thousandth of a second can make all the difference. Wearing these new, superior suits, Lizzy Yarnold won the gold for Great Britain in the skeleton. But she had also won gold in 2014, becoming the first skeleton athlete to win successive Winter Games golds. So perhaps the suit made no difference. Laura Deas, however, has just won the bronze, having performed poorly at the last World Championships without the suits.

Then there’s Dom Parsons of Great Britain, a 100-1 long shot until an article appeared in the Guardian, announcing and detailing the advantages of the new British suit. Wearing that suit, Parsons had set a track record in his first and second preliminary runs and went on to win the bronze in the men’s singles. While Parsons celebrated, Zintis Ekmanis, the coach of Martins Dukurs—a five time world champion and one of the greatest sliders in history, who had finished fourth behind Parsons by 0.11 second—expressed doubts about whether the Brit had earned the bronze medal fairly: “You see that the rider’s start was less than our guy’s, and in general his driver skills are less than us.” Without the suit could Parsons have gone from being ranked 12th in the world to winning the bronze? The new suit was “killing the sport,” the coach insisted.

Rule 10.16.3 of the International Laws of Skeleton states: “No elements whatsoever may be attached either outside or under the race suit,” (emphasis added). But the Brits, who ironically have taken over the testing of Russian athletes for doping, built snowflake-like ridges into the suits, without placing anything on or under them.

So have they cheated?

It depends upon your definition of cheating. A leading philosopher of sport, J.S. Russell, insists that as a concept, cheating can never be defined and ought to be dispensed with. Some of us would disagree: An athlete cheats when he or she deceptively attempts to gain an unfair advantage by violating the rules.

By that definition perhaps, Great Britain did not cheat: they literally complied with the letter of the law, but certainly undermined the spirit of the game.  So perhaps we could substitute a better definition: A person cheats who deceptively gains an unfair advantage by violating written or unwritten rules, their letter or spirit. But who determines the spirit of the law? And besides, unlike dopers, the British racers had not been deceptive. They openly wore their suits with the snowflake pattern on one shoulder showing. In fact they drew attention to them, perhaps to gain a psychological edge. The chief executive of the U.S. Bobsled and Skeleton team, Darrin Steele, called “the timing of the Guardian article” which revealed the advantage in advance of the medal competition a “perfect and smart strategic move by the British team.”

Putting doubt in the minds of opponents to distract them from the physical challenge…is that cheating, Or gamesmanship?

There is, certainly, a boundary between the two. Athletes who engage in gamesmanship get an edge by finding and exploiting loopholes in written rules, or creating and exploiting psychological doubts that undermine a focus on the core physical skills the sport was meant to test.

And good gamesmanship can of course be bad sportsmanship.

Sportsmanship seems to require deliberately choosing to not take advantage of the rules, in order to preserve the fairness of the contest itself. By that measure, great athletes might choose not to wear superior gear if that distorts the essential contest. Lindsay Vonn, our celebrated ski champion, said she deliberately went slower in preliminary runs to give opponents a false sense of confidence. Good gamesmanship, bad sportsmanship? In these winter sports it may all be a sliding scale.

Whether or not the authorities do nothing, ultimately ban the British suit, or instead make it equally accessible to all, the challenge to determine clear boundaries between gamesmanship, sportsmanship, and cheating remains, as perhaps it must, a legacy of this and all Olympic contests. 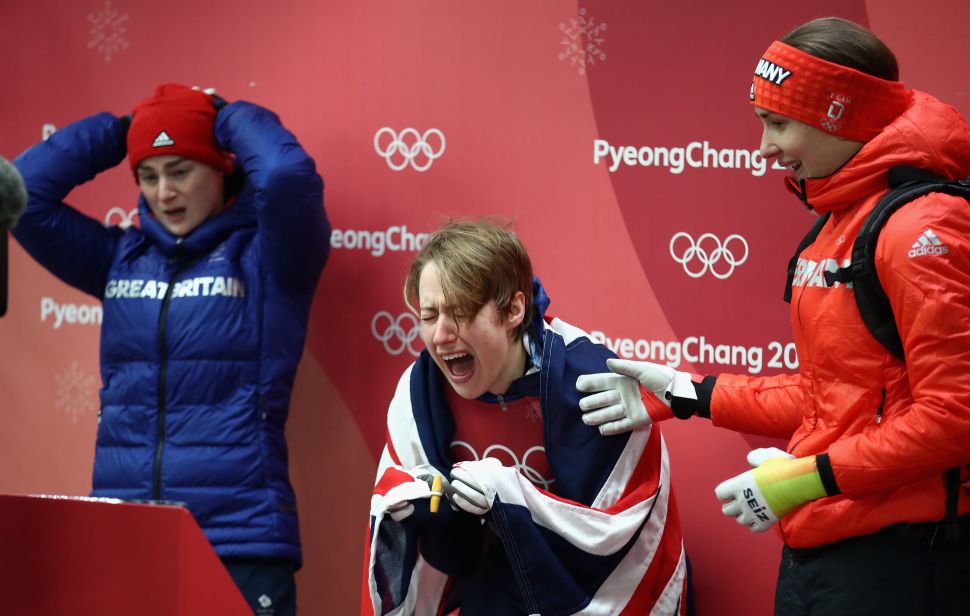