Controversy follows Tucker Carlson wherever he goes. He’s often been accused of spewing “flat out racist” immigration rants on his Fox News show.

But on rare occasions, Carlson’s invective can lead viewers to interesting insights.

Case in point: in his final segment on last night’s show, Carlson railed against airports that play CNN in their waiting areas.

“Everyone’s watching CNN,” he said. “They don’t have a choice.”

Carlson, a former CNN host himself, said the decision “may have made sense 20 years ago, when CNN had a centrist reputation.”

But now, he contends, the channel is simply home to “wacky Russia conspiracy theories” and “strange spiritual advice from philosopher-poet Chris Cuomo.”

“Airports feel like a lesser version of hell with dirty seats, overpriced food and propaganda posing as news on CNN,” Carlson said.

Well, it turns out CNN pays 47 airports to air its channel. It also reimburses them for the televisions, cable connections and maintenance.

And CNN doesn’t skimp. Carlson said the network pays Miami International Airport $150,000 a year to play on its TVs.

This may have been news to Carlson, but CNN Airport (as the terminal service is called) has actually been around since 1992.

Sports are also a much bigger part of CNN Airport than the regular channel. The service broadcasts full-length NFL, NBA, MLB and NCAA men’s basketball games and tournaments.

Like its Atlanta-based parent, CNN Airport broadcasts 24 hours a day, seven days a week. But since it caters to travelers, it doesn’t show graphic, sexually explicit or violent videos.

But of course, Carlson didn’t include any of that detail. He ended the show by playing the whole thing off as a joke with his fellow co-host Sean Hannity.

“You can’t pay me to watch CNN,” Hannity declared.

Classic Fox News: getting this close to an insight before pivoting to jokes about fake news. 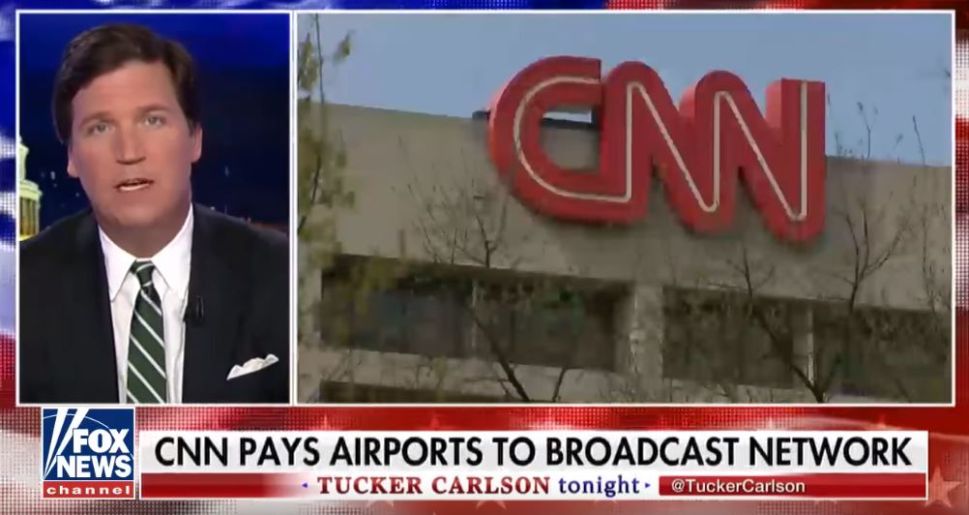