Today the Court of Arbitration of Sport (C.A.S.) rejected the appeal of 45 tainted Russian athletes and two coaches, whom the International Olympic Committee (I.O.C.) had already banished from these Olympics, to be allowed participate in the PyeongChang games. Their crime: participating in the most sophisticated, organized doping operation in history. Speculation had surrounded the high court’s decision, as they had already reversed the I.O.C.’s decision to strip Russian athletes of their ill-gotten medals won in Sochi in 2014, and overturned the I.O.C.’s lifetime ban of the worst offenders.

This cheating scandal involved more than individual athletes and their coaches. Russian scientists developed a technology to tamper with tamper-proof bottles; ranking members of the Russian Ministry of Sport controlled and corrupted the Olympic testing laboratory, swapping clean samples for dirty ones under the supervision of Russian intelligence agents.

Largely on the basis of two detailed investigations led by Richard McLaren, a prominent Canadian lawyer, the International Olympic Committee (I.O.C.) stripped dirty Russian athletes of their medals “won” in the 2014 Sochi Olympics.

The I.O.C. went beyond that and declared the guilt collective. After its own investigations confirmed what the McLaren Report found, the I.O.C. banned Russia from the 2018 Olympics. The Russian flag would not fly, its anthem would not play, its athletes would not compete. Russia, the nation, would be punished. While much of the West cried “At last!” Vladimir Putin, the Russian President cried foul: Guilt and punishment should be individual, he insisted. A nation should not be punished—its entire team banned for the sins of a few.

Collective responsibility and collective punishment has long been controversial. Under the Geneva Conventions, it’s a war crime. Opponents claim that a collective can never cause harm and thus should never bear moral responsibility. Only individual human beings can act; only individual persons can deserve punishment. But we routinely credit and praise a group, proponents of collective guilt counter, separate from the individuals who compose it: The Philadelphia Eagles won the Super Bowl; the Patriots won several. If we can credit and celebrate one collective, why can’t we blame and punish another?

The I.O.C. banished Russia, the nation, separately and apart from the athletes who competed under its flag. And Russia has not challenged that decision before the C.A.S.

When it banned Russia this past December, the I.O.C. initially imposed collective punishment on every Russian athlete, clean and dirty, whether or not they actively participated in the doping scheme or even passively tolerated it. That collective guilt—punishing every would-be member of a group without regard to his or her individual involvement in the group’s actions and conduct—obviously deeply troubled the I.O.C. Thus, they left open the possibility that some individual exceptions might be made. While all Russian athletes would be presumptively excluded from the Games, the I.O.C. reserved the right to invite individual Russian athletes to prove they were clean, and thereafter allow them to compete as neutrals—designated as Olympic Athletes from Russia (O.A.R.).

As it turned out, the I.O.C. has “invited” 169 Russian athletes to compete with that odd quasi-national status. They make up a delegation nearly the size Russia sent to the 2010 Winter Olympics. But the I.O.C. exercised its discretion not to invite or allow dozens of other Russian athletes, actually or apparently implicated, including gold medal winners. Those non-invited athletes appealed their exclusion. Last night the Court for Arbitration of Sport (C.A.S.) dismissed the appeal.

This run-up to the 2018 winter Olympics has demonstrated the deep connection between sport and law. In Sport, itself, lies the foundations of democracy—individual equality under the law, and legal contests subject to honest judging and public scrutiny. “By staging an open and fair competition,” Heather Reid argues in Athletics and Philosophy in the Ancient World, the ancient Olympians “pursued truth by means of an impartial test.” From the very start, Reid points out, “as in democracy, the rules of sport should be publicly known and applied equally to all.”

The voluntary acceptance of rules, has, from the beginning, been fundamental to fair sport and democracy. And so a community feels bound by a common “respect for the game,” as Angela Schneider, Olympic silver medalist and leading philosopher of sport has termed it. In short, we collectively stand committed to an equal opportunity to honestly demonstrate individual and team excellence—equality under rules, judged or refereed by honest arbiters sworn to uphold the standards of the sport. Sport, like democracy, Schneider says, “creates a sense of collective responsibility” and “should produce a kind of collective authority.”

And so it had, apparently.

The I.O.C., World Anti-Doping Agency (W.A.D.A.) and of course the Court of Arbitration of Sport largely constitute that “collective authority.” But this collective authority has now split into warring camps. “Play True” rings the motto of W.A.D.A., who urged the punishment of the tainted Russian athletes. “Not proven,” the world’s highest court of sport effectively countered when it recently restored the medals to 28 tainted Sochi Russian athletes and overturned their lifetime banishment. “Extremely disappointing” I.O.C. President Bach called the High Court’s decision. Of course, Russian sports officials celebrated the ruling, saying the accused had been “exonerated”—claiming justice had been done in “restoring their good name,” only further highlighting the ambiguity of “not guilty”—which can mean innocent, but more commonly “not proven.”

W.A.D.A. obviously saw it differently, issuing a release on February 6 expressing “profound disappointment and dismay” at C.A.S.’s decision to reinstate the medals. “We share the distress, uncertainty and frustration expressed by many athletes.” And they virtually accused the highest court of sport of bias and succumbing to pressure, calling upon it to “improve and strengthen its independence” and “strive to increase the quality of its arbitrators.” In advance of last night’s decision, the W.A.D.A. Athlete Committee reminded C.A.S. not to “lose sight of the extent nor the scale of the efforts that Russian authorities and athlete engaged in to cheat the anti-doping system.”

So it has become a contest of W.A.D.A. and the I.O.C. against the C.A.S. Had the I.O.C. adhered, as it professed, to the natural fundamentals of due process? It had rejected the classic presumption of innocence and Constitutional requirement of guilt and punishment only upon proof beyond a reasonable doubt. Had they, as they insisted, issued punishment proportional to the transgressions? Does the punishment—denouncing and banishing Russia and many of its star athletes from the 2018 Olympics—fit their crime?

The answer should depend on the purposes and justification of punishment itself: Retribution, deterrence, rehabilitation, incapacitation and denunciation.

Retributivists look to the past: The past counts. Retributivists would impose pain and suffering on offenders because they deserve it, but only to the extent that they deserve it. They stand committed to punish no more, but no less, than justice demands. So what does justice demand if these athletes were acting under duress from Russian officials? Clearly returning medals to athletes who “won” by cheating prevents other athletes from getting their just deserts—their time to hang a gold, silver or bronze around their neck, to watch their country’s flag rise and national anthem play.

Deterrence advocates look to the future. They assume the world watches this controversy, and that future would-be dopers will engage in a cost benefit calculation: Is it worth it to cheat to get an edge, and try to get away with it? Selfish, rational, calculating competitors with no moral allegiance to fair competition will ask only, “What’s likely to happen to me? Is it worth risking the punishment to get the benefits from the crime?” Deterrence advocates would make an example of the Russian cheats, so others in the future, tempted to dope, will instead feel pressured into staying clean. What has the fate of these cheaters taught them? That you can get an illegal edge, get away with it, and win. Or if you get caught, have your medals restored. Deterrence failed miserably here and, as W.A.D.A. recognized, undermines the integrity of sport.

Fans of rehabilitation will hope the punishment gives the punished new values so they will emerge as productive members of the international sporting community—as athletes or coaches. Perhaps they will feel remorse. It’s difficult to separate regret from remorse, but real remorse requires putting yourself in the shoes of the victim. Have these doping athletes ever felt real pain at the real costs they imposed on the victims?

“At least those banned can’t dope if they can’t compete” fans of incapacitation declare. But in fact, the Russian government has subjected their current athletes to British and other outside scrutiny; their would-be cheats have, for these Games, largely been incapacitated.

And finally, that last justification for punishment: Denunciation. Explored by the great sociologist Emile Durkheim, denunciation acts as a kind of social cement. It solidifies the community spirit, where rule-abiding athletes, from world champions to also rans, can equally feel superior to cheats and rightly take their place in the community of honest competitors.

So does the punishment of excluding these athletes fit their crime?

The Court for Arbitration of Sport ducked the whole question and diluted the message with a straight face. They simply held that the I.O.C.’s decision not to “invite” these tainted athletes “could not be described as a sanction but rather as an eligibility decision.” Being invited was a privilege and the I.O.C.’s prerogative. Being excluded was no punishment.

At least Russia, the nation, stands denounced by the I.O.C. But while its flag does not fly, nor its anthem play, has it really been adequately punished? Although the country’s athletes have been designated “neutrals,” or Olympic Athletes of Russia, I’ll bet, when the history of these Olympics has been written, “Russia” will become the designated category under which its medal winners are counted. “A desperate and dark day for sport, with cheats and thieves allowed to triumph,” the BBC quotes British I.O.C. member Adam Pengilly. As Russia fields the third largest team, the wry realism of another Brit comes to mind: “Great robbers punish little ones,” John Locke declared more than 300 years ago, “but the great ones are rewarded with laurels and triumphs.” 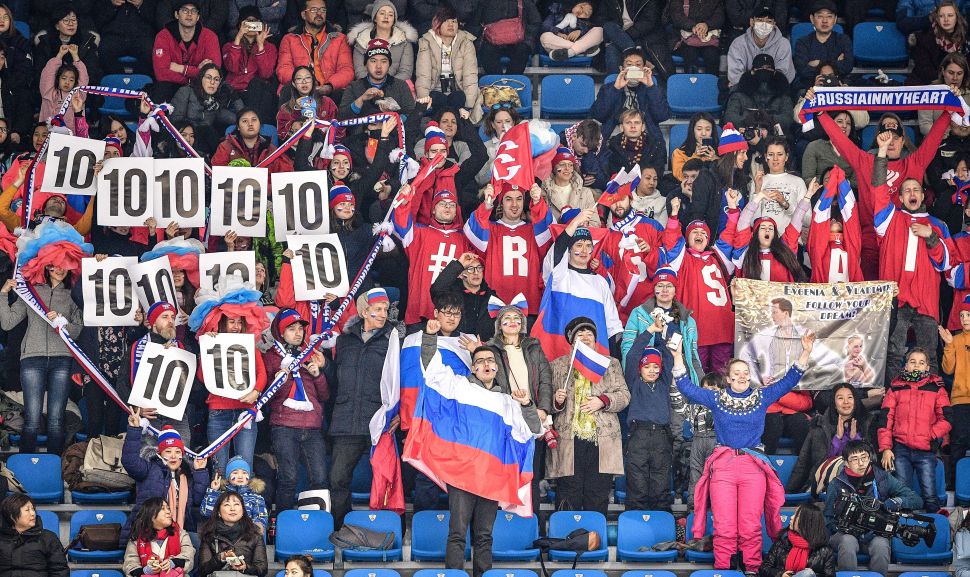