The official portraits of former president Barack Obama and first lady Michelle were unveiled at the Smithsonian National Portrait Gallery in Washington, D.C. on Monday. Rarely do presidential portraits generate such a frenzy of media attention, but the art world has been waiting with bated breath since October when it was announced that Obama had selected the high-profile painter Kehinde Wiley to capture his likeness, while Michelle opted for rising star Amy Sherald. Now that the works are finally on view, it’s Sherald’s painting that is garnering the most attention.

Wiley, 40, is renowned for his oversized portraits of black subjects—especially black men—in poses reminiscent of historical European tableaux of once illustrious white men such as kings, emperors and generals. Often depicted against richly detailed, decoratively florid backgrounds, the artist’s depiction of the 44th president is no exception. A seated Obama leans forward in an ornate wooden chair amidst a lush background dotted with flowers that tell of his background: blue lilies for Kenya where his father hails from, jasmine for Hawaii where he grew up, and chrysanthemums for Chicago where he cut his political teeth.

According to New York Times senior critic Holland Cotter, the floral storytelling sets Wiley’s apart from previous presidential portraits. “At some level, all portraits are propaganda, political or personal,” he wrote in his review. “And what makes this one distinctive is the personal part. Mr. Wiley has set Mr. Obama against—really embedded him in—a bower of what looks like ground cover.”

Cotter is a little less laudatory of Sherald’s portrait of Michelle, claiming that the dress the artist painstakingly rendered the first lady in is more the subject of the painting than the first lady herself. “Mrs. Obama’s face forms the composition’s peak, but could be almost anyone’s face, like a model’s face in a fashion spread. To be honest, I was anticipating—hoping for—a bolder, more incisive image of the strong-voiced person I imagine this former first lady to be,” Cotter said.

Like Wiley, Sherald was known for her portraits of African-American subjects, often rendered in flat black and white against backgrounds of pure, bold color. The 44-year-old Baltimore-based artist, who received the High Museum of Art’s David C. Driskell prize just last week and was the first woman to win the National Portrait Gallery’s Outwin Boochever Portrait Competition in 2016, chose to represent Michelle Obama in a seated stance, also bent forward like President Obama’s in Wiley’s work, against a robin’s egg blue background. The skirt of her gown, a design by Michelle Smith for her fashion label Milly, grabs the viewer’s eye with its bold geometric forms and large presence on the canvas.

It’s untoward to undermine the importance of the dress in Sherald’s painting as Cotter did since, as Philip Kennicott of The Washington Post astutely points out, Sherald’s rendering of the skirt addresses some of the issues she faced while in the White House. “The dress forms a pyramid, with the face atop, in a way that suggests a protective carapace, hiding from view the first lady’s body and some of her femininity, which were targets of racist attack during her tenure in the East Wing,” he said in his review.

Perhaps even more importantly, it’s worth noting that fashion was one of the many ways Michelle Obama made bold statements during her tenure as first lady, often blending couture and average department store brands. As Vanessa Friedman of the The New York Times said in a recent essay on Michelle’s wardrobe, she “set in motion a strategic rethink about the use of clothes that not only helped define her tenure as first lady, but also started a conversation that went far beyond the label or look that she wore…her real contribution went far beyond giving women a license to like clothes and use them to celebrate their own strength and femininity.”

Wiley and Sherald represent the first African-American artists commissioned by the National Gallery to paint presidential portraits. The former first family’s artistic selections continued a tradition they established while in the White House of supporting modern to contemporary African-American artists, evidenced in the works by artists such as Alma Thomas and Glen Ligon they had on display when they were in residence. Moreover, the portraits propel a growing trend in the art world of figurative painting addressing gender, race and identity issues in America today.

Indeed, it will take social and political historians decades to unpack the Obama legacy and the particularities of an American identity it raised writ large. But as The Atlantic’s Kriston Capps said, “The former First Family picked these artists to do the job in single strokes. They were the right artists to ask. On top of their contributions to the hall of presidents, Wiley and Sherald advanced the conversation about black art and portraiture with their paintings of the Obamas.”

The first presidential portrait commissioned by the National Gallery was of George H.W. Bush as depicted by in 1994; the initial first lady commission, a portrait of Hillary Clinton, was in 2006. President Obama’s portrait will be installed in the museum’s “American Presidents” gallery, while Michelle’s will be on display in another gallery until November among other recent acquisitions. 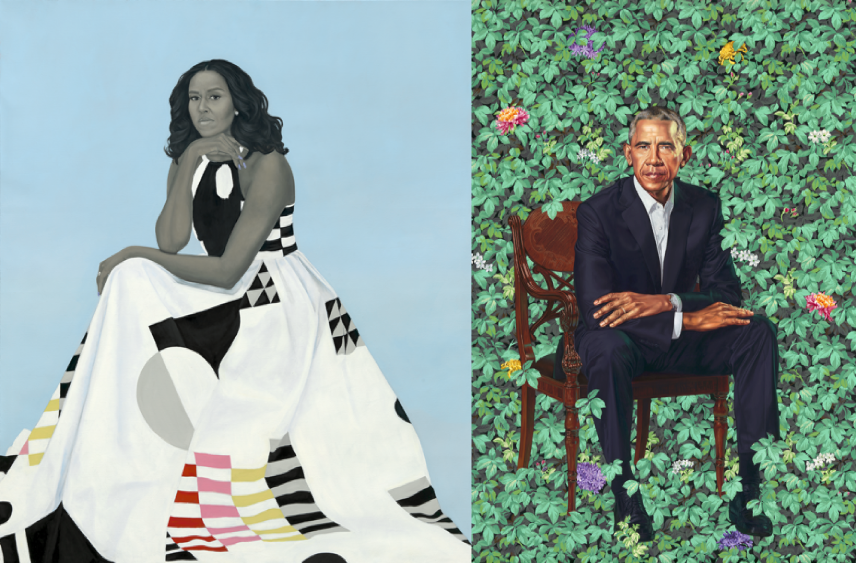