Actress and education activist Cynthia Nixon—who is considering challenging New York Gov. Andrew Cuomo in the 2018 gubernatorial race—says New York needs “bluer Democrats,” seeming to indicate she is getting closer to making a decision about a potential political campaign.

Last month, Nixon said she might challenge Cuomo, when asked by NY1 at a fundraiser she was co-hosting with a feminist collective, whose directors include Mayor Bill de Blasio’s finance director and the communications director for his reelection campaign. Nixon is a close ally of de Blasio, who often feuds with the governor.

At the Human Rights Campaign’s Greater New York gala on Saturday night, Nixon—an Upper West Side resident who has gained prominence for her advocacy on education issues—did not formally announce a gubernatorial bid but seemed to lay out a potential campaign platform.

During her 12-minute speech, Nixon argued that if Democrats want to take back the House and the Senate, as well as some statehouses this year, the party has to be “more than the anti-Trump party.”

“Ignoring this economic crisis is what got us Donald Trump in the first place,” she said. “It can’t just be business as usual anymore. So in 2018, we don’t just need to elect more Democrats. We also need better Democrats. We need bluer Democrats. Small donor Democrats.”

Although she did not mention Cuomo by name, she appeared to be making an assessment of his work as governor. She also seemed to be taking jabs at the state Senate’s Independent Democratic Conference, a group of Democrats in a power-sharing arrangement with the Senate GOP.

She expressed frustration over lack of progress on passage of a bipartisan DREAM Act in Congress and the Gender Expression Non-Discrimination Act (GENDA), which prohibits discrimination based on gender identity or expression.

And she pointed to the adverse impact of Trump’s tax plan on New Yorkers and blasted Cuomo over the subway crisis.

The governor and the mayor have been sparring over who should fund an $836 million short-term plan proposed by Metropolitan Transportation Authority (MTA) Chairman Joe Lhota in July and whether the city should include funding for the MTA in its fiscal year 2019 preliminary budget.

“If we had bluer Democrats, we could take the windfall that Trump is giving to the richest New Yorkers and use it to correct the disparities in housing, health care and education,” she added. “We could invest in renewable energy. We could transform our criminal justice system. We could fix our broken subways. But we won’t get better bluer Democrats until we wrest our political system back from the gigantic corporate interests and billionaire donors who are holding it hostage.”

Spokespeople for Cuomo and the IDC did not immediately respond to requests for comment on Sunday.

Earlier in the evening, Cuomo had his own lessons to offer Democrats, saying that they have to oppose Washington’s “drive to reverse our progress.”

“The Democrats in Washington must join forces, and they must stop the administration’s attempts at reversals by any means possible,” he said. “We cannot, we cannot let them impose their will and their vision on this country and whatever the Democrats have to do—stand up, speak up, lay down, shut down—I don’t care.”

Cuomo, who signed legislation legalizing same-sex marriage in New York into law in 2011, announced that he would sign an executive order prohibiting state agencies and authorities from doing business with companies that encourage or tolerate discrimination.

And he maintained that schools that do not protect transgender students “will not receive a penny of state money,” and committed to redoubling the state’s efforts to meet his goal of ending the HIV/AIDS epidemic by 2020.

“We must demonstrate the alternative path, the true American way,” Cuomo continued. “That’s where New York comes in. Every great progressive movement started in New York, he says as an arrogant New Yorker.”

Ex-State Senator Terry Gipson is the only Democrat who has launched a bid against Cuomo. Former Syracuse Mayor Stephanie Miner is currently mulling a bid. 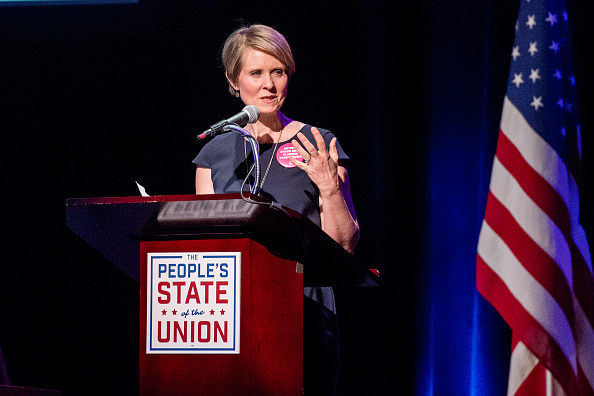