Mayor Bill de Blasio met with Gov. Andrew Cuomo in Albany on Monday afternoon to discuss “what really matters to New York City”—including a “lockbox” guarantee on funds from a congestion pricing proposal that will go toward the city’s subways and buses—after a three-hour testimony before the New York State Legislature.

Last week, the mayor unveiled his preliminary fiscal year 2019 budget, which did not include funding for the Metropolitan Transportation Authority (MTA). He said he was not open to increasing the city’s contribution to the MTA “under current circumstances.”

In response, an MTA spokesman said it was a “shame the Mayor continues to show a complete unwillingness to help fix it.”

De Blasio and Cuomo’s meeting on Monday lasted for close to 1.5 hours.

“One of the things I tried to do today was to help the governor understand what really matters to New York City,” he told NY1 political anchor Errol Louis on Monday night. “We’re 43 percent of the state’s population, as I said when I did the budget presentation last week. We’re on our way now to 8.6 million people by the end of this year, as many as nine million people as early as 2030. So what happens in New York City really matters.”

The mayor said he told the governor there are some “bottom line matters” that are “essential” to the city and that he has has been “very open-minded” about the congestion pricing plan proposed by Fix New York City, a panel formed by Cuomo last year to study the issue.

But he pointed to his repeated calls for a “lockbox,” ensuring that funds for the MTA are not diverted.

“I’m someone who had a lot of doubts about congestion pricing, but I said what his commission did was actually a breath of fresh air compared to the previous proposals we had seen,” de Blasio continued. “I said it doesn’t work unless there’s a lockbox—an absolute, binding legal requirement that all the money raised through congestion pricing goes to New York City subways and buses.”

He signaled to Cuomo he would be open to supporting the congestion pricing proposal if that guarantee is included.

“We are the center of the metropolitan region—the MTA, the subways and buses are the center of the economy, of the whole region—and it’s all happening in the five boroughs,” the mayor added. “That’s where the money needs to stay. So if we don’t have that lockbox, it’s very hard to support such a proposal. If we have it, it might be the kind of thing that could actually work for the long haul.”

The governor’s office did not immediately respond to a request for comment on Monday.

During his testimony before the state Senate Finance and Assembly Ways and Means committees, de Blasio maintained his position that the city should not have to pay half of the $836 million short-term subway action plan proposed by MTA Chairman Joe Lhota in July, as stipulated in Cuomo’s executive budget.

And he again touted his proposed millionaires tax on wealthy New Yorkers to finance subway repairs and reduced fares for low-income New Yorkers.

Still, he expressed satisfaction over the removal of East River bridge tolls from the congestion pricing plan, as well as the inclusion of block-the-box enforcement to mitigate gridlock at intersections.

But he urged the legislature to consider a surcharge on for-hire vehicles and an added surcharge on taxis for the MTA. And he outlined some conditions that would have to be met in order for him to support the plan.

“One, a requirement that all proceeds are invested in mass transit projects in the five boroughs only,” he said. “And two, the city of New York needs the ability to sign off on transit projects and priorities. Also, any pricing scheme for passenger vehicles should take the needs of New Yorkers with hardships into account, including low-income New Yorkers and those with disabilities.”

He also took issue with a value capture provision in the executive budget that forms a special property tax district in the city to fund local transit projects. He acknowledged Cuomo characterized it as a choice rather than a mandate but asked the legislature to remove the provision from the budget altogether. And he blasted the budget’s stipulation that the city pay for all capital costs for the New York City Transit Authority (NYCTA).

Lhota has insisted the city has sole approval of the NYCTA Capital Plan above $5 million and that the state has committed $8.6 million to the capital program. 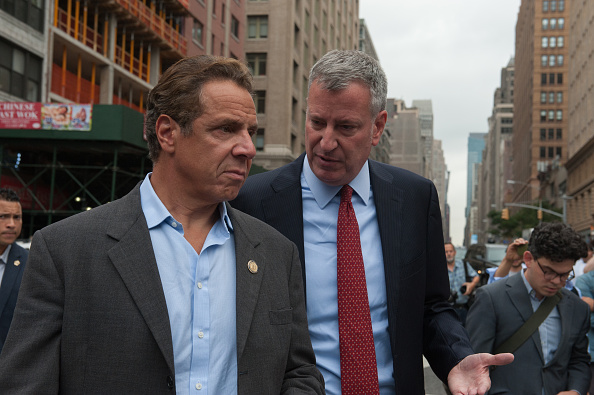