Mayor Bill de Blasio says the best way to disempower the National Rifle Association (NRA) and ensure passage of gun safety legislation is by voting Republican lawmakers out of office, citing a blue wave that is sweeping the nation.

At the Conservative Political Action Conference in Maryland on Thursday morning, NRA CEO Wayne LaPierre took aim at de Blasio, Gov. Andrew Cuomo and other Democrats who he claimed are part of the “tidal wave of new European-style socialists” and accused them of looking to “exploit tragedy for political gain.”

He also blasted the Federal Bureau of Investigation (FBI), calling the leadership “rogue.” The comments come in the aftermath of a school shooting at a Parkland, Florida school.

“We need to change the political leadership of this country and that is not just about the presidency, that’s about flipping the House and the Senate and it’s about changing statehouses as well,” de Blasio told reporters at City Hall. “And I think what you’re going to see in 2018 is more and more focus on the statehouses around this country because as state legislatures change, the districts that members of Congress run in will change and that’s really where the foundation will be for political change that can then lead to real gun safety legislation.”

Indeed, the mayor lambasted the GOP for not holding the NRA accountable.

“The Republican Party is complicit because they don’t stand up to the NRA leadership,” he continued.

Since November 2017, nearly every single election in which a Republican seat was being contested has flipped to a Democrat, the mayor said, pointing to recent victories in Kentucky and Alabama as examples. And he argued the trend is not limited to blue states.

“Something very big is happening,” he added. “I keep telling people there is a bigger progressive movement growing and a bigger progressive era…this country will change literally state legislative seat by state legislative seat. That is the core of making bigger change. I”m gonna put my energy as I can into helping all that along wherever I can be helpful.”

The mayor called for a ban on assault weapons and bump stocks—which nearly convert semiautomatic weapons into automatic weapons—more thorough background checks and prohibiting individuals will mental illness and those on terror watch lists from buying guns.

He put the blame on the NRA and noted law enforcement leaders share the same point of view.

“The leadership of the NRA is responsible for these massacres,” he said. “It’s as plain and simple as that. If you didn’t have this leadership at the NRA, the members of the NRA and elected officials around the country would move forward with sane gun safety legislation. I don’t have a doubt in my mind. If Wayne La Pierre wasn’t in the way, this would be a safer country.”

He was less concerned about LaPierre attacking him and other Democratic leaders and more worried about what he is “doing to this country” and how NRA leaders are endangering individuals—especially children.

“My answer to Wayne LaPierre is you are the one of the people responsible for this massacre and for all the massacres before because your actions, the actions of the NRA leadership, made guns so widely available in this country that even a terrorist could get their hands on guns legally,” the mayor continued.

“Even a person who has severe mental health problems could get their hands on a gun legally,” he added. “Even a young person who has been deeply troubled can walk into a store and legally get a gun. This has been the work of the NRA leadership for decades.

And he sought to make a distinction between the NRA’s membership and the leadership, noting surveys have shown they are open to “sane gun safety legislation.”

“The head of the NRA is trying to attack the FBI and trying to shift blame for the huge number of guns in our society…regardless of what has happened in any one incident, the FBI and other federal law enforcement has saved thousands and thousands of lives by intervening to stop these kind of things,” de Blasio said. 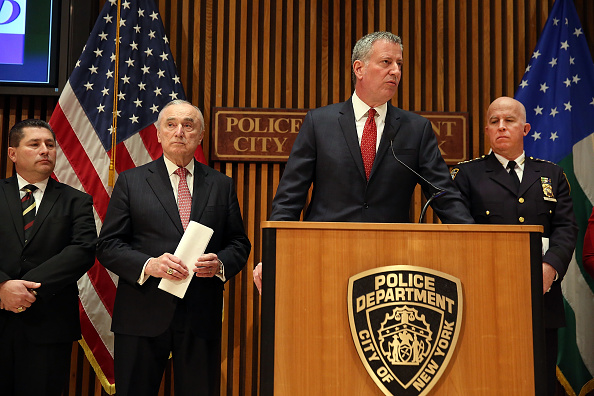