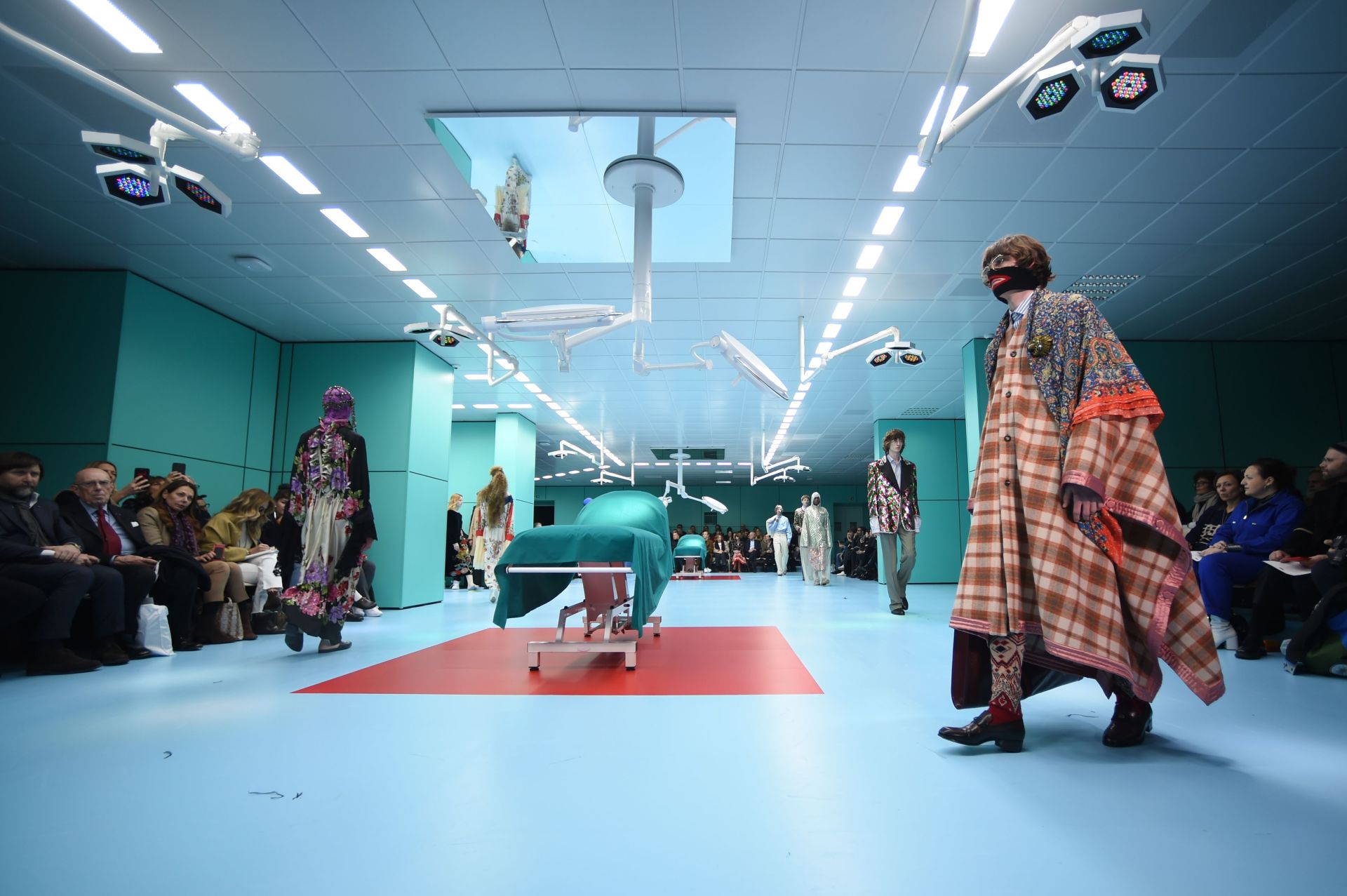 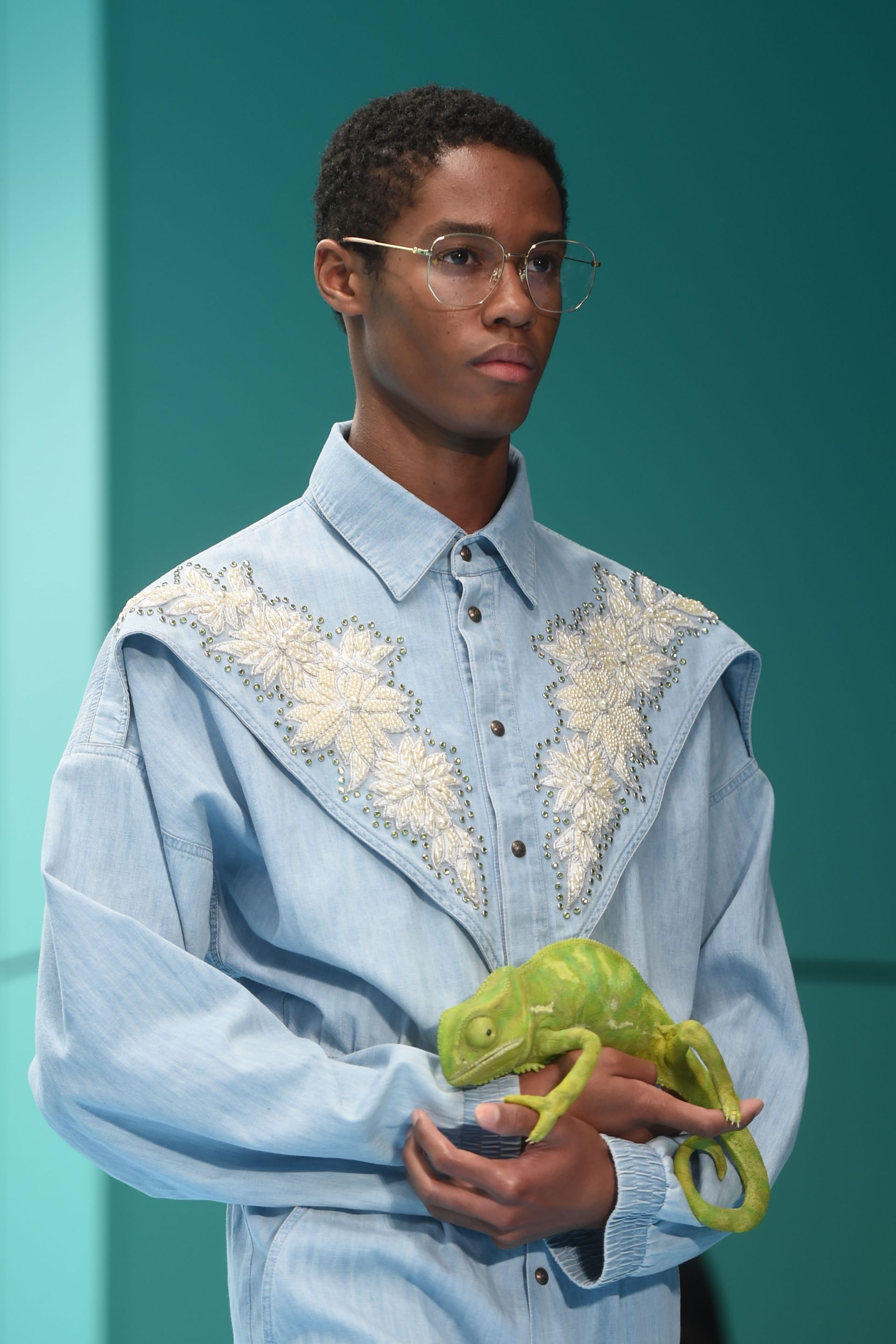 Chameleons are so in for Fall/Winter 2018.
Getty Images 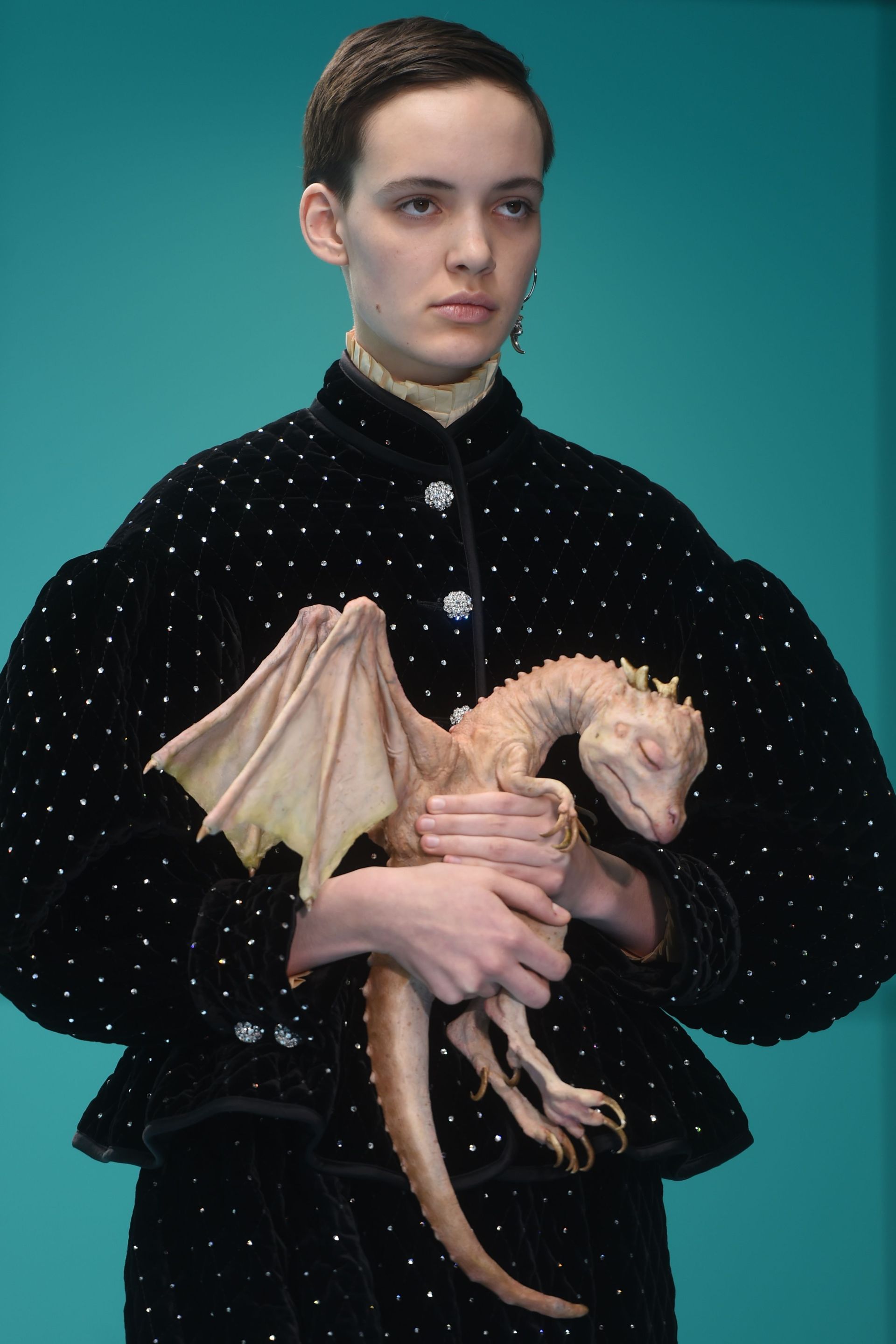 This is, in fact, a baby dragon.
Getty Images 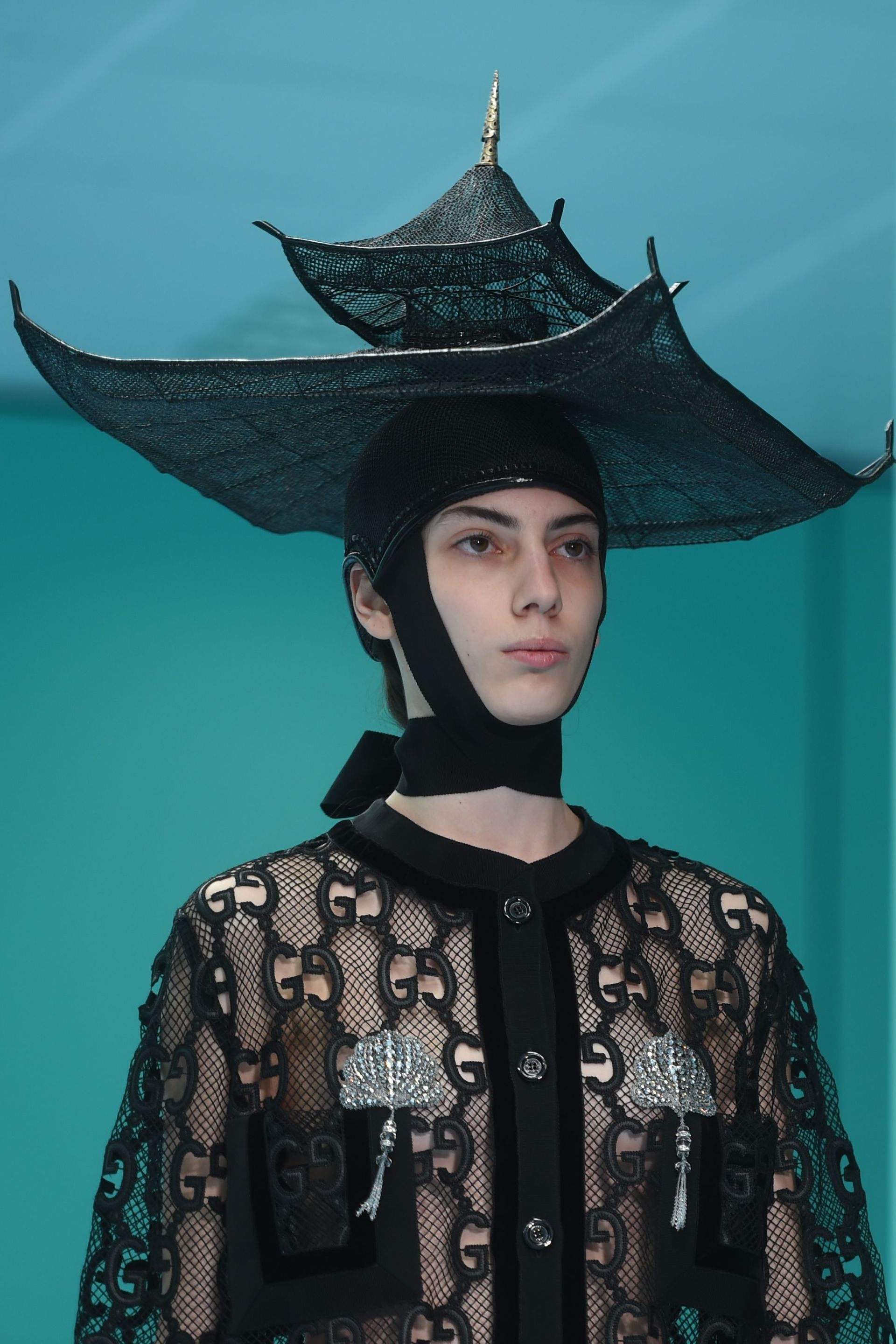 This topper is a nod to classic Asian architecture.
Getty Images
Advertisement 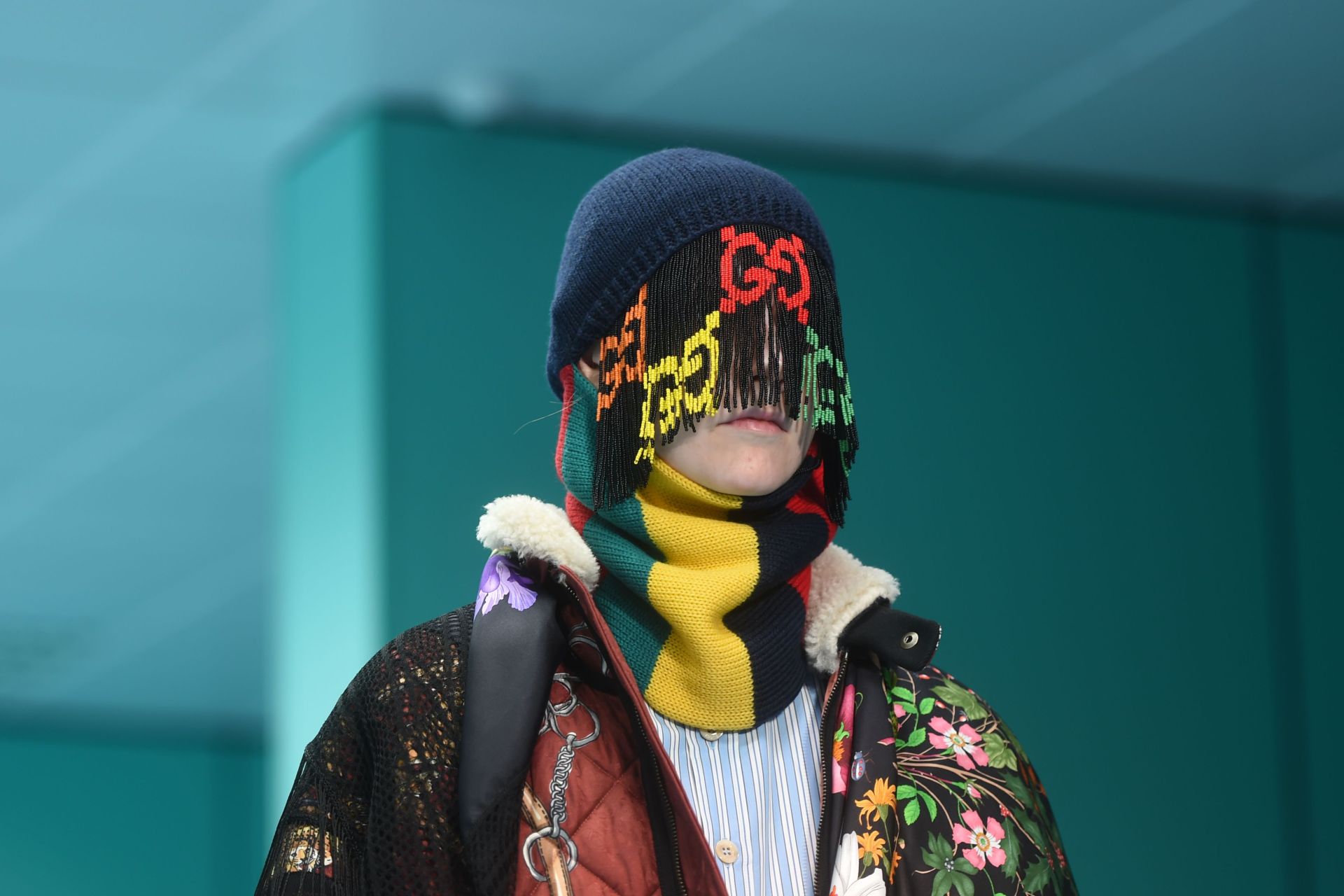 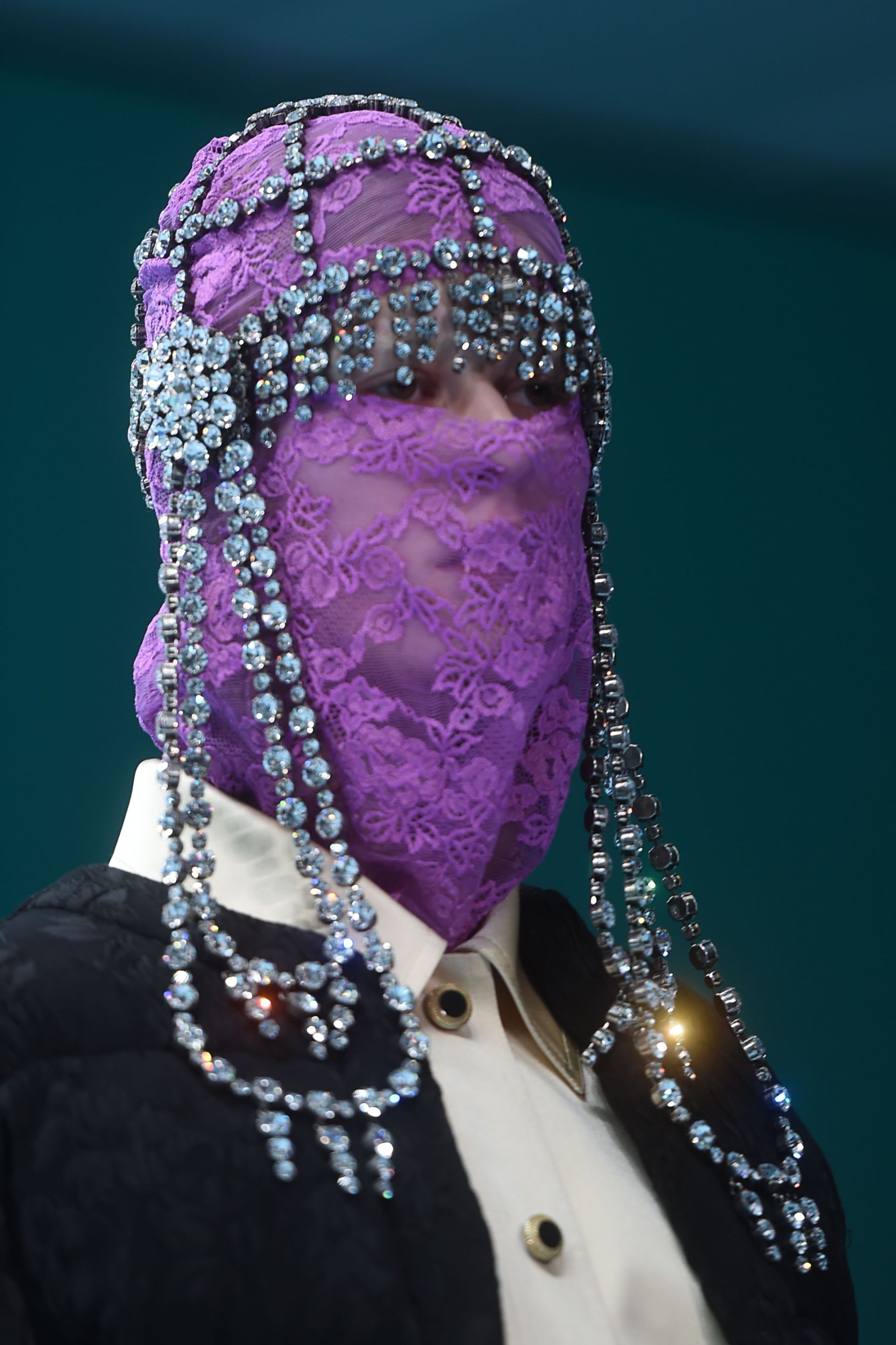 There was plenty of glitter in the collection.
Getty Images 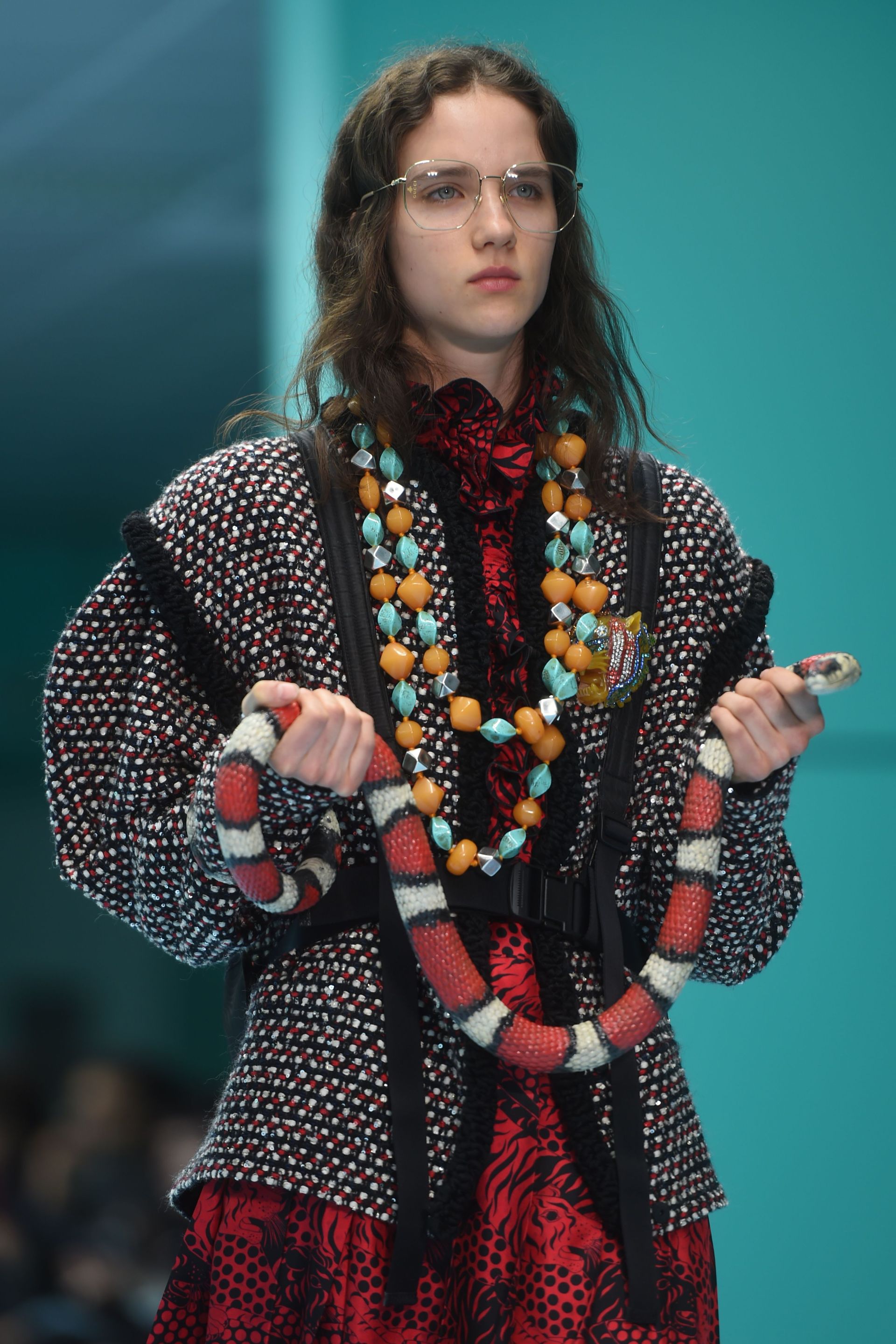 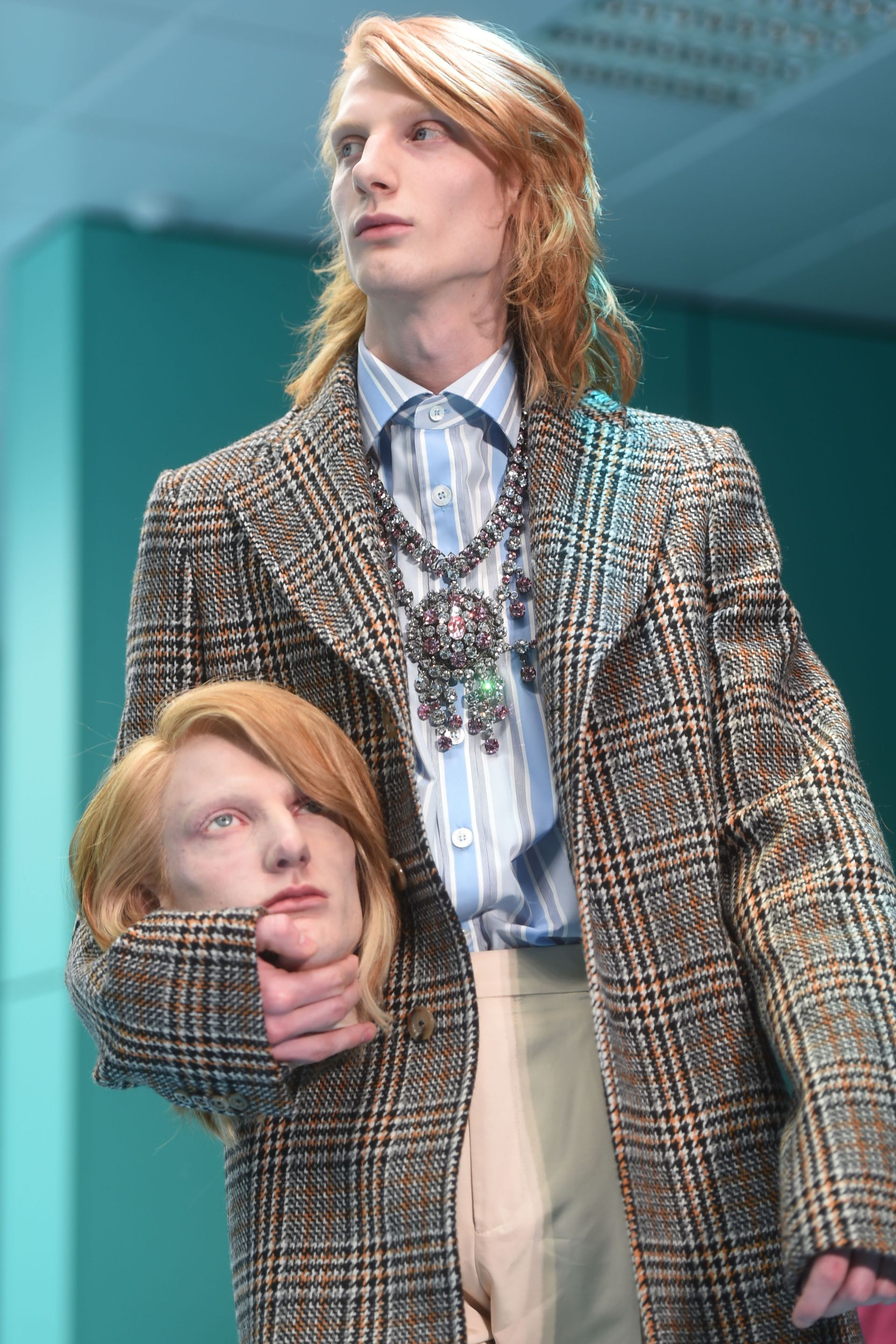 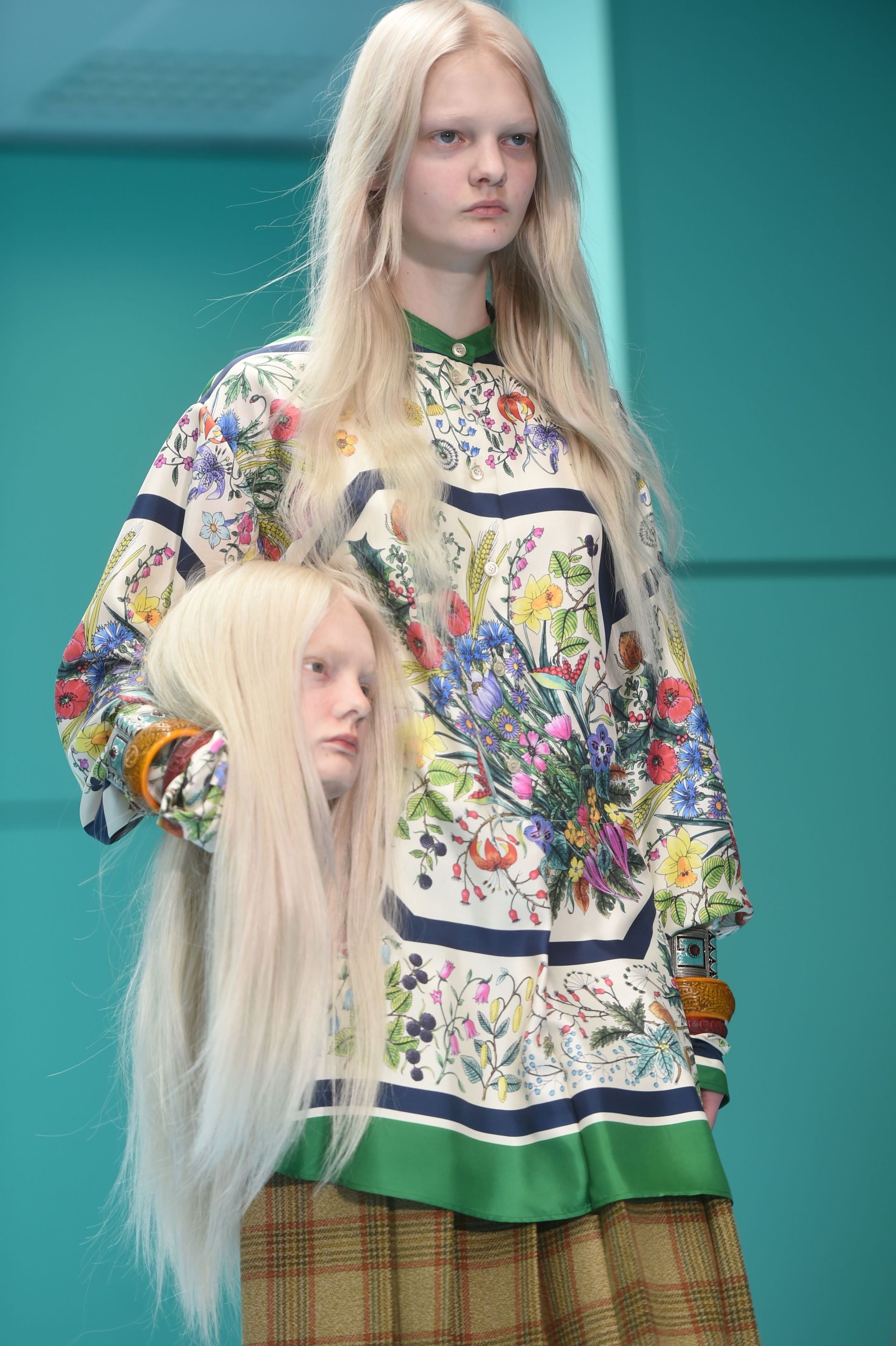 The show was inspired by A Cyborg Manifesto.
Getty Images 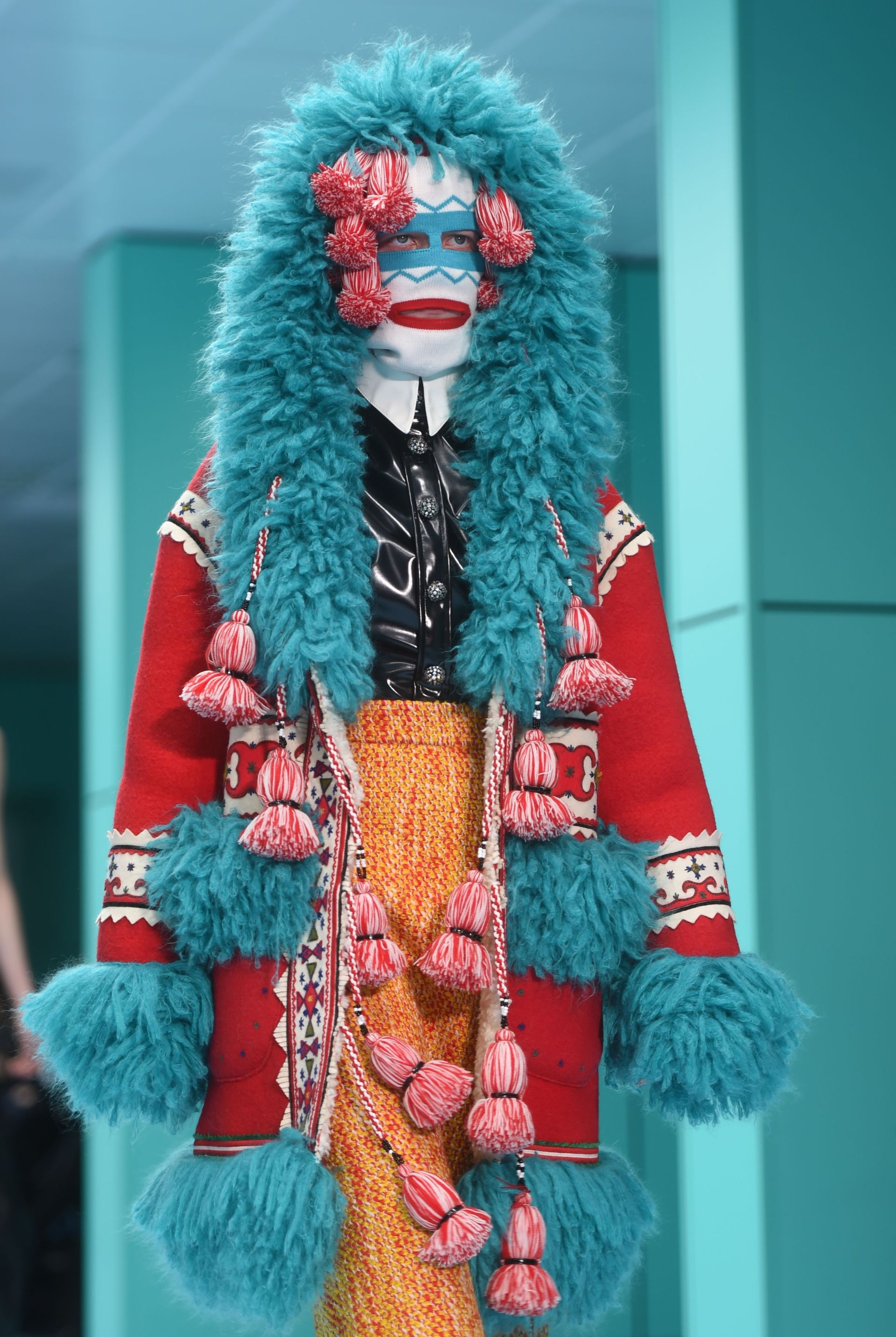 This was another look worth studying.
Getty Images
Advertisement 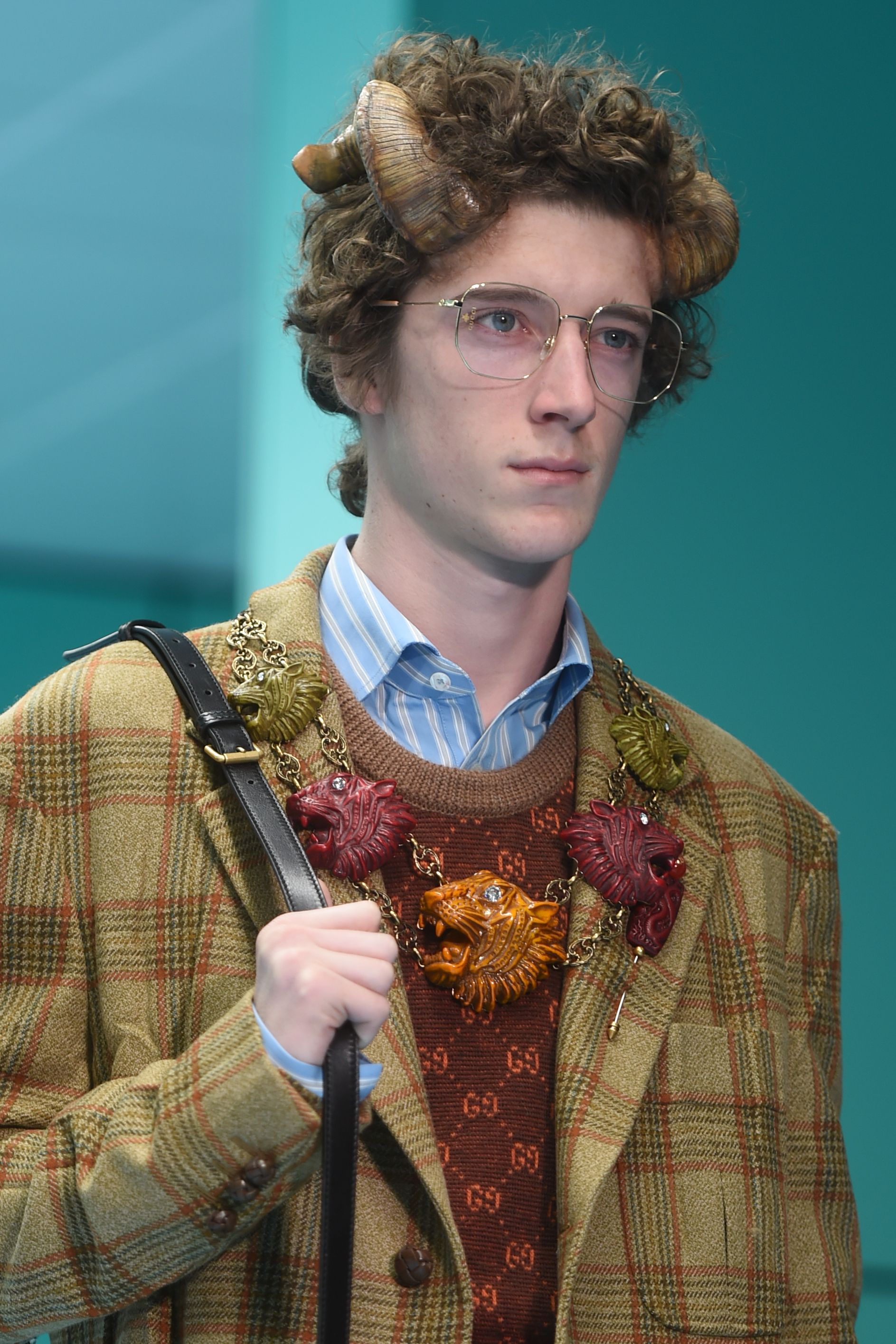 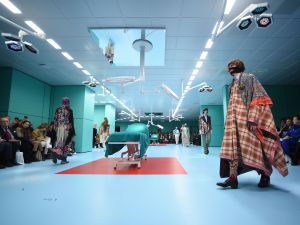 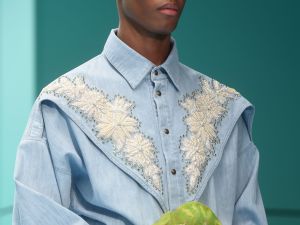 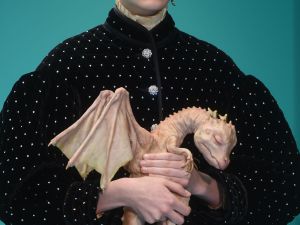 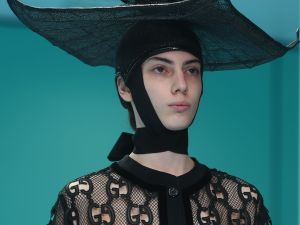 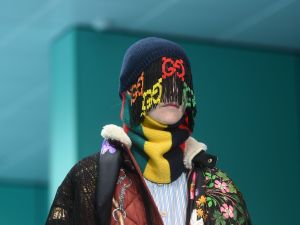 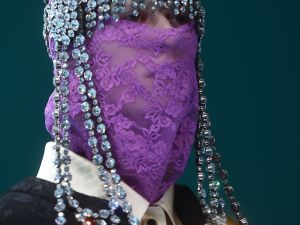 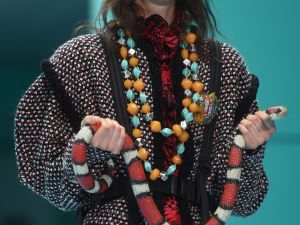 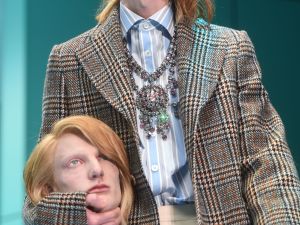 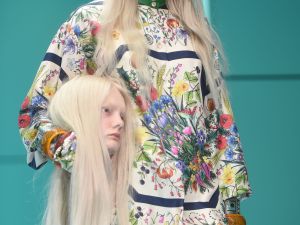 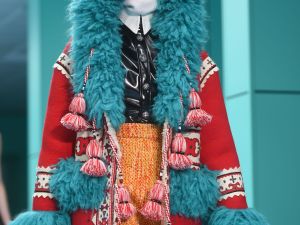 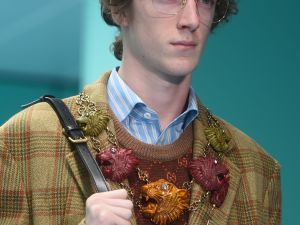 Each season following Alessandro Michele‘s increasingly over-the-top runway shows for Gucci, the same question lingers: How can he top this next season?

Following September’s ancient ruins-inspired set (where the runway represented the Tiber River and ancient Indian, Egyptian and Aztec structures were erected), Michele proved today that he can, indeed, exceed expectations over and over again.

For starters, the invitation for this Milan Fashion Week show arrived in the form of an orange timer, housed in a plastic bag that read “Parental Advisory, Explicit Content.” The red numbers counted down the moments until the show started. It came with no additional explanation, save for reminding showgoers that things would probably be weird.

And guess what? They absolutely were. Showgoers likely confirmed that fact for themselves when they saw the show’s setup: a sterile-looking turquoise operating room that could have doubled as a scene in a Wes Anderson film.

As it turns out, the theme of the show was A Cyborg Manifesto, an essay published by Donna Haraway in 1984 that is still entirely relevant today. The piece uses cyborgs as a metaphor for the female identity in terms of gender, politics and race.

And boy did Michele embrace the cyborg theme. Take, for example, the red-headed male model who was wearing a vintage-style button down and a sparkling pendant necklace. His look was accessorized with an exact replica of his own head. Seriously, his blank stare was perfectly recreated and tucked under the crook of his arm. The same goes for the following female model, who strolled down the runway with a depiction of her own noggin—and her flowing platinum blonde locks.

The human head accessories gave way to animals, both real and mythical. One model carefully carried a chameleon, while another cradled what can only be described as a baby dragon. Towards the end of the show, a slithering snake in a striped red, white and black pattern—nearly identical to the ones that are printed on Gucci backpacks and wallets—made its runway debut.

Each of the outfits were like archaeological digs. You could easily spend five minutes breaking down every look, digesting each individual floral flourish, sparkling accouterment and fringed headpiece. The actual clothing was awe-inspiring, too. Like the sheer, floor-length garment bags that were zippered up over full skirt suits and the various nods to the New York Yankees and San Francisco Giants scattered about, on ivory and red pinstriped suit jackets and pink velvet hats with oversized tassels. There were hats built in the style of classic Asian architecture and half balaclavas that only covered the model’s noses.

Which brings us back to the classic question: What can Michele possibly do to outshine this show next year?