The high school coming-of-age dramedy is a long-running staple of entertainment. The genre has its good (Saved by the Bell, Freaks and Geeks, Lady Bird) and its bad (Ryan Gosling, rocking a hilarious haircut, starred in Breaker High from 1997 to 1998. Look it up). Making your mark in this lane is all about getting the familiar and well-worn tropes of the genre to feel fresh and varied.

Sure, boy-meets-girl, but why is your version special?

To that specific question, Netflix’s new series Everything Sucks! succeeds in re-positioning the narrative to something new, even if the rest of the show never rises above the feeling of comforting re-runs. Which is fine.

Everything Sucks! is a cute look at two groups of high school outsiders who collide in 1996 Oregon. You’ve got your A/V club and your drama club and thankfully no dumb jock football players or popularity obsessed cheerleaders.

The main story centers on Kate Messner (Peyton Kennedy) and Luke O’Neil (Jahi Winston) as they each try to figure out who they are in a world that is getting increasingly complicated as they grow up.

The show comes from Ben York Jones, who is best known for his Sundance Film Festival darling Like Crazy and Michael Mohan, who wrote the Lizzy Caplan-Alison Brie rom-com Save the Date. The two aren’t exactly flush with showrunning experience or even many mainstream credits that you’d recognize. That callowness helps to both open up Everything Sucks! to new possibilities, while also keeping certain storylines on tracks you’ve ridden before.

The duo’s script has multiple points of entry for audiences from the idea of reinventing yourself in high school and yearning for connection to feeling trapped by your surroundings. There’s a lot in the initial episodes that viewers can point to and say, “I get that.”

The 1990s setting helps up the nostalgia factor with questionable fashion choices, VHS cassettes and hilariously outdated morning announcements. Any millennial born in the ’80s/early ’90s will be gleefully skipping down memory lane (look, a Blockbuster!).

They’ll also enjoy being transported back to a time before social media and all the complications that accompany it, when friendly interactions, flirting and surviving the social hierarchy of high school was a lot more straightforward, yet nonetheless terrifying.

Everything Sucks! does a good job of setting up issues we’ve all encountered without acting as if they are the end all-be all of life.

90210 may have been a hit back in the day, but grab an episode at random now, and you’ll think each student was facing the end of the world. Fellow Netflix series 13 Reasons Why deftly tackled some tough and important issues, but there’s no denying that it’s a bit heavy. Everything here is kept pretty light which makes for a breezy binge.

But what works best in the script early on begins to fizzle out as the show progresses.

Kate and Luke’s issues become a series of back-and-forth conversations covering the same ground, while their friends and supporting characters are never fully fleshed out to the point of resonance. The other school kids serve more as mechanisms that enable these two to recognize and overcome the stuffed-in-lockers and I-hate-my-parents emotional hurdles of high school drama. Attempts to give them their own arcs later in the season don’t always gel.

Rio Mangini, who plays Luke’s nerdy know-it-all friend McQuaid, and Sydney Sweeney, who plays the pretty Drama club female lead, do a lot with what they’re given. But it isn’t a great sign that I found myself more interested in Kate’s delightfully dweebish principal dad Ken (Patch Darragh, who is great in this) than what was going on with the kids in the second half of the season.

Somewhere along the way, your priorities switch as the adult storylines are, understandably, a bit more complex (though Kate’s arc is nice), which is likely not what the showrunners had in mind.

Is Everything Sucks! suddenly going to reinvent the genre for Netflix and shed new light on high school dwellings? No. But is it an enjoyable enough use of your time? Yes, so long as you have no problems with denim or CD players. 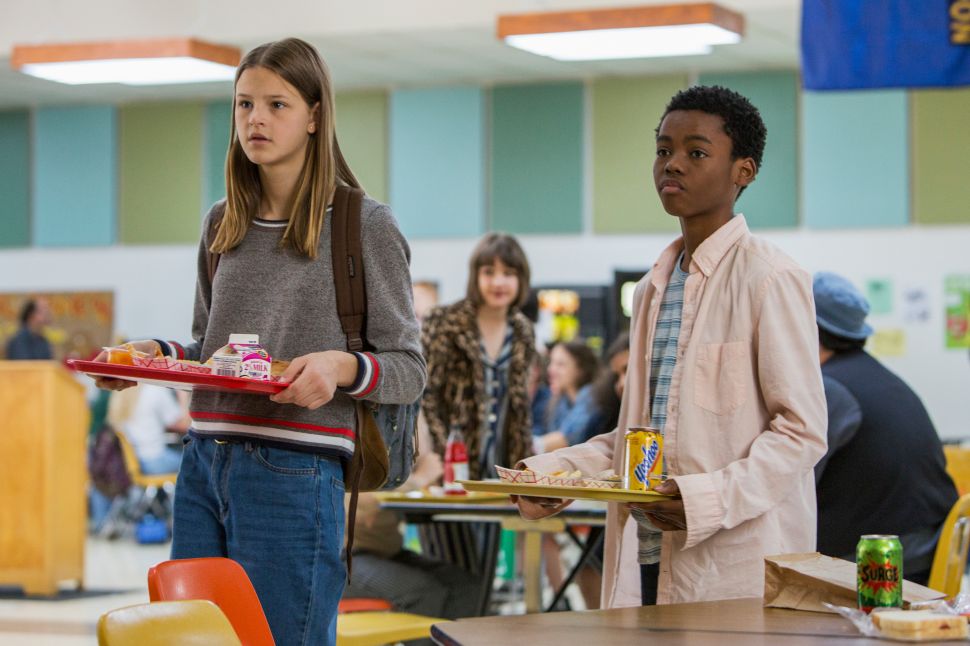