A night with a lawyer might sound like the least exciting appointment on anyone’s New York Fashion Week agenda, unless, of course, that evening is spent with Douglas Hand. The self-proclaimed and bonafide #fashionlawyer is the antithesis of legal ennui thanks to his loyal clients and fans that include the Council of Fashion Designers of America, Rag & Bone and 3.1 Phillip Lim.

Now, to add to his legal empire, Hand has released The Laws of Style, a tome published by The American Bar Association and directed at his fellow attorneys on exactly how to dress and conduct oneself in and out of the courtroom. “I do think professional men need a bit of sartorial instruction, particularly in this environment where more and more firms are going full-time business casual,” Hand told Observer during the book’s celebratory dinner at The Lambs Club. “Business casual, as The Laws elucidate, is far more challenging than wearing a suit. There are far more ways to cock it up.”

Also lending a hand in the celebration were longtime confidantes like PR maven Bonnie Morrison, former music exec and Blade CEO Rob Wiesenthal and Euan Rellie, a fellow high-powered bon vivant who specializes in developing brands in Asia. Rellie was brimming with glowing compliments for the man of the hour. “He has a natural aesthetic, a twinkle in his eye, he knows the law inside out, he’s commercial, he doesn’t take himself too seriously, he can manage temperamental clients like me, he’s just gay enough, and he’s reassuringly expensive,” Rellie joked of Hand. The two pals were introduced by Rellie’s wife, author and designer Lucy Sykes Rellie. “She was one of the first clients for his new firm,” Rellie recalled. “I’ve no idea how she found him. She has an eye for talent—and a crush on Douglas.”

Yes, Hand has an undeniable charisma, one that doesn’t often come packaged with such a deep knowledge of legal proceedings, which has given him a leg up on the competition since his early days at multinational Goliath firm Shearman & Sterling, where he specialized in mergers & acquisitions. “After a few years in New York, and a short stint in their Paris office, I realized that while I loved M&A, I also wanted to work with founders and creatives, which is something that’s pretty specialized,” Hand told us. “So I formed my law firm, Hand Baldachin & Amburgey LLP, which does precisely that, and my practice pretty shortly thereafter became steeped with fashion industry clients. Even though we’re a boutique firm, we’ve got a robust IP, litigation, retail leasing and commercial fashion law practice and, of course, I still do a fair amount of M&A.”

He is, in many ways, a secret weapon for the creatives of the world who want to take their business to the next level—albeit a more profitable one. “He’s kind of got it all,” designer Peter Som said. “I think I first met him at a CFDA event many. many moons ago, and I thought, ‘Hm, there’s a handsome, dapper dude.’ Lo and behold, he’s smart as hell, and the sharpest dresser.”

However, it’s Law #1 that he holds dearest. “The Professional Gentleman should always appear capable and elegant,” Hand recited. “Being proud of what you do translates into conviction and that gives clients, or potential clients, assurance that you know what you are doing. In the end, It’s a devastating combination.” 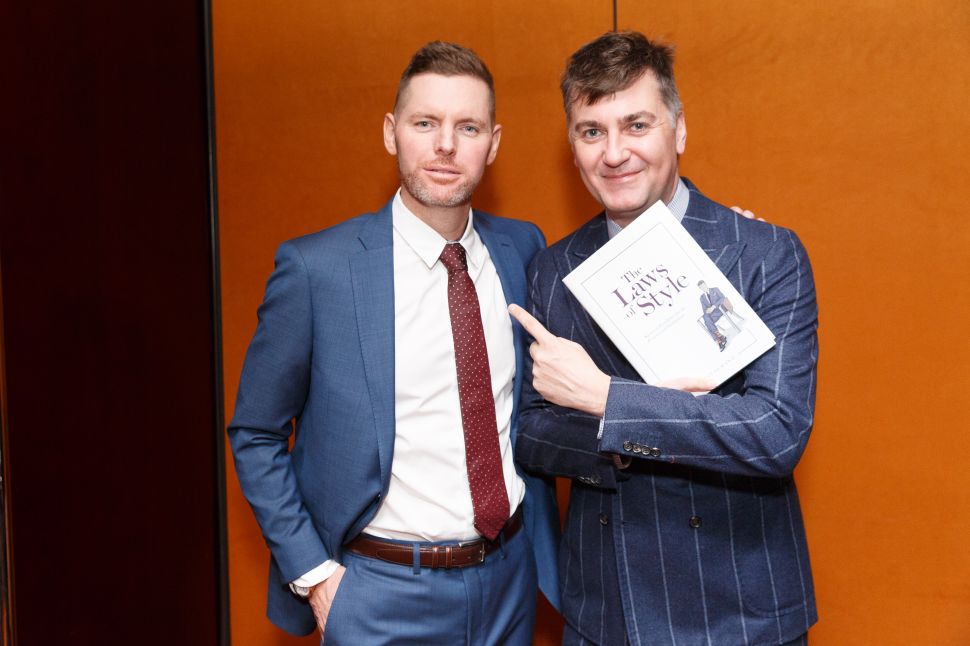