The entire Fifty Shades franchise is an insult to writers and moviemakers everywhere. Storytelling is subjective, so if you enjoy them then good for you, but you’re wrong and we can’t take your opinions seriously on anything anymore.

Unfortunately, it looks as if the joke is on us because these movies just keep making money.

Fifty Shades Freed, the trilogy capper in the series, took in $10.8 million on Valentine’s Day at the North American box office. In just two days of release, the movie has already pulled in $152 million worldwide, per Box Office Mojo.

In fact, the three films, based on the E.L. James book series have now grossed a combined worldwide total of $1.145 billion and counting.

Even though Black Panther has arrived to maul the February opening record set by Deadpool, Freed is still expected to top $300 million worldwide when all is said done, pushing the franchise’s cumulative total to around $1.25 billion.

Just so you know, the combined production budget of all three movies was just $150 million (excluding marketing costs). In other, more easily digestible words, “Cha-Ching.”

Universal is laughing at our derision of these movies… all the way to the bank.

The studio shocked the industry when it out-bid every other studio for the rights to James’ book in 2012 with a fat $5 million check. Now, insiders tell THR the studio is looking at profits of $500 million or more.

“I think Universal did a very good job. First and foremost, it chose a global, popular literary franchise. Second, it kept the budgets reasonable. Third, it went with an attractive release date around Valentine’s Day and marketed it as a romance series with a hint of eroticism, which played well with women,” Wall Street analyst Eric Handler of MKM Partners told the outlet.

Stars Dakota Johnson and Jamie Dornan were virtual unknowns when they were cast (Sons of Anarchy lead Charlie Hunnam exited the role first), which also helped to keep costs down. But to find such financial success with an R-rated series is damn impressive.

Universal domestic distribution chief Jim Orr told THR, “we take great pride in providing films for distinct audiences. To grow a $1 billion franchise out of an adult-themed property is an extraordinary achievement.”

Universal, which routinely ranks among the top three studios in annual box office revenue, has also spun out successful female franchises such as Bridget Jones and Pitch Perfect.

While the studio’s business acumen must be acknowledged, we beg that moviegoers please stop handing over their hard-earned money to this franchise. 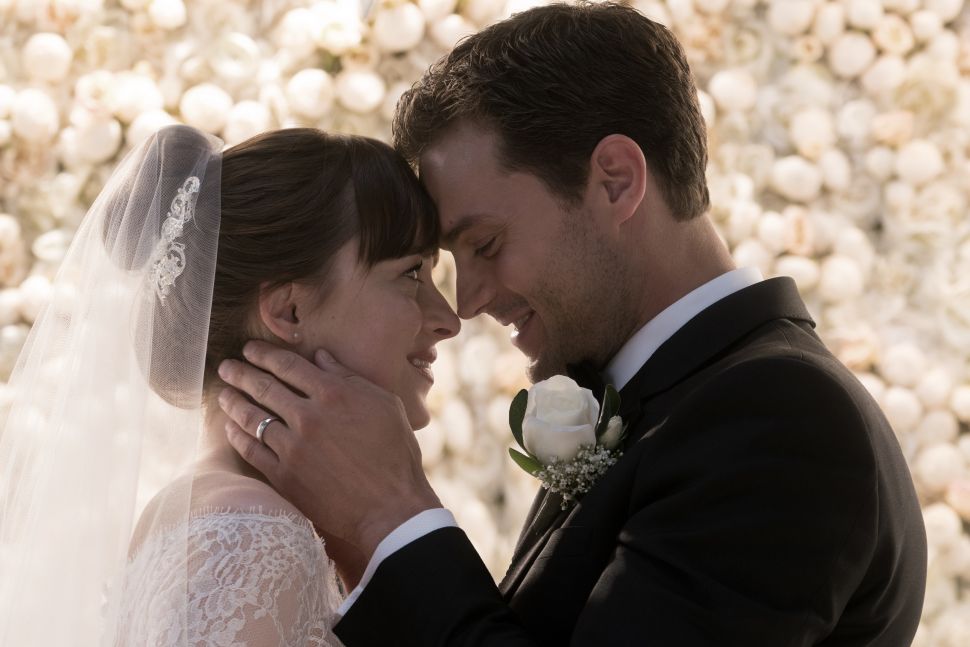