When Jessica Williams and Phoebe Robinson launched their podcast, 2 Dope Queens, in 2016, it blew up. Debuting at No. 1 on iTunes, their dynamic was palpable through the airwaves alone. They’ve developed a rhythm with each other that’s both comfortable and unpredictable. It’s both genuine conversation and performance piece, and all of it is sharp, smart and sassy.

Now they’re coming to TV with four 1 hour specials, all directed by Tig Notaro. For the shows, which are filmed live, the queens chose the iconic Kings Theatre in Brooklyn and packed it with 3,000 screaming superfans.

It’s hard to put this show in a box. The format is freewheeling and loose. It’s part intimate conversation, part celebrity interview, and also a highly curated roster of up and coming comedians, often highlighting female and LGBTQ stand-up comedians.

The queens—Jessica Williams and Phoebe Robinson—were happy to talk about their new show at a recent press event. Be prepared, they talk a lot, and they talk fast.

“We want the specials to be we’re like Solange on a budget,” began Robinson. “So, we wanted it to be, like, fun and cool.”

Williams jumped in to say, “As two people that do comedy, an HBO comedy special is, like, the pinnacle of comedy.”

Talking about Notaro’s role, Williams said, “Tig has such a unique and specific sense of humor that’s also different from ours. We were just, like, ‘We need your guidance. We love you so much!’ She just kind of let us do our thing. The three of us working together…it was perfect.”

Finding the right amount of spontaneity while still keeping the series from going off the rails became the responsibility of the head writer. “She’s freaking amazing, “said Williams, of Amy Anoibi. “She knew kind of what topics we wanted to cover, so we tried to have a general outline, but we still like to save the surprises for the stage. “

About the show’s appeal, Robinson took a quick breath and said, “I think there’s a tendency for people to think that if a project is created by a person of color or queer people or women, it’s just for that, like a marker, that society uses to recognize our identity. For me, I know, especially from the beginning, I was like this is relatable to everyone. I don’t think white guys sit down in the home and go, ‘I wonder if women are going to get my sense of humor?’ They assume that everyone understands their perspective. That’s how we went into our show as well.”

To this Williams added, “I think the truth resonates. Truth in comedy is important, and truth is universal. And my favorite thing is when I get white dudes who come up to me and are, like, “I really love 2 Dope Queens. I’m, like, ‘Look at you!’”

The ladies often use the term “Blerds,” meaning “black nerds.” Explaining the concept, Williams said, “Growing up as a black girl in the suburbs, all I wanted to do was play The Sims and read Harry Potter. A lot of my experience growing up was having a lot of the black kids that I went to school with calling me a nerd. I think there’s something to how there’s such a variety of black people, and we’re all into different things. We really wanted to capture the excitement that goes with nerdiness, and there’s an excitement that goes with fantasy and whimsy that I think, back in the day, it was, like, difficult for black people to publicly enjoy them. It’s kind of progress for us to be able to geek out on, like, frivolous things that are really just made up.”

Williams also says that the series highlights diversity in unique ways, “We have stand up [comedians] and storytellers that are women, people of color, or members of the LGBTQ community, because I think oftentimes people see black women or queer people, and they sort of put [a label on them] and assume that they’re all the same. But, in this we try to have multiple people of color because and our voices are not all the same.”

The public’s perception of the duo has shifted since they first launched their podcast, says Robinson. “The biggest difference [now is] that people see that we are more of a full package. You’re not just getting us as performers, you’re getting us as people who think, who have opinions, who know how to produce, and be really good bosses.

Personally, she says that “2 Dope Queens” has, “taught me how to really truly believe in my voice and keep creating content and trusting that it will find an audience. It’s taught me to really own my ‘black lady’ voice.”

Asked how they met and came to be friends, Robinson joked, “We met on Tinder.” Williams laughed and said, “Swipe right!” Robinson quickly added, “We did not [meet that way but] wouldn’t that be cute if we met on Tinder?

Telling the true story of how they teamed up three years ago, Robinson explained, “Jessica was still working on The Daily Show, and I was doing extra work on a piece she was doing about black women’s hair in the military, We had a really great time. She said her birthday was coming up, and that she wanted to try stand up. I was, like ‘Hey, just do it as a one-off goof. If you hate stand up, you never have to do it again.’ We really just had this great chemistry on stage. It was, like, a super sexy one night stand, but then we put a ring on it.”

Focusing the comedy portion of their podcast often takes some tough decision-making, says Robinson. “As long as we have the narrative of each episode in place, then we take out jokes that derail us from that, and it’s okay. I think we just are not precious about the comedy.”

Williams added, “We also do a lot of just riffing off of each other. So I think that makes editing a bit tricky. So for the most part, we really try to keep it as it was in the live show, like the sexy version that you guys get in your feeds.”

For the HBO shows, Robinson points to help from Notaro as key. “Tig was really great at making sure we kept the necessary jokes in. Just having her eye on it [helped]. She would send us edits and then we would give her back notes. It was really kind of an easy process in a way because we all had the same goal in mind, which is we wanted the best 55 minutes for each episode.”

Rifting on how they chose the themes for the episodes, Williams said, “Okay. We have, like honestly, we have done a lot of this podcast, but we have the same things that we usually end up talking about. We have recurring themes.”

Added Williams, “And we decided New York City is one, just because this, our baby, 2 Dope Queens, was made in Brooklyn. So we definitely wanted something that was NYC themed. Then we have another one that’s called “Hair” because we love talking about hair. Hair and black women are like peanut butter and jelly. That’s, like, the thing.”

“And “Hot Peen,” because [it means] penis, and we like dudes,” added Robinson.

The Queens revealed that they’ll be hosting some guest stars this season, including Jon Stewart, Uzo Aduba, Sarah Jessica Parker and Tituss Burgess. “We tried to make sure that we weren’t just asking them canned questions,” said Williams. “I think when we have special guests on the show, what’s fun about it is that we kind of just mess around and ask them questions like, ‘What do you guys think about cocoa butter?’ And, what’s great about these guests is that they were all really excited to do the show, They were game for anything.”

Asked if they incorporated the recent #MeToo movement into their content, Williams responded with, “We didn’t [actively] integrate [it into this], but just because it didn’t make it in, because of the values that we have, we’re always pushing for equal rights in different platforms for other people. I think that, because that is what we are, it just comes out in our comedy. No matter what I create, it will be positive for women and positive for queer people. That is my #MeToo. That is my protest. That is my support for other people.” 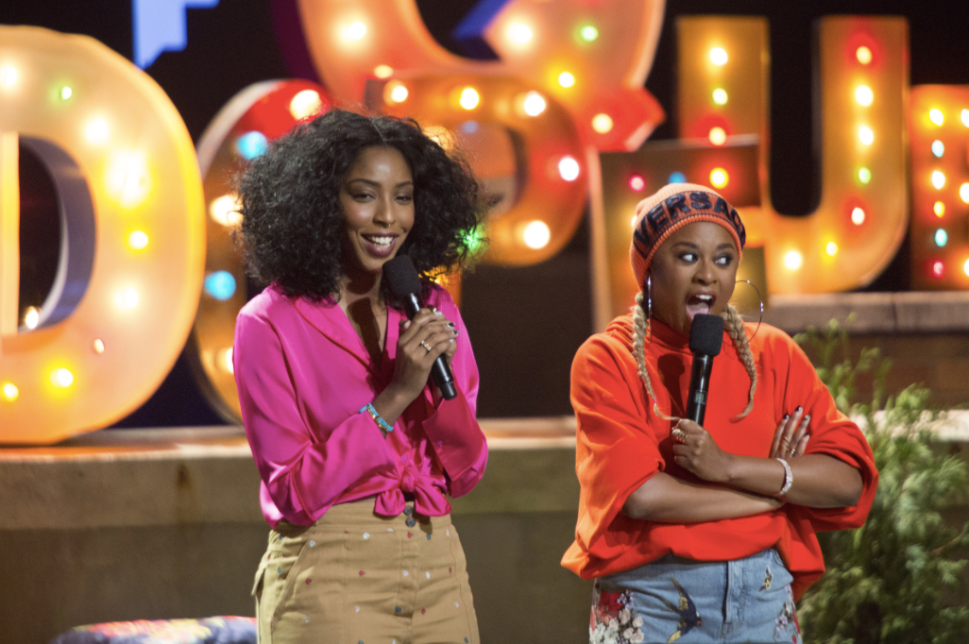