To be an Olympian requires patience, endurance and a tons of training—and we’re not even talking about the athletes. That’s just what goes into preparing yourself as a photographer on assignment during the heavily scrutinized event. At the PyeongChang Winter Olympics in South Korea, the Getty Images photography team are performing at the top of their game in some of the lowest of temperatures. Like the athletes themselves, the team of 45 have been preparing for months—if not their whole careers—for these grueling two weeks in which they’ve been charged with capturing the heartbreak, physical aches and record-making moments of over 3,800 Olympic competitors.

These intrepid image makers arrive on site months in advance, searching out the best photo outposts and ensuring they can physically handle the incline of the terrain. Then technicians brave icy elements to lay tens of thousands of ethernet lines up 5,000-foot slopes to make sure that the photographer can send back images the second after they capture a medal-winning moment, hoping all the while that the cords don’t snap in the below-zero temps.

Once the internationally anticipated event is underway, the photo team is up before the crack of dawn, trekking to their posts on the slope while lugging nearly 50 pounds of supplies and gear. There they’ll sit for hours, waiting for action. But the photographers aren’t the only ones who need to keep warm. The cold climate drains battery life—phones can go from an 80 percent charge to 1 percent in the matter of couple minutes—meaning hand warmers have to do double duty as battery incubators.

Observer caught up with 10-time Olympic Games photographer Ezra Shaw to talk about the training and the temperatures he’s enduring this year as he captures some of the best moments of the alpine skiing events in South Korea.

Besides the weather, what makes shooting the Olympic Games tougher than other sporting events?

We have had three races canceled in the first four days due to weather, so staying positive through all the delays is very important. It can be discouraging to get all your gear packed and get up on the mountain only to wait for a few hours in the freezing temperatures to find out the race is postponed. The other big difference is the pressure that each photographer puts on themselves to do the best they can do at the Games. Similar to the athletes, who are the best in the world, the photographers that get to cover the Olympics are also some of the best in the world. So we want to do all that we can to get the best pictures possible, but the continuous schedule through two weeks, with little sleep, makes it difficult.

What are some of the key elements of a great shot?

I think there is always a little bit of luck in getting the great shot at the Olympics. First, you have to be lucky enough to be assigned to right event, and then be in the right position. Most of the great images that people remember depict the moment that something big happens, like Shaun White winning his third gold medal on Tuesday, or an athlete breaking a world record. However, capturing the moment isn’t the only thing that makes a picture great. You have to be in the right position with the right lens. It is very important to have a clean background so that the moment stands out on its own. Also, having the proper lighting is critical. But, there are also great pictures that aren’t all about the big moments. Scenic images that capture the atmosphere of the game or great action pictures that happen at certain events, for example.

Is there an event that is more grueling than others to capture?

I’m probably biased because it’s what I am covering right now, but I think that alpine skiing is the toughest sport to cover at the Games. We wake up really early every morning, and you not only have to get all your camera gear together, but you also have to get all your ski gear together. Each morning we are up on the mountain before the athletes, looking to find the best shooting positions for the race. Then we have to be in position an hour before the race starts and we have to stay in the spot for the entire race. So it makes for a long day out on the mountain.

Can you give us a sense of what you carry in your pack? Are you working with any new gear this year that is proving helpful or otherwise facilitating better capture of the Games?

This year I have battery-powered foot warmers for my ski boots, which makes it nicer to be on the side of the mountain. Other than that I’m carrying two Canon 1DX Mark II camera bodies, four lenses, two extra camera batteries and compact flash cards, wireless transmitters, and a weather cover for the camera. For me, I’m toting crampons for walking on snow after getting off skis, a Thermos of hot tea, energy bars, several pairs of gloves and an extra hat, and lots of hand and foot warmers.

What has been your favorite photo you have taken at the Games so far and why?

My favorite picture so far is probably from a training run for the men’s downhill race. The picture is of Aksel Lund Svindal going over a jump. As he went of the jump, he hit the gate and it is flying out of the course behind him. 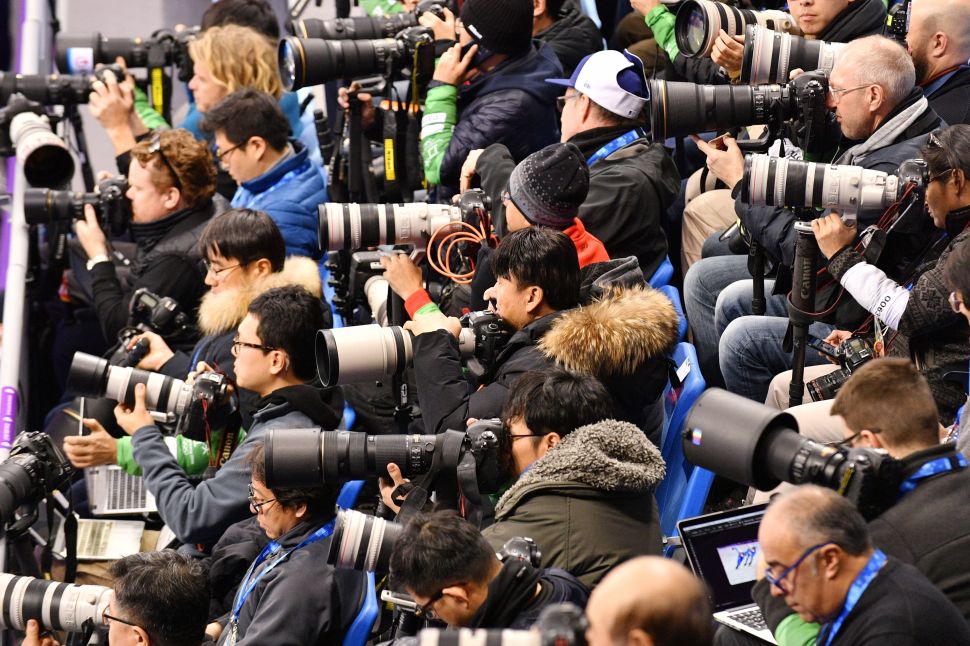