LaGuardia Airport is no one’s idea of a calm oasis, but a new service is bringing more privacy and convenience to your wait at the terminal.

Jabbrrbox, a startup offering private, internet-connected workspaces, recently installed eight booths in LaGuardia’s Central Terminal B. These office pods are meant for mobile travelers, allowing them to work on the go in quiet surroundings—even if they’re in the middle of an airport.

Architect Brian Hackathorn and entrepreneur Jeremy Jennings developed Jabbrrbox. Hackathorn first had the idea for it in 2013, when he was looking for a place to work between meetings in midtown Manhattan.

He ended up in a courtyard across from Grand Central Station, where he observed fellow travelers trying to work without success. For example, two construction workers attempted to charge their phones but were stopped by a security guard.

“That’s when I had the idea for a modern day phone booth—a Zipcar for workers, with reservable space,” Hackathorn told Observer.

He brought the idea to his friend Jennings and the two created a business plan. They worked on the idea for several years—first on nights and weekends and then full time—and ended up creating a small pod, featuring amenities like Bluetooth, Wi-Fi and USB charging.

The duo sold their first pod to Audible two years ago, and now there are over 200 Jabbrrboxes throughout the U.S., Germany, England and Ireland.

The booths are very popular in commercial offices (70 percent of American workplaces are now open-plan). The LaGuardia Jabbrrboxes are the company’s first booths in a public space.

Airports are the perfect locations for Jabbrrboxes, according to Jennings.

“They’re where modern, mobile workers work and congregate,” he told Observer. “Now, they can have some acoustic and visual privacy.”

Users can access the Jabbrrboxes (at LaGuardia or anywhere else) for 30 minute increments—the booths cost $15 per half hour to use. Lights on top of each booth indicate whether they’re available (green means yes, red means no). There’s also a touch screen on the right side of the door to make reservations.

Once users sign in, they receive the door passcode and Wi-Fi password. All Jabbrrbox wireless networks are private and encrypted.

The LaGuardia booths come with extra amenities, including terminal and concourse maps, so users can locate restrooms and concession stands. Customers can also scan their boarding passes, track their flights and see announcements.

@JoeBiden We are doing our part to make LGA less third world. Check us out the next time you visit!

“Technology has enabled mobility, but the physical infrastructure has not kept pace,” Jennings said. “We’re constantly surrounded by stimulus, but we still need peaceful, quiet and comfortable spots.”

Indeed, while Jabbrrbox features many technical amenities, the duo pointed out that it can also be used for meditation or other calming activities before travel.

Their ultimate goal is to operate a network of Jabbrrboxes in airports, hotels and commercial buildings.

“We see a domestic and global ecosystem of on-demand, reservable space in pedestrian-dense environments,” Jennings said. 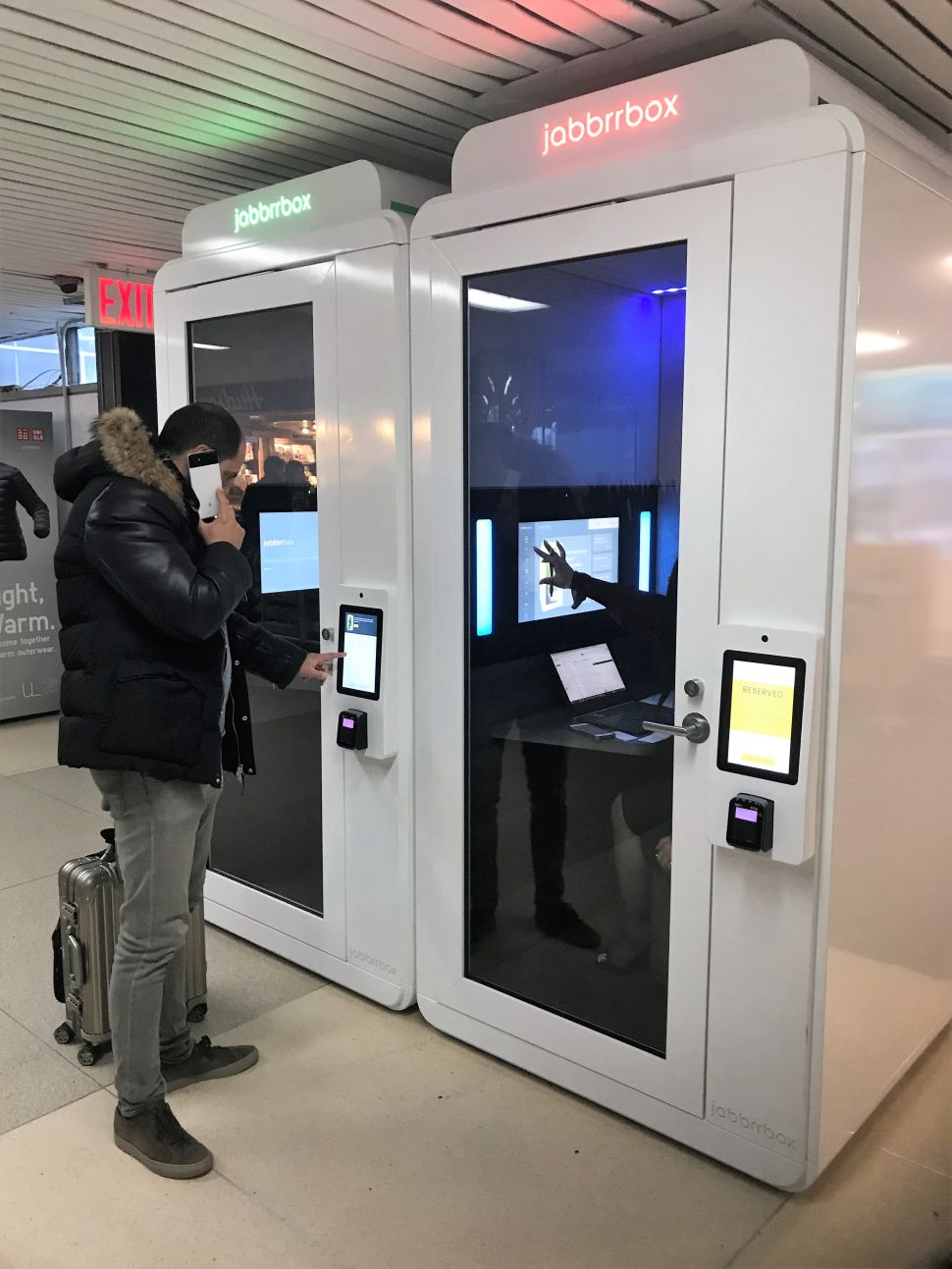