Jake Tapper interviewed that Florida sheriff the way a prosecutor questions a hostile witness in a courtroom or a senator grills a government official in a committee hearing.

Tapper’s questions were fair, blunt, well-informed and scorching Sunday morning on State of the Union on CNN.

His was the only Big Five show to speak with Sheriff Scott Israel of Broward County. The interrogation, by remote camera, lasted an unusually long 28 minutes, uninterrupted.

To his credit, Israel answered most of the questions. Even his evasions unintentionally hinted at terrible truths. Both men kept cool and professional demeanors.

But the intensity was extraordinary. Tapper, buoyed by his own Florida sources, detailed allegations of poor police work before and during a gun massacre that took 17 lives at Stoneman Douglas High School in Parkland on Valentine’s Day.

TAPPER: “Are you really not taking any responsibility for the multiple red flags that were brought to the attention of the Broward Sheriff’s office about this shooter before the incident… people near him, close to him, calling the police?”

ISRAEL: “Jake, I can only take responsibility for what I knew about it. I exercised my due diligence. I’ve given amazing leadership to this agency—”

Sunday’s show continued an impressive streak for Tapper on a major cultural and political story.

On Wednesday, he hosted CNN’s highly-watched Town Hall meeting in which students, parents and friends of the victims questioned elected officials, including U.S. Senators Bill Nelson and Marco Rubio of Florida.

On Thursday, on The Lead that he anchors at 4 p.m. on weekdays, Tapper presented an unusually bitter exchange between two commentators—Kirsten Powers and Mary Katharine Ham—about guns.

On Friday, Tapper told how Coral Gables police arrived at the school to find four of Israel’s deputies, with guns drawn, taking cover outside. One, assigned fulltime to the school, has resigned.

Tapper asked Israel about it on Sunday.

“That’s absolutely untrue,” Israel told Tapper. “We had a conversation… I’m not going to share that conversation.”

Tapper let Israel give long answers, particularly at first. Israel, in uniform but not wearing a hat, licked his lips while Tapper asked questions. As the discussion continued, Tapper’s questions grew harsher.

He asked Israel about a call last November 30 to the sheriff’s department warning that the shooter, a troubled 19-year-old, might “explode.” It was one of many police interactions with the killer or those who knew him.

ISRAEL: “Well, if that’s accurate, Jake, there needs to be a report… and the officer who handled that is on restricted duty, and that’s an active internal investigation… Deputies make mistakes. Police officers make mistakes. We all make mistakes…”

Among anchors in cable news, Tapper has presented the sharpest and most comprehensive reporting on a story that could be a significant turning point in modern American history. In that CNN still has Crossfire in its DNA, Tapper’s panel guests often cross word swords in pointed exchanges.

This happened Thursday when the conservative Ham and the liberal Powers disagreed on the wisdom of so many guns, long and short, in so many hands. Ham asked Powers if her answer was to ban them.

“Yeah,” Powers said before Ham began to lecture Powers about the Constitution.

“You asked me a question,” Powers seethed, loud enough for the mic to pick it up under Ham’s voice. “I’m trying to answer it.”

Powers then said she grew up in Alaska in a house with a dozen guns and said she has friends who treat guns like toys to play with at the shooting range.

Ham wouldn’t give up, saying “far more gun crime and more gun violence is committed with handguns. So, is the next step (to ban) them?”

POWERS: “Well, actually, they are banned in a lot of places—”

HAM (interrupting): “And do we have less gun crime in those places?”

For those who don’t regularly follow cable debates, this is the “Chicago” argument of the right wing. If Chicago has harsh gun laws and many people still die from guns in Chicago, this logic insists, therefore, all gun laws are misguided.

Ham concluded by turning away from Powers and toward the camera with a smug smile.

“We don’t have less gun crime in Chicago because people go to states that don’t have them banned, and they buy them and they run them into Chicago and they sell them,” Powers said. “So, actually, if they were banned everywhere, we might have a different outcome.”

Tapper let it go on. Later in the show, he brought them back for a rematch. Powers called the National Rifle Association “nefarious” and started to analyze its political clout and how elected officials feared to cross the NRA and single-issue voters.

Ham defended the NRA by interrupting Powers, who didn’t like it.

HAM: “Well, I mean, yes, we’ve heard, yes. I’m-I’m-I’m asking you a question. Aren’t they maybe just scared of voters who believe these things? It’s not just an organization?”

POWERS: “I was literally just going to say that.”

Allowed to speak again, Powers concluded by discussing assault rifles with high-capacity magazines like the one used in Florida. 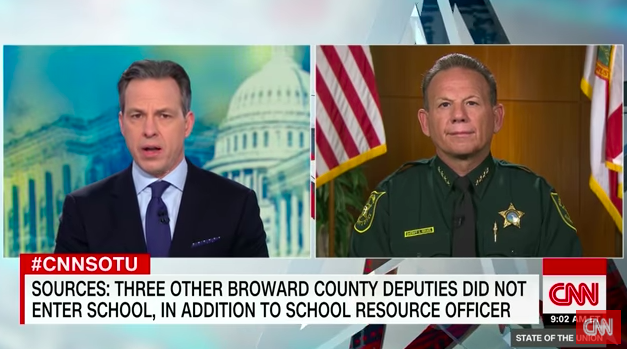