When Kate Middleton arrived at the BAFTAs ceremony in a green frock, she stirred up some controversy. The rest of the stars on the red carpet were dressed in black to represent the Time’s Up movement, following the lead of the actresses at the Golden Globes. But if the Duchess of Cambridge appeared in a black gown, the choice would have been equally, if not more, contentious. Since becoming a member of the royal family, Middleton has had to follow strict royal protocol, which includes being apolitical in public.

Unlike Meghan Markle, who has already started bending the royal rules (maybe her princess lessons aren’t working) the Duchess is best known for abiding by the strict standards set by the royal family. And part of belonging to the royal family means not siding with a political movement publicly. While there’s no law prohibiting Queen Elizabeth from voting in elections, it’s considered unconstitutional for the Monarch to vote, at least according to the U.K. parliament. Because of this, members of the royal family who are close to Queen Elizabeth don’t vote.

For this year’s BAFTAs, which Prince William has been president of since 2010, women in entertainment penned an open letter in The Guardian asking guests to wear black in solidarity with the #MeToo and Time’s Up movements. The letter was signed by Emilia Clarke, Emma Watson, Poppy Delevingne, Gemma Arterton, Noomi Rapace, Gugu Mbatha-Raw, Saoirse Ronan and Carey Mulligan, among many others.

“Perhaps Time’s Up seems a million miles away to you–started by a group of women with privilege. The truth is, we are all workers, and whether we’re in the limelight or in the shadows, our voices matter,” they wrote. For many, #TimesUp doesn’t seem particularly political, as it’s purpose is ending sexual harassment and abuse. But the royal family is expected to remain politically neutral at all times, especially in public. Because of this, Middleton opted for a green dress, although she did give her own nod to the movement by pairing her emerald Jenny Packham gown with a subtle black sash.

This isn’t the only odd royal rule the Duchess of Cambridge must follow. Unlike Prince Harry and Markle, she’s unable to show PDA. And, according to Harper’s Bazaar, there are even more regulations. When Queen Elizabeth stands, everyone in the room must join her, and no one can eat after the Queen finishes her meal. Other rules include not playing Monopoly, packing black ensembles while traveling abroad to prepare for a sudden death and wearing hats and tiaras only at night (after 6 p.m., to be precise).

Royals are also notoriously prohibited from signing autographs or taking selfies; as a precaution, BAFTA attendees are told not to request selfies with the royal family members ahead of the event. Markle has already broken this rule by snapping selfies with fans, although she’s technically not a member of the royal family just yet.

Despite not wearing black, Middleton has been vocal about her support for women’s issues. She’s worked tirelessly to destigmatize mental illness and she frequently volunteers with charities that support children and parents. Perhaps her black sash is a step in a more political direction. 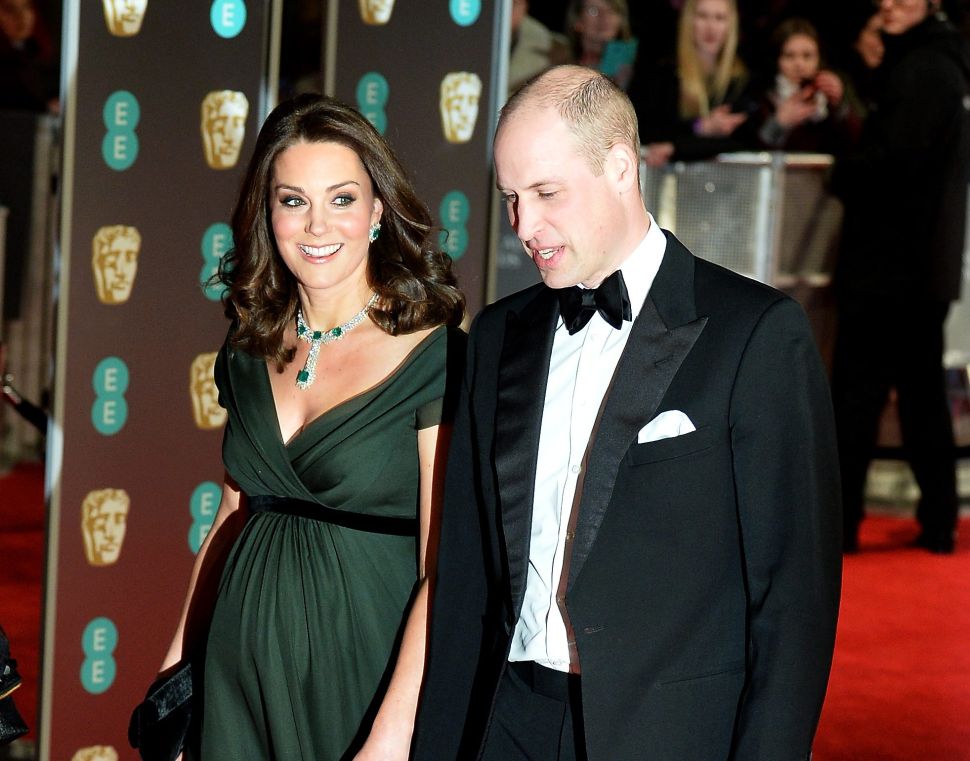