The Congressional Harassment Reform Act—which has more than 25 bipartisan co-sponsors—would require congressional lawmakers who are found personally liable for harassment or discrimination to pay for settlements, which the Senate or House Ethics Committee has to approve.

The bill also states that settlements have to be publicly disclosed unless the victims choose to keep them private. Victims can also choose how they resolve the complaint, with mediation and counseling no longer mandatory. And the legislation includes an online platform to improve the tracking of complaints and procedures.

Gillibrand is calling on Schumer, a Democrat and the Senate’s Minority Leader, and McConnell, a Republican, to either put the legislation on the floor for a vote or include it as part of the omnibus appropriations bill.

“The more time that goes by without addressing this broken system, the more people suffer,” she said in a statement. “Offices suffer from the lack of certainty about what is required of them. Staffers suffer when they feel as though they have no place safe to turn in the face of harassment and discrimination. The taxpayers suffer when they are required to shoulder the financial burden of our elected officials’ poor behavior.”

Spokespeople for Schumer and McConnell did not immediately respond to requests for comment on Friday.

The U.S. House of Representatives passed the legislation earlier this month.

The legislation also extends protections to interns and fellows, requires everyone working on Capitol Hill to take the Office of Compliance (OOC) training and changes the OOC’s name to the Office of Congressional Workplace Rights.

A confidential advisor would also be on hand to consult with employees who have alleged harassment or discrimination and help employees with allegations under Title IV of the Civil Rights Act of 1964, which prohibits sexual harassment.

The OOC’s General Counsel would also have the authority to conduct interviews and collect evidence concerning harassment and discrimination complaints, including interviews with former employees. Individuals can also work remotely without penalty throughout proceedings.

Gillibrand has become a key voice in the Senate on tackling sexual assault, with legislation combatting assault on college campuses as well as in the military. 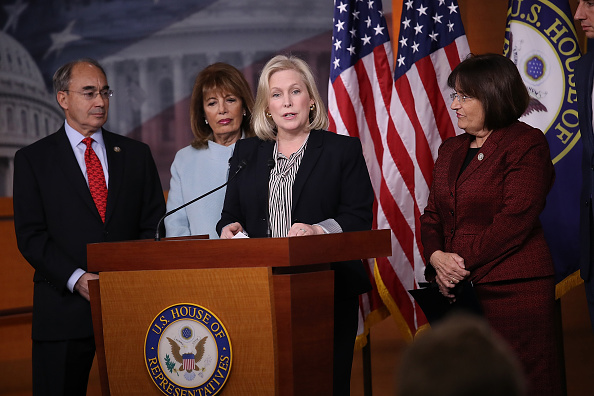