Ever since Donald J. Trump was inaugurated as president 13 months ago, with his White House shrouded in a fog over its murky Russia ties from day one, Fridays have been the day that big news gets dumped, per venerable Washington tradition. Last Friday did not disappoint, and a week that was supposed to be about the White House’s big infrastructure plan instead wound up focusing on Russia, yet again.

Beginning in 2014, the Kremlin began laying the groundwork for information warfare against the American electorate, collecting intelligence and establishing masked computer networks to employ social media in a weaponized manner against our democracy. The hub of this secret effort was the Internet Research Agency in St. Petersburg, which functioned as a front for Russian intelligence; at its 2016 peak, it was spending $1.25 million per month on operations to influence our election with online disinformation and propaganda. This effort aimed to sow distrust among Americans, further poisoning our already polarized election, while boosting Donald Trump and Bernie Sanders at the expense of Hillary Clinton and Trump’s rivals in the Republican primaries.

These indictments fundamentally shift the debate about what happened in 2016. Despite nonstop claims for more than a year by President Trump that Russian interference in his election is a “Democratic hoax,” an assertion that has been parroted virulently by his backers, it’s now glaringly obvious that Kremlin officials indeed did clandestinely interfere to help put Donald Trump in the White House. Here, the president’s repeated assurances that Moscow did not meddle in his election—because Vladimir Putin told him so!—appear worse than merely unbelievable.

Predictably, the White House has latched on to the fact that Mueller’s indictments state that no members of Team Trump wittingly parlayed with Russian spies in 2016, who masked their identities. Deputy Attorney General Rod Rosenstein’s statement, “There is no allegation in this indictment that any American was a knowing participant in this illegal activity. There is no allegation in the indictment that the charge conduct altered the outcome of the 2016 election,” has been judged especially significant by the president and his defenders. However, Rosenstein’s careful parsing of his statement about this indictment implies that more may be coming.

In truth, this is just the first wave of Mueller’s indictments against Team Trump. More, and worse, is headed to 1600 Pennsylvania Avenue. The special counsel’s efforts to rope White House staffers into obstruction charges now take on different coloration as what they were trying to hide is coming into focus. At a minimum, events like the Team Trump June 9, 2016 meeting in Trump Tower with the Russian attorney Natalya Veselnitskaya—in reality, a Russian intelligence officer—ostensibly to discuss adoptions, look more sinister when viewed against the backdrop of the broader Kremlin conspiracy against our election. As do pro-Kremlin changes to the Republican platform on Ukraine that were pushed by Team Trump at the party’s mid-July 2016 convention in Cleveland.

Even the most senior White House officials are no longer willing to publicly endorse the president’s repeated lies about what happened in 2016. The head of Trump’s own National Security Council, Lieutenant General H.R. McMaster, in response to the Mueller indictments, stated in Munich that the facts of Russian meddling in our election are “beyond dispute.” For the increasingly besieged White House, there is no going back now—and there are no exits.

Perhaps sensing this, the president went to Twitter for a series of rants against the Russia investigation, the FBI, and his political opponents that has been unusually hostile and overblown even by Trump’s impressive standards. Of particular interest is how President Trump has latched on to the fact that, per Mueller’s indictment, the Kremlin began laying the groundwork for information warfare against our election way back in 2014.

As the president tweeted on Saturday: “Funny how the Fake News Media doesn’t want to say that the Russian group was formed in 2014, long before my run for President. Maybe they knew I was going to run even though I didn’t know!”

This claim is absurd on its face. That Donald Trump floated the idea of running for the White House several times before he officially threw his hat in the ring on June 16, 2015, is a matter of public record. Moreover, he applied for a trademark on his slogan “Make America Great Again” back in November 2012, just six days after Barack Obama was reelected. Donald Trump’s Twitter feed between then and the official announcement of his candidacy included several references to his impending presidential run. The future candidate was re-tweeting others’ use of the #Trump2016 hashtag as far back as 2013, another indication that the White House was on Trump’s mind long before June 2015.

Then there’s highly classified intelligence demonstrating that Donald Trump was planning on running for the presidency—with Kremlin backing—years before the 2016 election. Back in the spring of 2014, a European intelligence service, a NATO ally of the United States, received a top-secret report that the Russians would back Donald Trump for the White House in the next election. The source was a mid-level Russian intelligence official who had plausible access to secret Kremlin plans.

Moreover, this source had a track record of providing accurate information, so his Trump bombshell merited examination. However, our partners determined that the notion was so absurd—after all, Trump was a reality TV star, a mere carnival barker, not a serious person—that the report had to be Russian disinformation. The source was put “on ice” for several months and his information was not shared with the Americans, since our friends didn’t want to appear so foolish as to suggest Donald Trump would run for president with secret Russian help.

However, American intelligence was hearing similar whispers back in early 2014. The National Security Agency’s global signals intelligence apparatus picked up conversations about a coming Trump presidential run with Kremlin backing. These were what the SIGINT world calls “reflections”—that is, Russians talking to other Russians, without Americans (much less Team Trump members) involved. These intercepted conversations included discussions of Trump’s coming White House run and how Moscow planned to boost him; the SIGINT involved, while not detailed, left the indelible impression that this secret effort had approval from “the top” in the Kremlin. Some of NSA’s foreign spy partners intercepted similar conversations in 2014.

Of greatest interest, NSA and its partners noted a spike in Kremlin conversations about Trump and the presidency in mid-November 2013, which was when Donald Trump was in Moscow for the Miss Universe pageant. While that visit has been the source of considerable salacious gossip—both in the notorious Steele dossier and in subsequent Kremlin efforts to fool American intelligence—for its alleged sexual shenanigans, its real purpose may have been more serious and sinister, according to several U.S. and Allied intelligence officials I’ve discussed the matter with.

Based on SIGINT reflections back in November 2013, it appeared likely that Trump had discussions with Kremlin officials when he was visiting Moscow, in preparation for his coming run for the White House. “It’s one hell of a coincidence,” an NSA official told me, “that high-ranking Russians suddenly start talking about getting Trump in the White House right after he’s in Moscow.” It’s unclear what intelligence, if any, was shared with the Obama White House about these SIGINT reflections, since its conclusions were tentative; there was no top-secret “smoking gun.” We can hope that Bob Mueller and his prosecutors will now get to the bottom of this murky intelligence puzzle.

In the meantime, President Trump keeps rage-tweeting. In the last 24 hours, he has issued bizarre rants against prominent Democrats involved in the Russia probe, patently false claims that he never denied Russian attacks on our election, put-downs of his own National Security Council boss, and, most insidiously, the claim that the FBI failed to prevent the recent terrible school shooting in Florida because the Bureau was spending too much time on the Russia investigation. That vile assertion has no basis in any fact or reality and betrays a highly stressed president under siege, without off-ramps, who knows that more indictments are coming his way. 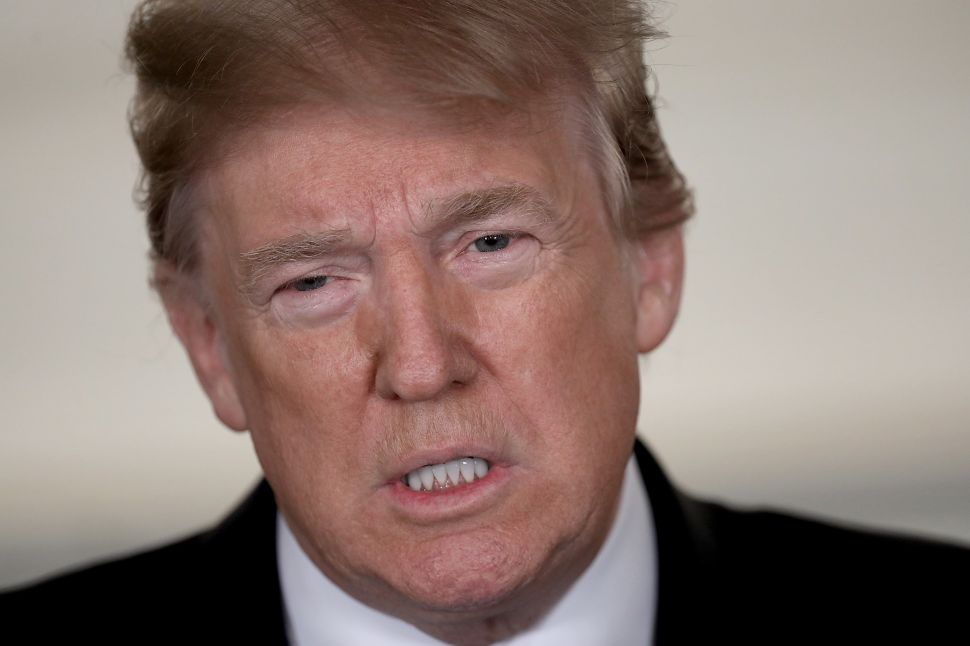