Former City Council Speaker Melissa Mark-Viverito, a Puerto Rico native, is ramping up efforts to increase Latino representation in key states around the country with significant Latino voting blocs ahead of the 2018 midterm elections.

Last month, Mark-Viverito announced that she was joining the Latino Victory Fund—a political action committee (PAC) that works to get progressive Latino candidates elected at all levels of government—as a senior adviser.

Her job will consist of looking for and enlisting candidates, enhancing the PAC’s fundraising and state infrastructure, and working to start state chapters in Florida, Georgia, Arizona and Nevada—particularly with a focus on the 2018 midterm elections, according to POLITICO.

Mark-Viverito has been rumored to be weighing bids for mayor of New York City, Congress and governor of Puerto Rico. She recently ruled out a Puerto Rican gubernatorial bid.

When asked about swing states where Latino voters are essential and decisive such as Florida, Colorado, Nevada and Arizona—depending on the race—she noted those states are on her radar.

“We’re looking particularly at ones that we have our eye on, obviously Florida,” she told NY1 political anchor Errol Louis on Wednesday night. “We are talking about Arizona, Nevada, Texas and possibly Georgia as well. So we have to look within that, what are the midterm elections and in some cases, there’re some statewide races that are important, too.”

The Latino population hit nearly 58 million in 2016, accounting for half of national population growth since 2000, according to a report by the Pew Research Center in September 2017. And 66,000 Latinos turn 18—the age at which people can start voting—each month, another Pew report found.

Indeed, Mark-Viverito argued that focusing on statewide races is key to ensuring that Latino candidates gain the skills and experience needed to advance to higher-level positions.

“It’s not just about the midterm elections but also creating the pipelines within those states, where if you elect people at more local levels of government, then you create a pathway, right, for Latino candidates to be eligible and be experienced to run in these other seats,” she continued.

She acknowledged recruiting candidates will be “a lot of work” but noted the PAC is “not gonna do this alone.”

“It’s gonna be done in coalition and collaboration, but I’m very excited because after 2016 and the direction that this country is going in, I definitely wanted to play a role in making sure that we figure out a pathway to take back the Congress and create true checks and balances in this government,” Mark-Viverito added, referring to the administration of President Donald Trump.

Mark-Viverito also said that there may not be a “substantial bloc” of Latino voters in states such as North Carolina and Georgia but suggested there may be enough of a presence to merit some additional resources.

“It could be enough of a bloc to create a swing situation in a particular election,” the former speaker said. “So that’s those kind of analyses that we have to do and then be able to hone in and focus on where we can make a true impact.”

She maintained the PAC wants to make sure it is providing necessary tools and resources as opposed to merely endorsing candidates.

“We don’t just wanna give an endorsement,” she continued. “We wanna bring technical assistance, resources to those candidates, so that we can be sure that they do win their races and that agin, we bring some semblance of democracy back to this country.” 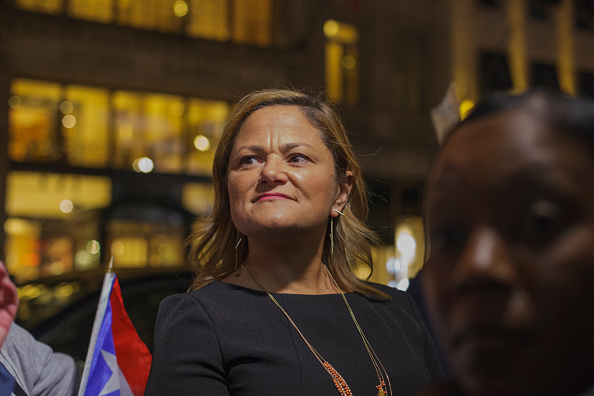