Lynne Patton, an event planner whom President Donald Trump appointed last year to the New York-New Jersey office of the U.S. Department of Housing and Urban Development (HUD), railed against mainstream media outlets, which she claimed have “declared war on minority conservatives.”

At a Black History Month event hosted by the Harlem Republican Club and Manhattan GOP chairwoman Andrea Catsimatidis in Harlem on Sunday afternoon, Patton said she was addressing the audience of roughly 50 people—mostly black conservatives—in her capacity as a keynote speaker at the Republican National Convention last July and not as a HUD official.

She weighed in on what she believes to be the mainstream media’s “determination to define us.”

“What I mean is, to erect barriers, to bring this country back to the Jim Crow days of division, and they have especially declared war on minority conservatives and I’ll tell you why: because we are an enigma to them,” Patton said. “As you know, what we don’t understand, we inherently fear. So by virtue of that, they must define us. After all, to define the definition of a minority conservative is to make folks feel superior, it puts them back in their comfort zone.”

She referred to a quote by African-American leader Booker T. Washington in which he criticized a “certain class of race-problem solvers who don’t want the patient to get well” because their success is contingent on maximizing their problems.

“They don’t understand why the black conservative does not fall lockstep in line with the Democratic narrative, like all the other good minorities who behave and know their place in the voting booth,” she continued.

She also noted media outlets referred to her as a wedding planner when reporting on her appointment to HUD, calling out publications such as The Washington Post, Nigerian Weekly, The New York Times and the Huffington Post for what she said was “lazy journalism and internet parroting.” Other publications also referred to her as a wedding planner, including The Los Angeles Times, CNN, Vanity Fair  and Observer.

“What we have now are arguably bloggers posing as journalists, and so they create a false narrative based on photos of me wedding dress shopping with Lara Trump and my social media—who also happens to be my best friend—instead of Googling who is Eric Trump’s wedding planner and easily discovering a 2014 People magazine article with the actual wedding planner,” Patton added.

And she said First Daughter Ivanka Trump told her that if she was a Democrat, the narrative would have been framed in a more positive light.

“Instead, because I am a Republican—and a minority one at that—the narrative is that Lynne and Ben Carson have no experience and no idea what they’re doing because we are black conservatives, and I will never stop advocating for this man [Trump], for his family, for his vision, for this country and it drives them crazy,” she said.

She also sought to minimize accusations of racism against Trump, claiming that he sees the world “through one lens and that is an economic one.” In May 2016, Patton starred in a viral Youtube video called “The Trump Family That I Know,” which sought to defend the president.

Patton told the black conservatives in attendance that she has been called “coon, Uncle Tom and House Negro.”

“My own uncle stopped speaking to me shortly after I released a video…’The Trump Family That I Know,'” she continued, fighting back tears. “By the time I spoke at the RNC, no less than five direct relatives have ceased all contact with me, and I know I can go around this room and hear countless identical stories.”

HUD reached out to Observer on Tuesday to note that Patton has recused herself from all matters pertaining to Starrett City given the president’s ownership interest. 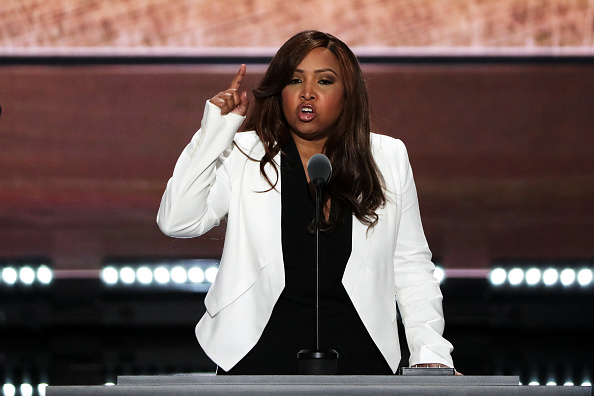