The place and date for this meeting are not insignificant. Almost everything the Russian president does is layered with meaning. The two leaders are meeting as the 2018 Winter Olympics get under way. And they are meeting in the city where, in 2014, Russia hosted the Winter Olympics. Putin likes to remind people of the role he plays in the world, and he likes to conduct diplomacy in Sochi.

The meeting was confirmed both by Russian and Palestinian sources.

Foremost on Abbas’ agenda is his desire to see Russia take the lead in peace talks between Palestine and Israel. A Palestinian official articulated Palestinians’ frustration and suggested Russian diplomatic intervention. According to this official, the United States is no longer a trusted mediator.

In short, Abbas wants to bench the United States in any Palestinian peace negotiations. In place of the U.S., he wants to install Russia.

The Palestinian official said, “We are hoping that Russia and the EU will step in to fill the void.” He continued, “We believe that these countries should and can play a larger role in any peace process in the wake of the Trump administration’s hostile policies toward the Palestinians and bias in favor of Israel.”

It’s no secret that the Palestinians are peeved with the Trump administration for declaring that the United States recognizes Jerusalem as Israel’s capital and is moving its embassy from Tel Aviv to Jerusalem.

Responding to what the Palestinians deem as U.S. hostility and bias against them, Abbas has constructed a plan to express his dissatisfaction and flex his diplomatic muscles. His goal is to illustrate that the Palestinians have power and that they are not simply passive pawns in the game. This meeting in Sochi is one of his moves.

Another move is Abbas’ appearance before the United Nations Security Council, which is scheduled for February 20. The Arabic press has hinted that Abbas will ask for a resolution to be voted upon both in the General Assembly and in the Security Council recognizing the State of Palestine.

If Abbas does indeed go ahead and ask for the vote, the outcome is inevitable. The United States will veto the vote in the Security Council.

In a major speech he delivered in Arabic, for Arab world consumption, Abbas voiced his opposition to U.S. policy by saying that the United States cannot force the Palestinians into an agreement. In this speech, he made the point about the U.S. not being trusted as an honest mediator. He said that the U.S. cannot force the Palestinians to sign a peace deal and cannot impose a peace treaty.

For added emphasis, Abbas held up his pen as a prop and said, “This is our pen, and we are the only ones who can sign.” It was a strong symbolic gesture.

Abbas continued on to say that the Palestinians will only sign a deal if it includes a Palestinian state in the West Bank and Gaza and with East Jerusalem as the capital. He said it should include all the areas in the pre-1967 borders.

The Palestinian president has high hopes. He hopes to undermine the United States first in its role as mediator in peace talks with Israel and then, by extension, to undermine U.S. influence in the region and in the world. Abbas will not succeed. The anger will subside and the U.S. will coax the Palestinians back to the peace table.

Russia knows that Abbas will not succeed.

Russia and Israel have a very good relationship. Putin and Netanyahu meet and speak regularly. Those conversations are about practical matters and issues of mutual interest. Israel fundamentally cannot trust Russia to understand and protect Israeli interests. Israel knows that Russia under Putin is only interested in advancing Russian interests.

Micah Halpern is a political and foreign affairs commentator. 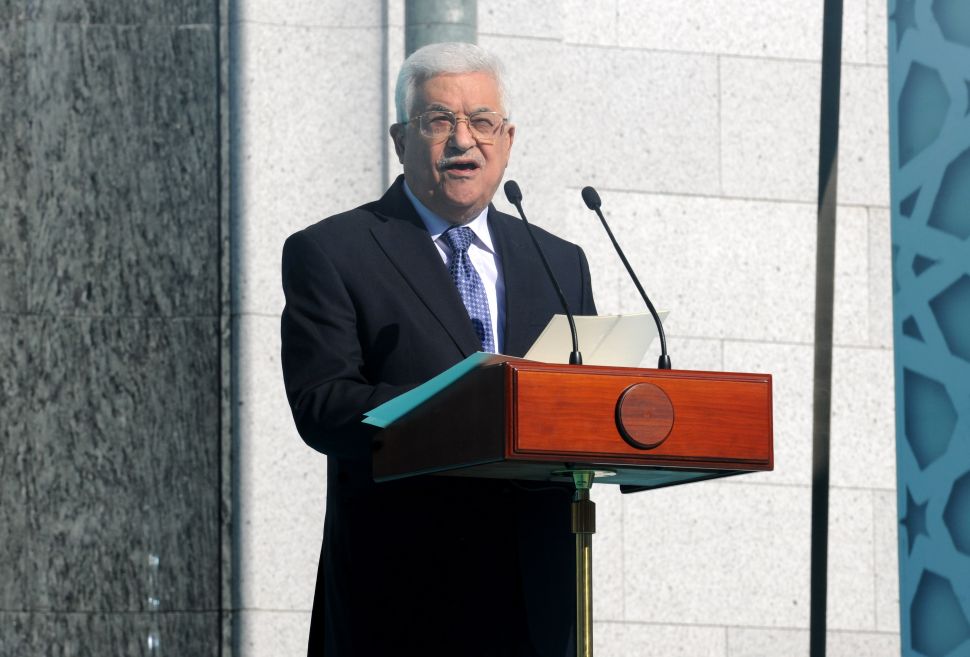