As fashion month sweeps from New York to London, through Milan and finally wrapping up in Paris, there are plenty of models to discuss. That includes the usual crowd—Gigi and Bella Hadid and Kaia Gerber—strolling down countless runways. There are the no-shows, like Kendall Jenner, who seems to be sitting out this entire season and the comebacks, like Cara Delevingne at Burberry. And then there are the old school girls, including Kate Moss, who was recently spotted at the Yves Saint Laurent Show.

But big names aside, there are plenty of lesser-known mods making headlines, from the up-and-comers making their debut in New York to the gaggle of regal catwalkers that were tapped by Dolce & Gabbana. Here, we’ve found three models that are worth talking about, whether it has to do with their background in the sciences or their record-smashing achievements.

The trend of royals hitting the runway seems to be a big one this season. While Princess Diana’s niece and the three Manners sisters were cast in Dolce & Gabbana’s Secrets & Diamonds show in Milan, a regal Dane is the latest sovereign to be making headlines.

That would be Prince Nikolai of Denmark, who walked in the Burberry show during London Fashion Week. You’ll note that he wore a kilt over pants—with no shirt—in one look and a classic Burberry check shirt in another. It’s clear that this Prince has a knack for the runway.

The 18-year-old, whose parents are Prince Joachim and Alexandra, Countess of Frederiksborg, is seventh in line to the throne. And, according to Elle, he just signed with Scoop Models, a Denmark-based agency. Since Nikolai’s father excused him from royal duties in 2017, he will never inherit land, money, or a title from his royal family, so he’s free to engage in a slew of normal teen activities. Apparently, that translates to pursuing a career in modeling.

Considering this eligible royal has the looks and the walk to make it, he’s destined to become a fixture at Men’s Fashion Week in no time.

@peterpilotto thanks so much for having me in your fabulous show 😎 so, so cool!

You don’t have to study neuroscience and cell biology to excel in fashion—but that hasn’t hurt for rising model Ninouk Akkerman. The 23-year-old, who hails from Boekelo, Netherlands, has taken a break from her classes to hit the Fall 2018 runways for the likes of Gucci, Oscar de la Renta, Self Portrait, Peter Pilotto and, most recently, Dior.

Akkerman, who comes from a family of academics, never really considered getting into modeling—despite being approached by casting agents a handful of times. However, following her friend’s advice at the age of 20 (which is rather old in the modeling world), she reached out to an agency in Amsterdam and the rest, as they say, is history.

This passionate scientist does have plans to return to her studies, with the hopes of obtaining a master’s degree in neuroscience. “My main interest is in cell biology, which I studied in university,” she told Vogue. “It really annoys me when people misrepresent scientific findings or spread plain bullshit, especially concerning medicine or alternative treatments. Some of it may be harmless, but this is definitely not always the case.”

PRADA WORLDWIDE EXCLUSIVE. This is something that I'd only dream of. Thank you Ms Prada, Olivier Rizzo @willyvanderperre @ashleybrokaw @kylehagler and the Next team for giving the little girl from Manch a chance. Can't believe I'm the first black woman to open for Prada since queen @iamnaomicampbell, forever grateful. And thank you to @patmcgrathreal @cheriejohnson56 and @guidopalau they made me look extra chic – PRADA CHIC 😂💋

Catching the eye of Miuccia Prada is no small feat. So when Anok Yai became the first black model to open the Prada show since 1997—when Naomi Campbell was given that honor—she was deserving of praise.

“Me opening for one of the top fashion houses is a statement to the world—especially for black women—that their beauty is something that deserves to be celebrated,” the 19-year-old told British Vogue. She found out she would be opening the show just an hour before it started and, naturally, felt a bit nervous.

Born in Egypt and raised in the U.S. by Sudanese parents, Yai first entered the public eye when an Instagram of her at Howard University’s homecoming in October 2017 went viral. Snapped by photographer @TheSunk, the picture grabbed the attention of Next Models, who signed Yai to their roster not long after. However, Yai wasn’t confident that she had what it takes to be a model.

“I had always wanted to be model, but I was very hesitant. I wasn’t sure how well I would do in the industry because it’s always changing,” she explained to Vogue.

While Yai can now be spotted in Prada’s Spring 2018 campaign, you won’t see her on any other runways this season; Prada locked her in as a worldwide exclusive. However, we’re sure this isn’t the last we’ll see of her sharp cheekbones and plush pout. 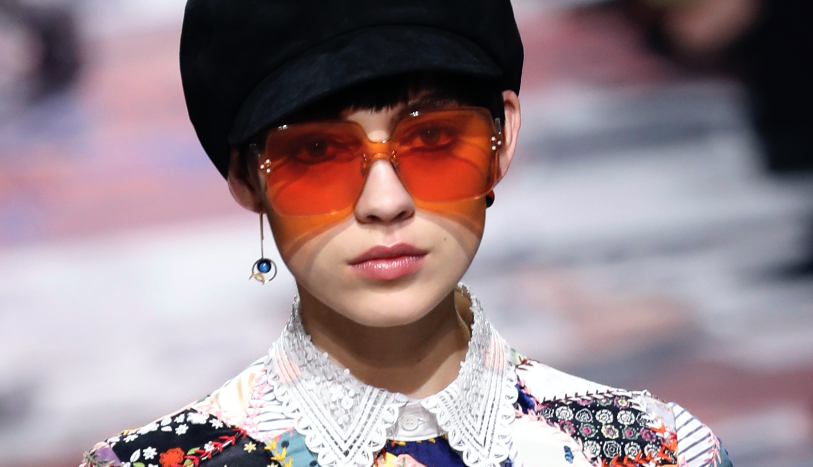