When Mayor Richard J. Daley ran Chicago a half-century ago, he used a word to describe malicious gossip spread by his political enemies.

“I resent those ‘insinuendos,’” Daley said.

Mika Brzezinski must be a spiritual descendent of “Da Mare” because she resents Michael Wolff’s insinuendos about executive branch sex, and she attacked him for them Thursday on Morning Joe on MSNBC.

Late in an interview with the author of the hot, hit book Fire and Fury: Inside the Trump White House, Brzezinski and panelist Susan Del Percio ambushed Wolff, beat him up verbally, and kicked him off the show. Wolff’s critics would say he deserved it.

The issue was Wolff’s veiled hint—never specific—that President Donald Trump and United Nations Ambassador Nikki Haley might be having a sexual affair.

DEL PERCIO: “You made some news this weekend talking about things you don’t know first-hand, saying that you believed it was true, but you had no proof that the president had an affair with someone in his administration.”

WOLFF: “What I inferred was that the president is—um, um—is that many of the people around the president believe he is still involved with various women.”

Brzezinski’s body language was interesting. Early in the segment, she sat with arms tightly folded, glaring at Wolff while others asked about other subjects. When Del Percio jumped ugly with Wolff, Brzezinski gestured with her hand to Del Percio as if to calm her down.

She expressed exasperation over Wolff’s disingenuous obfuscation—how he pretended to be shocked that Haley denied something for which she was never accused.

Of course, he started the rumor himself but never referred to her by name. Then he reacted to her reaction. Brzezinski didn’t appreciate Wolff’s coy ploy to have it both ways.

“You said she has embraced it,” Brzezinski said. “You might be having a fun time playing a little game dancing around this. But you’re slurring a woman. It’s disgraceful… You’re on the set of Morning Joe. We don’t B.S. here. I’m sorry. This is awkward. You’re on the set here with us. We’re done.”

As she spoke, Brzezinski took a few sheets of paper in her hands and twice stacked them with sharp raps on the table as if she were a judge wrapping up a case by announcing a verdict and pounding a gavel.

She cut to a commercial break, perhaps a bit early, and seemed to signal this break with format to her control room with a hand gesture.

It’s the kind of hook you see Tucker Carlson and Laura Ingraham give to antagonistic guests on Fox News Channel but rarely seen on MSNBC or CNN. And it was quite a display of pique between two of Trump’s top critics.

In the era of #MeToo, Wolff comes dangerously close to recklessly slut-shaming Haley by extension while stalking his real target, Trump.

Note that even on MoJo Thursday, Wolff said, “Many of the people around the president believe he is still involved with various women.” He used the plural and the present tense and the word “still.”

Supporting Wolff’s primary insinuendo is Trump’s behavior that was recently reported by the Wall Street Journal. The Journal said Trump’s lawyer paid a sex-film actress $130,000 before the 2016 election to keep quiet about a romantic fling she had with Trump in 2006 right after Trump’s third wife gave birth.

That wife, Melania, bowed out of a European trip with Trump right after the Journal’s revelations. For the State of the Union address on Tuesday night, Melania Trump and Donald Trump took separate cars from the White House to Capitol Hill.

In that several women last year accused Trump of sexual harassment—and he failed to sue them, as threatened—rumors of such Trump behavior make a valid topic for journalistic attention. Two decades ago, President Bill Clinton was impeached for lying about consensual sexual behavior with a White House intern.

But Brzezinski rightly picked up on how Wolff’s rumor-mongering involves collateral damage to people like Haley in a traditionally sexist trope. While she anchored from New York, Joe Scarborough did the same from Washington and was not involved in the exchange with Wolff.

Minutes after leaving the MSNBC set, Wolff began a Twitter barrage that included, “The last time I was on Morning Joe off camera Joe and Mika eager to gossip about who Trump might be sleeping with.”

“To be invited on a show with the purpose of being thrown off is the new television,” he wrote.

A deeply cynical viewer might suggest the whole thing was a setup on both sides to create buzz about both the book and the show while making Brzezinski look righteous.

But that’s a step too far. Her annoyance seemed genuine. Wolff knows how to sandbag people. This time, he got his. He’ll survive. 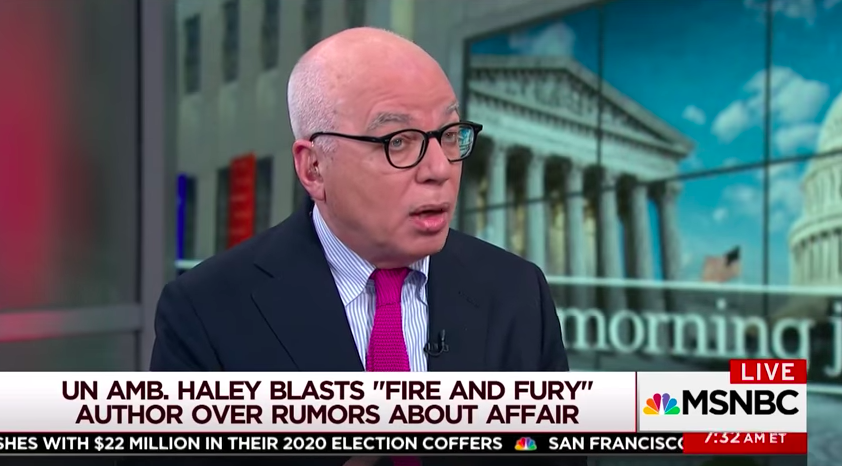